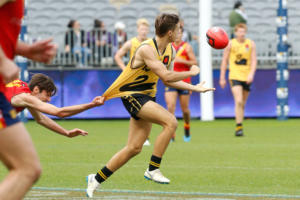 DRAFT ANALYSIS: "A potential smoky based on his athletic traits and penetrating kick, Johnson just needs a year in the gym to build both strength and endurance to be a more rounded player."

BEN Johnson is a running defender from West Perth who has been described as a “superboot” with his penetrating kick. The Whitfords junior, like many of the elite WA talent had an extremely positive 2019 season. He is one of those defenders that is a two-way player as he is able to set up forward thrusts with his elite speed, but is just as comfortable locking down on an opponent. Johnson gained great experience playing seniors for the Falcons in a couple of games towards the end of the season as well as playing some impressive football during the Under 18s national carnival. Like any young talents, Johnson has a number of areas he still has to work on, first and foremostly being his size and physicality. Johnson also needs to improve his endurance to be able to run out games for longer and provide greater consistency throughout, potentially allowing him to develop into a midfielder in the future.

Johnson put his name in the forefront of recruiters minds with a performance against the Allies that included 23 disposals, eight marks, five rebounding 50s and four inside 50s. He was also more than serviceable against Vic Metro with 11 disposals and two goals. His form for West Perth throughout the season was extremely consistent which led to the youngster being named in the WAFL Colts Team of the Season. Two very impressive games after he returned from the carnival resulted in an elevation to senior ranks. The youngster could not ask for any more daunting fixtures to make his League debut than the all-conquering Subiaco line-up who had lost one game in nearly two seasons, and a top three quality outfit in South Fremantle. But you will not get better as a player if you do not face challenges, and Johnson would have learnt a lot from both encounters. Johnson returned to the Colts level for the finals and averaged 19 disposals, four marks and tackles as West Perth bowed out in the Preliminary final to Claremont. Throughout the year, Johnson showed off his ability as that rebounding defender who was able to both negate an opponent, as well as provide drive and run out of defence.

His lightning speed and penetrating kick allowed him to have serious talent coming off half-back, with a high hurt factor going forward. Being a lightly built player, and one with a low endurance base, Johnson found out the improvements he has to make stepping up to senior football after those back-to-back League games where he collected just a combined 15 touches – his lowest total in an individual Colts game was 11. While he is not a massive accumulator of the football as it is, he could certainly find more of the ball with improved endurance and certainly having a bigger frame will also assist. At the National Draft Combine, Johnson smashed the 20m sprint with an eye-opening 2.885 seconds, to rank second overall, while also recording a 70cm standing vertical jump which was third overall. His yo-yo (20.3) and 2km time trial (7:04 minutes) exemplified his need to increasing his endurance. By any measure, Johnson would be referred to as a small defender. Measuring in at 180cm, to outmuscle opponents at the top level, he would certainly need to add a bit of bulk to his slender 65kg frame. But if you are looking for a key element that scouts would look for it is pace and Johnson has that in spades. The term ‘smokey’ gets thrown out at this time of year and It would not surprise to see the West Perth youngster picked earlier than expected.