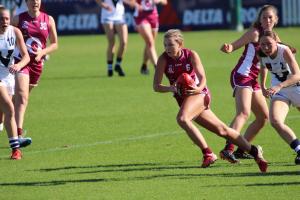 Bella Smith is a strong inside midfielder who excels at the coal face and is capable of getting it clear from congestion with clean hands and power.

Bella Smith is a prototype inside midfielder with all the traits required to step straight into a senior midfield spot. Hailing from Maroochydore, Smith is an inside bull who can win the ball at ground level or in the air and has a presence around the stoppages. She is clean by hand and has great power that helps her create separation from opponents.

A key improvement for her is to keep improving her outside game and winning more of it on the spread. Once she does that and can tidy up those areas going forward, she will be a dual threat. Her bread and butter of slotting into the contest and using her strength and power to transition the ball from the inside to the outside is what stands out, and she does have clean hands to distribute to the right option running on the outside of the stoppages.

A key member of the Roos side in the QAFL Women’s, Smith represented Queensland in the AFL Women’s Under 19 Championships match with Vic Country, and finished with the 14 touches and five marks. Whilst she only had the one clearance, it was not indicative of her usual impact in there, and she played a team role alongside the likes of Teagan Levi and Abby Hewett.

Going forward it is anticipated that the Brisbane Lions Academy member will continue to work on her outside craft in order to build a more complete game. She has the inside prowess and power to transition into other positions around the ground, and could even be a forward who can win the ball on the lead or at ground level.

As a whole, Smith is one of Queensland’s top prospects and has room for improvement to iron out areas of her game for the future.

“At this point in time I’m just taking everything week by week and just trying to play well in my QAFL games. “But the end goal is definitely to get drafted. “(The Academy) is awesome. It’s such a good experience to get around girls that are like-minded. We got to catch up all together not too long ago down in Melbourne.” – Bella Smith via “Smith taking things “week by week””

“Being thrown about in all thirds of the ground, Smith was able to maintain a consistent level of pressure, whilst chiming in with quality disposals when she got it. Her strength and speed around stoppages was a big advantage over her opponents, unable to be matched for speed when she locked on to a loose ball. With those strengths, her game is sure to translate well to the next level.” – Declan Reeve via “QAFLW Player Focus: Maggie Harmer and Bella Smith (Maroochydore/Brisbane Lions Academy)

“Appeared to be one of the smarter users of the footy through the game, with her willingness to move the ball by hand and look for wider options opening the game up for Queensland really well, especially in the first half. When not using it by hand, Smith was proactive in looking to get the ball moving with switch kicks, putting the ball in front of teammates to run onto if they weren’t in an optimal position for the kick. She also held her own in contested situations really well, keeping her feet even in an outnumbered situation to keep battling for the ball and making it difficult for country to move out.” – Declan Reeve via “Top Performers – AFLW U19 Championships: Vic Country vs. Queensland”

“Strong at the contest playing on the inside, she sometimes rushed the disposal when moving, but her contested ball ability was outstanding. She just ripped the ball at ground level to clear it, and kept winning it in close using her bigger frame to advantage. She proved hard to bring down in a tackle and charged at every stoppage, and even had a chance on goal through a snap in the third term.” – Peter Williams via “Top Performers: Queensland Under 19s vs. Coorparoo”