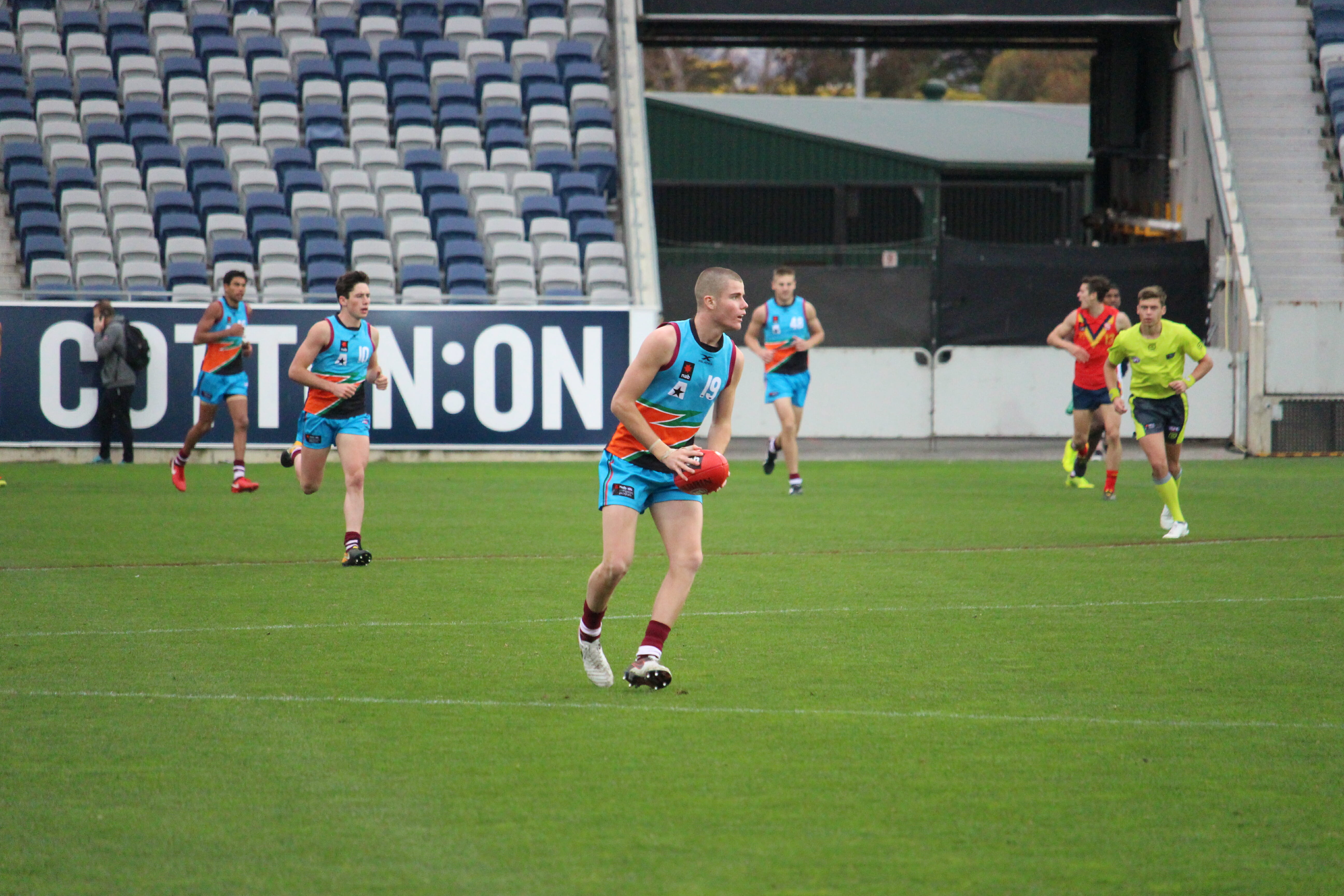 DRAFT ANALYSIS: “A versatile midfielder who works hard around the ground and is a neat user of the ball."

Bailey Scott has been on the radar for a few years now, he impressed playing for the Allies last year as a bottom ager where he was able to hit the scoreboard playing mostly on a forward flank. Scott’s permanent move into a midfield role was seamless and he was rewarded for his good form in the NAB AFL Under 18 All Australian Team named in the forward line, Scott was a constant ball winner both inside and outside the contest for the Allies and was a worthy selection as an all Australian. Scott had multiple choices for an AFL team being tied to the Gold Coast academy as well as being a father son prospect for both Geelong and North Melbourne, he would eventually nominate North Melbourne where he will look to build up his light frame playing for their VFL team, he also got to train with the club during the off-season so his transition into their training program should be seamless and North Melbourne’s fans should be excited about this well spoken and driven young man.

Scott is a natural footballer and it shows, he doesn’t fumble with his hands amongst the cleanest in this years draft, he can pick up the ball below his knees with ease and quickly get his arms up to release with a clean handball with helps him in winning the ball in close. He doesn’t have a big frame so he mostly plays on the outside but when he does go in he shows good stoppage craft and you can see him being the type of player that has a good mix of inside and outside ability. Scott has a good kicking action which is usually well weighted and rarely erratic, his skill level in general is neat and tidy where he rarely tries to over exert himself or pick the dangerous option. His kicking consistency can improve further, but when he is “on” he uses it well and can be damaging to opposition teams.

Scott is a hard worker around the ground and he will push to defence to help out the defenders and when forward he will lead up at the ball where he shows to be surprisingly solid overhead. Scott is a good finisher in front of goal with a good technique with both set shots and on the run, he is a player that will win plenty of the ball and you can be comfortable he wont make a wrong choice or turn the ball over.

Scott doesn’t have many glaring improvements. What he needs to work on is just overall consistency, because his kicking for example can be a joy to watch at times, whereas other times, he can make mistakes by foot. He has floated in and out of games at times, which is all part of the learning process, and spend the great deal . of his National Under 18 Championships on the outside as a wing or forward. Scott is still lightly framed and he will need to build his strength up to have an impact at AFL level, he is a nice height so when he does get the strength he should be able to hold his own at stoppages at AFL level. Added bulk shouldn’t effect his game since his playing style does not really rely on being wiry or speedy, added bulk can only be a positive to compliment the way Scott plays.

Bailey Scott is one of the most well rounded footballers in this draft with his skill set, ball winning ability, scoreboard impact and developing body make him an exciting prospect for North Melbourne fans, Scott is proven to be a hard worker with a likeable character who is expected to work hard to eventually become one of North Melbourne’s more promising midfielders along with fellow Allies teammate Tarryn Thomas. Scott has had two years of good form on his side where his consistency and skill level should see him getting bid on in the second Round where North Melbourne would be happy to match, if it all clicks for Scott North Melbourne should have a future goal kicking midfielder capable of playing anywhere if needed.