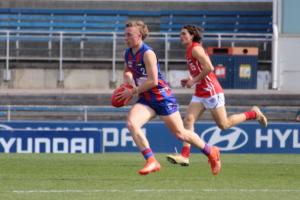 DRAFT ANALYSIS: “Laurie is a crafty midfielder/forward who loves to take the game on and can carve up the opposition with his attacking creativity.” – Michael Alvaro

Having put together a sensational NAB League finals series which ended in premiership glory last year, Oakleigh’s Bailey Laurie consolidated his high standing among the Chargers’ raft of elite 2020 AFL Draft prospects. The diminutive midfielder/forward is a high impact player in attack, able to tear games open with his magnificent evasion and ability to hit targets by foot in full flight. Most of his work as a bottom-ager was done at half-forward, where Laurie worked hard to find space and receive in all the right areas to not only set up scoring opportunities for his teammates, but also for himself. The 179cm prospect booted six goals in his seven NAB League games last year, including two in the Grand Final to set the tone for his side. He also ran out for Caulfield Grammar during the APS football season, with his overall form enough to earn passage into the Vic Metro Academy hub for 2020. While he has not been able to show his wares on-field this year, Laurie earned a National Combine invite and remains an exciting talent destined for the elite level.

Laurie is the exactly the type of player fans, coaches, and forwards alike would all love to see delivering the ball inside attacking 50. As somewhat of a high half-forward for Oakleigh last year, he was able to work up the ground and then burn the opposition on the way back time and time again. He is so damaging when receiving the ball just outside the 50-metre arc, with his turn of speed and efficiency by foot combining to make hitting targets almost inevitable. As a small, he has the quick-mindedness and reflex actions you would expect of a 179cm player, and he hardly wastes a possession in the front half.

Something which aids Laurie’s burning efficiency is his poise amid chaos. He is one of the most agile players in the draft pool, proving as much with a preseason agility test time of 7.97 seconds. Most importantly, he translates those numbers onto the field as he wheels into attack, able to gather the ball cleanly and work his way out of tight spots with incredible lateral movement. High-level smarts and awareness also come to the fore in these situations, as he has the vision to pick out teammates by hand in a flash while also knowing just where his opponents are coming from. Laurie finished 2019 with an uncontested possession rate of 63 per cent, though that is not entirely indicative of the amount of ball he finds in congestion – it is just that he weaves his way into space so easily.

Speaking of finding space, Laurie’s work-rate is something which also stands out. As previously alluded to, he gains good separation from his direct opponent in transition, only compounding the damage he deals when allowed such time and space to operate. He also sneaks forward well and has a happy knack of being in the best spot to mark uncontested. It is not just down to luck either, with Laurie’s running capacity highlighted by a 2km time trial result of 6:24 at the Draft Combine. He is not particularly quick, but gets his legs pumping in short spurts and makes things happen in a flash. Add to that an eye-catching side-step, and Laurie is an excitement machine.

In terms of an overall attacking game, Laurie has just the right weapons to have a huge impact on each contest. The kind of x-factor he brings; to burst out of congestion, hit an impossible target, or kick a team-lifting goal, makes for an immeasurable kind of value any coach would love to be able to rely on. It is no wonder his teammates love running out alongside him too, with his character and skill both making him one of the favourite teammates among Oakleigh, Caulfield Grammar, and Vic Metro players. He can do the defensive stuff too, averaging 3.6 tackles per game last year and obviously getting up the ground a heap.

One of the most exciting aspects of Laurie’s bottom-age campaign was the potential he showed to move into midfield. Having been squeezed out last year by the likes of Matt Rowell, Noah Anderson, and Will Phillips, Laurie was poised to rotate a touch more on-ball during his NAB League outings. With such class in congestion, clean skills, and the running capacity to match, Laurie could well have made the transition. His size and strength may be a hindering factor in that kind of move at AFL level, and Laurie’s four-quarter consistency would also need to lift. He can impact games massively within a quarter, as he did in last year’s Grand Final, but can then fade a touch as the contest wares on. Sustaining his output will be key, though he looks set to either start out as a forward or outside midfielder at AFL level, where he can gain a deal of confidence and be more like the impact player he currently is.

Sitting on the precipice of the top 25, Laurie looms as a second round lock come draft time. He had all the potential to move even further up draft boards with strong on-field showings and greater responsibility as a top-ager, but alas was robbed of the opportunity to do so as all Victorian competitions were scrapped. Still, clubs will undoubtedly value the immeasurable traits he provides, such as x-factor and character, while also rating the more visible attributes such as his clean skills, work-rate, and overall attacking acumen. Should he slide out of the top 25, he would be a bargain get and despite his size, could impact early on at the next level with patches of brilliance.