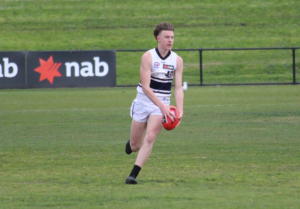 NINETEEN-year-old Ayce Taylor settled into the Northern side with time, building form in the back-end of the year to lock down a permanent position in the back six after also being tried up the other end. Having come from a dual basketball and football background, Taylor committed to football this year and it showed in his game, improving out of sight and gaining confidence to finish as one of the Knights’ most important figures – allowing others to be released in different roles. Taylor’s attacking style from defence combines well with his athleticism, using his vertical leap (89cm running and 78cm standing) to intercept, and speed (2.97-second 20m sprint) to take the game on. His style and improving game sense make him a raw prospect, with consistency and more assured kicking still to come into his game. Remaining a centre half-back at the next level with his size would be a challenge, but transitioning into an intercept or running defender are both options for him given his base.