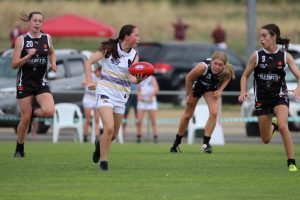 Aurora Smith was one of the massive improvers in the 2021 season, becoming the most prolific wing in the NAB League Girls competition and earning a Vic Country place.

Aurora Smith is a December-born prospect who really came of age in season 2021. After making her NAB League Girls debut a couple of years ago, and having managed seven games prior to 2021 – including the interrupted 2020 season – Smith not only upped her numbers, she practically doubled her disposal average this year when combining those previous two seasons.

Numbers do not always tell the full story, and Smith’s ability to not only accumulate the ball, but provide some great meterage when she tucked the ball under her arm and took off, really helped the Bushrangers turn defence into attack. She is still a raw prospect in terms of the potential she has, and she has only played as a wing for the Bushrangers which is why building more of an inside game is the next step.

In saying that, Smith did get the chance against Queensland at the AFL Women’s Under 19 Championships go inside and she averaged and impressive 16.0 disposals, 3.7 inside 50s and 3.0 tackles across three games. Given her first game against Vic Metro was quiet, Smith exploded in her next two, and was one of the best in both games.

Not only did she show she was capable of playing inside, but she was still able to use her athletic traits – mainly her speed – to exit stoppages. Her work rate is enormous and she manages to just get to contest after contest, which is how she is able to accumulate the ball with ease.

Going forward, Smith will likely look to improve her versatility to have greater impact around the ground, but for now, her impact on the wing is as high as you could expect from an outside runner, and her traits match those who play the role, so expect Smith to be one who can stand up at the next level.

“The premier pure wing in the NAB League Girls competition bounced back from a quiet game against Vic Metro in the AFLW Under 19 Championships, to really dominate in her final two outings against South Australia and Queensland. She knows how to find the ball and is a natural running wing which she showcased all year for Murray Bushrangers. Another player whom given an extra month would be a bottom-ager, really impressed in her draft-eligibly year, averaging 20.7 disposals – almost double what her prior two seasons were. She drove the ball inside 50 four times per game, and had more than two rebound 50s per match as well, providing great run and carry down the wing going forward, something that really caught the eye on a regular basis. – Peter Williams via “Draft Central AFLW Draft Power Rankings – Victorian Pool: June 2021”

“Smith was arguably the most dominant wing in the NAB League Girls competition. A ray of consistency all season even early on when the Bushrangers were struggling, Smith averaged just under 21 disposals, and more than three tackles and three marks per game. Her best work was in her metres gained though, winning the ball on the outside and bursting away with her athleticism to go inside 50 four times a game. At the AFLW Under 19 Championships, Smith spent some time on the inside to add that string to her bow, but expect the wing to be a player who catches the eye of a number of clubs given her 2021 season compiled bigger numbers than her previous two put together. A huge rise and outstanding talent.” – Peter Williams via “Ones to Watch: AFLW Draft surprise packets”

“Traditionally one that plays on the wing and waits patiently for the ball to come out to her, Smith showed that, if required, she may well have a future on the inside as well, with her willingness to put her head over the footy and not move even with incoming front on pressure, being a big part of Country’s ability to force turnovers as she hunted every loose ball that came outside the Country forward 50. She also found ways to impact around stoppages, timing her runs well to be a go to handball option, where she’d follow up with some really well placed and weighted kicks to get Country into space. Her ball use going inside 50 was pivotal at times, almost forcing her teammates to lead to the right spots with her kicks.” – Declan Reeve via “Top Performers – AFLW U19 Championships: Vic Country vs. Queensland”

“Smith was deservedly awarded Murray’s best and fairest for her efforts in 2021, averaging 20.7 disposals, and four inside 50s across her six games. Stationed mostly on the wing before trying her hand on the inside, Smith proved one of the competition’s most consistent performers was a true standout in her region. She went on to represent Vic Country, credit to that ball winning consistency and her turn of speed on the outer.” – Michael Alvaro via “2021 NAB League Girls team review: Murray Bushrangers”