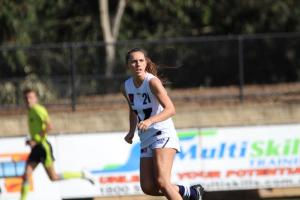 Ashleigh Richards co-captained the Dandenong Stingrays in 2021, and although she has played through the midfield at times, is more than capable of being a damaging forward who can reguarly hit hte scoreboard.

At NAB League Girls level, Ashleigh Richards slotted seven goals in six games this season, at better than a goal a game. It followed on from her four in three games in 2020 having spent time as a defender at Under 16s level. Honing her craft in the forward half, Richards is able to hit pinpoint passes inside 50 to set up teammates, though admits she is continually looking to improve on her variety of kicks. She is a natural leader shown by her captaincy, and has already adapted to senior level, running around with Port Melbourne in the VFL Women’s.

Her versatility of being able to play forward or midfield, or even in defence as she did a couple of years ago will further help her case to advance to the next level, standing at a solid 167cm to be able to play in multiple positions. Spending a lot of time forward, Richards is not a huge possession winner, but can have a high impact on the game, and when deep, has the ability to convert chances into scores. Her marking is an area of improvement, averaging just less than two per game this season, though managed to win more of the ball in space at VLFW level.

Whilst still rounding out areas of her game, Richards’ ability to lead from the front and generate scores from both in-play and set shots makes her a valuable talent for clubs to consider.

“A nice versatile talent, Richards is capable of playing deep forward, high forward or even through the midfield which can be a point of difference for many goal-scoring types. Earning a place with Vic Country, Richards slotted a goal and averaged 11.5 disposals from her two games, backing up a really solid NAB League Girls season. In six games, she averaged the 12.2 disposals, 2.3 tackles and booted seven goals – 1.2 per game – which showed her ability to regularly hit the scoreboard. That form carried into the VFL Women’s where, playing forward, Richards has already booted three goals in three games, averaging 83 disposals and 2.0 marks, able to find space inside 50 against bigger bodies.” – Peter Williams via “2021 AFLW Draft Positional Analysis: Tall/Medium Forwards”

“The co-captain this year alongside Jordan, Richards is another who proved impactful in a couple of roles for the Stingrays. She booted nine goals in seven games having spent a good amount of time up forward, while also showing the ability to rotate through midfield and get her hands on the ball. Like Anthony, she has also gone on to earn selection in the Vic Country squad, while breaking through to crack the VFLW grade with Port Melbourne.” – Michael Alvaro via “2021 NAB League Girls team review: Dandenong Stingrays”

“A really lively performance from the Stingrays’ co-captain who booted two goals and was a clear driving force in the win. Not only did she snag the two majors, but she hit the post and kicked another behind to finish with 2.2 from four scoring shots, and plenty of creativity in the front half of the ground. She also rolled through the midfield at times, laying some fierce tackles and driving the ball forward to be outstanding across the four quarters.” – Peter Williams via “Top Performers: NAB League Girls – Round 7/2c/3b”