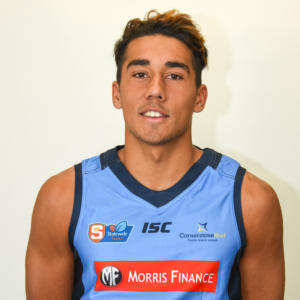 THE younger brother of Mihail played as an inside midfielder this year, becoming a force inside the stoppages with 5.9 tackles per game on top of his ball-winning. He does need to lift his disposal numbers with just 14 touches per game in the Reserves, but given he is readymade with the experience against senior bodies, he is a player who could slot in early on. He has just as much power, strength and raw athleticism as his brother despite being slightly smaller, which worked in his favour in the step-up. Lochowiak was unlucky not to feature for his state in this year’s Under-18 National Championships, but can work on his decision making as he looks to further prove his credentials. An exciting type, and is an interesting fit as an inside midfielder given his outside athletic traits.