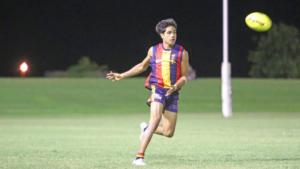 A lightly-built medium forward, Treacy joined Claremont from the amateur leagues with Cable Beach and became a consistent scoring forward with 18 goals in 17 games. He generally used the ball well and made the right decisions with ball-in-hand. He will have to improve his endurance if he is to diversify his roles within a side, particularly a potential midfield role in the future. At 69kg, Treacy still has plenty of room to build size, and his rapid rate of development to go from an amateur league to a draft prospect so quickly shows that he is a capable learner and one who will likely succeed if thrown the challenge at the next level.