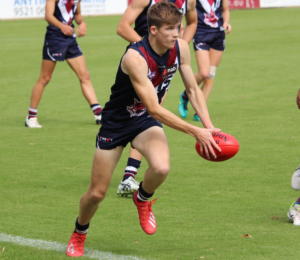 AFTER missing out on joining his brother Ollie (Hawthorn) in the AFL, Hanrahan went back to the Dragons to build up areas of his game. He improved his versatility, spending time at half-back and half-forward and on the wing, providing plenty of run and carry, as well as spread this season. He still has to work on his defensive pressure and contested work, but has made inroads in the other areas this year. A late bloomer in the sense that he did not have a bottom-age season at NAB League level, Hanrahan has added to his game and that rate of improvement will be appealing to AFL clubs. He produced an 81cm running vertical leap at the State Draft Combine, and while his endurance (20.3 on the yo-yo test) could improve, he has a high work rate to still accumulate plenty of the ball. He is still very much an outside mover though, but his ability to nail down his role this year has been admirable and will suit a club looking for what he offers in particular. For a team looking late for an outside mover with neat skills and good decision making, Hanrahan could be your player.