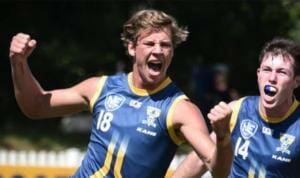 AFTER suffering an Anterior Cruciate Ligament (ACL) injury a couple of years back, Baker has put together a couple of years of good work to emerge as a genuine mature-age option in this year’s draft. Stationed at half-back for Canberra Demons, Baker was an intercept machine, averaging 7.2 marks and 30.6 disposals in the NEAFL. Had an eye-opening 37 disposals, 15 marks and 10 inside 50s against NT Thunder. A number of clubs are keen on the readymade player who could also be released as a tall midfielder if need be. At the State Draft Combine, Baker recorded a 3.04-second 20m sprint which is not too bad for his size, and while his other athletic traits were not overly impressive, he still has strong impact in the air and is hard to bring down in tackles. He has a high hurt factor and of the mature-agers eligible, Baker might be one of the most likely to land at an AFL home given the interest and ability to have an immediate impact.