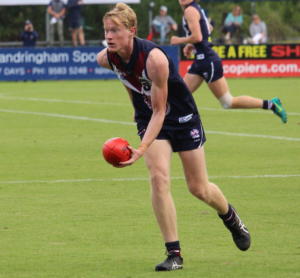 A remarkable athlete, Courtney recorded a whopping 94cm running vertical jump, and an 81cm standing vertical jump at the State Combine. He also clocked a three-second flat 20m sprint, with these attributes making him a handy ruck/forward. His skills and marking leave a lot to be desired, but his raw athleticism will attract clubs as a player who has plenty to improve and build on going forward. While his best traits look like suiting that ruck/forward role, Courtney was tried in every key position post this year and showed promise in each. He clunked a couple of nice marks while hitting up from defence during school footy for St Bede’s, while also having those good moments through the ruck and forward of centre for Sandringham. Building on doing so more consistently and having a greater impact on the game will be what Courtney can work on in the AFL or State system, with talls obviously developing at a slower rate. He could benefit from being one of the few tall options in a draft short on key position players.