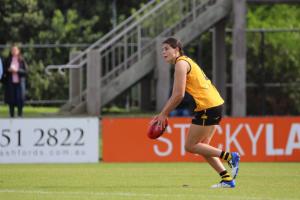 An exciting, developing tall, Amy Franklin is a key position utility with plenty of scope for the future. Boasting some rare athleticism for a player of her size, the Claremont product is able to get it done in the air or on the move, and has shown over the past couple of seasons that she can really turn a game quickly with successive goals in quarters, or go down the opposite end and play in a key defensive post.

Franklin is a tall forward who can also play in defence, given her greatest impact comes inside 50. When speaking to the AFL Women’s Academy member at the AFL Women’s Under 19 Championships, Franklin said she preferred playing forward, but was happy to play whatever role was required of her. She was keen to improve her ground balls in order to become a more complete player, whilst her consistency within games – she can dominate for a quarter then go quiet the next – is another area to watch, though is also symbolic of both being a key forward, and the troubles with forward 50 entries to talls in wet conditions.

When it comes to strengths, Franklin is a rare prospect in the fact that she is strong overhead and does all the right things you would expect of a tall, but can also do the small player things well too. Her athleticism and second efforts are great, with her speed – particularly when doubling back to goal – and her agility are quite impressive, not only for her size, but in general. She moves well and is difficult to beat in the air for smaller opponents, and tough to catch once on the move for bigger opponents.

At the AFL Women’s Under 19 Championships, Franklin missed the first game with concussion, copped a whack to the nose in the second game playing in defence, then stood out in the third game against Vic Metro where she was able to showcase her ability up forward after spending some time in defence. She kicked a goal, and had 12 disposals, two marks, two tackles and two rebound 50s in an all-round performance. Whilst the Tigers were eliminated from the WAFL Women’s competition in the first week of finals, she kick-started them with the opening goal and kicked two goals in a quarter the week before.

Overall Franklin has some serious upside, and with plenty of midfield options going around in this year’s AFLW Draft, as the standout tall in the West Australian pool, she would be one that West Coast would seriously consider with Pick 2. One thing is for sure, whilst still raw, Franklin will provide plenty of exciting highlights in the future.

“With athleticism – in particular speed – that is rare in a player of her size, Franklin is also someone who can clunk contested marks and move well around the ground. She does not need to win a lot of the ball to have an impact in the game, often kicking a couple of goals in a quarter as she did a couple of weeks ago for Claremont against Subiaco in the WAFL Women’s.” – Peter Williams via “2021 AFLW Draft Positional Analysis: Tall/Medium Forwards”

“Franklin had a respectable showing with her stat line, maintaining a consistent impact on the game with her roaming up the ground on the wings, trying to present as a switch option for her teammates. When she was used her ball use was good, whilst not always hitting teammates directly is was always put to their advantage so that they could run onto the ball and collect it easily. Franklin was not used as the main target inside 50 which certainly gave her less opportunity than she could have gotten, but it was obvious the opposition were wary of her, playing Fremantle listed Mim Strom on her at various stages of the game. Franklin’s athleticism for her height is obvious, with her agility one of her more impressive traits for the game.” – Declan Reeve via “WAFLW Player Focus: Amy Franklin (Claremont)”

“I feel like especially since I only started back in 2018, it’s been very rushed and the journey from community footy to now playing footy and League and state footy, it’s crazy. “The intensity and the girls just in general, it’s a completely different ball game.” – Amy Franklin via “Franklin’s “crazy” and “rushed” journey helps fast-track development”