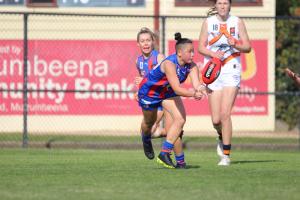 Amanda Ling has caught eyes throughout the season with her relentless hunt of the footy and impressive acceleration, paired with a dangerous sidestep.

Amanda Ling was part of the NAB League Girls Premiers Oakleigh Chargers outfit, where she won best on ground honours in the Grand Final, putting in consistent displays as an inside ball winner who fed it well by hand, in a way which released runners and kept the side moving forward with speed.

That inside prowess combined with her quick hands was a deadly combination across all levels of football she played for season 2021. Ling also possesses an exceptional sidestep and acceleration which she will often utilise to get away from opponents to buy herself more time to balance her disposal, this makes her particularly dangerous around stoppages as opponents struggle to keep up with what she’s doing

Representing Vic Metro at the AFLW Women’s U19 Championships, Ling put in a stellar performance in the game against WA, playing almost exclusively through the midfield she collected 17 disposals, 5 tackles and a goal, stepping up to be a strong contributor in the star studded side. With her form in the NAB League and U19 Championships, Ling earned herself a call up to Port Melbourne VFLW where she looked comfortable matching it with currently listed AFLW players.

In future, Ling may be looking to improve her kicking consistency and penetration, which is generally good but can be affected by pressure or if she is running at her top speed. In regards to her penetration, she often places kicks in front of teammates when she’s free which makes them easier to mark but also easier to intercept, some more direct kicking will make it harder for opposition to cut off her kicks. Improvement in these areas will only make her more dangerous going forward, and a truly hard to stop opponent.

“The first 19th year prospect to feature in this list, Ling has had an outstanding season and shown why the move to an Under 19s competition was important. Despite standing at just 161cm, she is hard to bring down, very slippery in tackles and always able to get her hands free. She is really clean with her hands, and can burst away with a mix of acceleration and endurance, capped off by a high work rate through the midfield. She averaged 17.9 disposals, 2.2 marks, 6.5 tackles and 3.2 inside 50s in season 2021 for the Oakleigh Chargers, whilst playing the two games for Vic Metro thus far, averaging 16 disposals and six tackles. Already managing a game at VFLW level for Port Melbourne and not looking out of place, Ling showed she is a big-game player by taking home the best afield medal in the 2021 NAB League Girls Grand Final.” – Peter Williams via “Draft Central AFLW Draft Power Rankings – Victorian Pool: June 2021”

“Playing an often under-appreciated role, Ling’s ball winning as an in and under type was vital in allowing her other midfield teammates to prosper during the season. As Rowbottom got more and more attention during the season, Ling consistently stepped up to be the main clearance winner, utilising her side step and quick hands to shift past opponents and get the ball out to teammates. She proved herself as an able forward as well in the last match of the home-and-away season, kicking 3.1 stationed almost permanently in the forward 50. She would step up in the most important game of the year, the Grand Final, to win best on ground honours in the victory. A Vic Metro representative and recent Port Melbourne VFLW debutant, Ling has shown she can maintain that form at the higher levels.” – Declan Reeve via “2021 NAB League Girls season review: Oakleigh Chargers”

“The best player afield on the day, those honours were rich reward for Ling’s remarkably consistent season among a team which boasts many stars. Her own star-factor came to the fore on Sunday, with lightning-quick and clean hands on the inside allowing Oakleigh smooth passage out of the centre. She was constantly able to release runners into space with great vision and execution, proving one of the more shrewd decision makers afield. Her zip away from congestion was also evident, as Ling burst away on numerous occasions before sending her side into attack by foot. Usually prominent on the inside, she was able to show nice outside qualities on the day, but was still the primary tone-setter from where it mattered most.” – Michael Alvaro via “Top Performers: 2021 NAB League Girls – Grand Final”

““The week, it was nerve-wracking, definitely,” Ling said. “Knowing that we’d come so far and we just wanted to give it all that we can out on the day, and the girls stayed really positive during trainings and stuff like that, and we all just kept it like any other week, just like any other game and just did what we did and it turned out amazing. “It worked well for us.” – Amanda Ling via “Ling praises team effort in best on ground performance”

“She’s fantastic, she’s a ripper,” Bond said. “We had a conversation with her during the week just about what sort of impact she could have on the grand final, on the big stage. “We said ‘you’re the type of player who could potentially get best on ground’, she impacts around the contest, she just accumulates the possessions, she tackles, she chases, she brings other players into the game. “I think she’s got a future in AFLW and it would be such a fantastic story, she’s a wonderful character and I couldn’t be happier for her to be best on ground in a grand final team.” – Jy Bond via “Bond credits “focused” team in NAB League Girls Grand Final win”