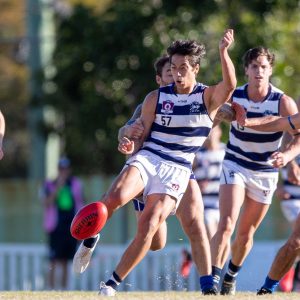 DRAFT ANALYSIS: “Davies is a strong inside midfielder with clean hands, poise, and agility, making him one of the prime extractors in this year’s cohort.” – Michael Alvaro

Alex Davies is not only Gold Coast’s leading Academy prospect this year, but also the most highly-touted Queenslander among a strong statewide crop in 2020. The Cairns native previously relocated south with a host family as he committed to the SUNS’ talent program, with the Sunshine State side able to pre-list him come draft time. It looms as a massive free hit for Gold Coast, with Davies regarded as a first round talent. The tall midfielder has already been compared by some to Collingwood champion Scott Pendlebury, credit to his poise and nous at the contest, so be prepared for the ‘basketball background’ cliché to be rolled out in years to come. He has proven a key figure in the Queensland pathways, donning the Maroon jumper at the Under 16 and 17s levels, while also representing Australia and featuring in the Futures All-Star showcase last year. Davies managed to get on the park for Broadbeach in 2020, before having his season cut short due to an elbow injury. It saw him sit out the Academy Series and the Cats’ run to a senior QAFL Grand Final.

Tall midfielders have long been in-vogue among AFL recruiters, and Davies fits that prototype at a readymade 191cm and 85kg. His MO usually consists of getting first hands on the ball at stoppages and quickly disposing of it, whether that be via a releasing handball or a long, clearing kick. Given his size, the 18-year-old easily outmuscles his junior opponents to gain superior position at the contest, and should be able to play in a similar manner once he transitions to senior level.

Davies’ contested game is not all based on pure brawn, though – there is a good amount of guile to his craft. His usual anchor, or front-and-centre positioning is the ideal spot for any go-to ball winner to take up, and Davies’ high-level spacial awareness allows him to rarely be caught in the clinches. On the rare occasion he is wrapped up, Davies proves strong enough to remain standing and get a disposal away. Many will allude to the youngster’s multi-sport background when noticing his agility in congestion, and that kind of poise amid contested chaos is invaluable in the high-pace, high-pressure modern game.

A knock on many inside midfielders is their tendency to bomb away from congestion, rather than break free from it with speed or athleticism. While Davies is capable of weaving his way through some immediate traffic, he has been known to throw the ball to his boot at times when clearing a pack. He may face a learning curve in the early stages of his AFL career in that more mature players may be able to drag him down or give him even less time to dispose of the ball, therefore exacerbating any tendency to rush his disposal. Nonetheless, Davies is usually tidy via hand and can hit targets by foot when afforded a touch more space.

Another area Davies has been looking to refine is his ability to impact repeat contests. During preseason, staying on the move and working to the next contest as quickly as possible were a couple of focus points for improvement according to Davies. That willingness to spread will also help his impact on the outside, rounding off his game and adding to that already prominent contested work. The SUNS would undoubtedly have no issue in seeing Davies find even more of the ball around the ground as he builds his way up to go-to status at the centre bounces. As he works into the side, being able to find possessions in a greater range of situations will be important.

Given the draft concessions afforded to Gold Coast by the AFL, Davies will land at the SUNS as a pre-listed Academy pick. With his services acquired for effectively no cost at the draft table, Gold Coast is getting an absolute steal. In an open draft, Davies would have been considered a first round lock, with his value sitting at around the 10-15 mark. That is even despite a lack of football in 2020, such is the form he has shown as a junior.