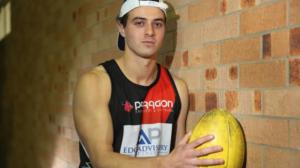 A Geelong VFL listed player, Cincotta did not manage a game in the state league, but that did not stop him catching the eye of AFL recruiters to earn a state combine invite running around with Newtown & Chilwell in the Geelong Football League (GFL). A medium-built inside midfielder or half-back, his go-to is the contested ball game, while also possessing terrific athleticism with a 2.97-second 20m sprint, and 91cm and 77cm running and standing vertical leaps. His competitive work around the ball translated to many defensive roles this year, impressing late Vic Country coach Danny Frawley for his shut-down job on ex-Bomber and Lion Josh Green to prove his credentials going both ways. Interest in him was also proven as he turned out twice in the annual Young Guns games, with his athleticism and ideal age making him an apt project player for clubs with the right mentors and time to develop. In the GFL, Cincotta averaged 18.9 disposals and 4.5 marks, and whilst he played in mostly offensive roles, he is flexible enough to play defensively-minded roles at the same time.