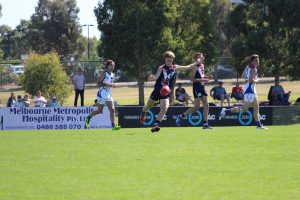 SUMMARY: Pacey outside midfielder Alastair Richards has enjoyed a consistent season across every level he played, impressing enough to be selected to represent Vic Metro. The St Kevins product caught the eye with his run from half-back or on a wing, carrying the ball up the ground to dart passes inside 50. His acceleration and spring are very good, proved by his 20m sprint time of three seconds and elite vertical leap score of 92cm off his left foot. Richards is most dangerous when delivering the ball forward, but can sometimes be inconsistent by foot. While he can often find some brilliant passes, Richards’ kicking efficiency of 56.2 per cent is below par, and his clanger rate of 14.3 per cent is a product of constantly looking for more high impact plays. They do look good when they come off though, and can be a serious weapon for him. The main area Richards will look to improve on is his contested ball winning, with just over a quarter of his possessions coming in contested situations, while also averaging under two clearances per TAC Cup game. His work rate somewhat makes up for it though, and he defends well for such an attack-minded player and could even look to transfer that into a midfield role.