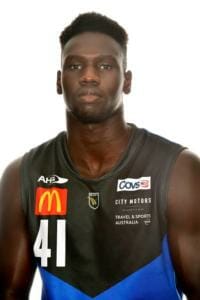 A mature-age ruck, Ajang Ajang came into his own this year playing through the ruck for East Perth after an inconsistent start to the year in terms of his accumulation. After Round 12, Ajang only dipped below 20 hitouts twice and 10 disposals once, showcasing his considerable upside and potential to be impactful over extended periods. A member of the Under-18 state squad in his top-age year (2015), Ajang has benefitted from a few solid seasons at state system at both Reserve and League level, coming up to the right age for raw talls to be given a shot. He is still needing to work on his conditioning with a low level of speed, agility and endurance, but his ruck work and upside was a feature of his game.