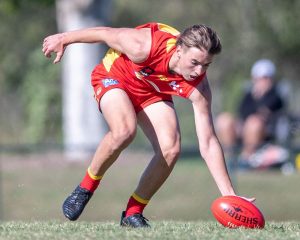 DRAFT ANALYSIS: “Fyfe is a tall winger who is arguably better suited at half-back where he can take the game on in transition” – Peter Williams

Aiden Fyfe is a tall midfielder who can also move off half-back and has some nice athletic traits to-boot. Possessing a penetrating left boot, Fyfe is a player who is good at transition running, and whilst he does not always look like a 2.898-second 20m sprinter – which he achieved at the Queensland Draft Combine testing – he still shows enough dash to worry opponents. For Fyfe, it is more about building consistency and developing a greater inside presence considering his body size of 190cm and 83kg is big enough to compete more regularly on-ball.

Fyfe is one of those players who has an inside midfielder’s body playing on the outside, but he also has the traditional outside traits that make it no surprise for clubs to utilise his skills. First off, Fyfe’s use by foot is usually pinpoint, with his left foot very impressive, and he can still use the right when needed. He has an elite vertical leap which saw him reach a whopping 95cm on the running vertical leap off his left, and then 84cm off his non-preferred right. It is easy to see that in a game as he is a strong marker who times his leaps well and can come across as a third man up, or have the strength to win one-on-ones against smaller opponents. The upside that Fyfe has is something that would attract clubs more so than what he does now even.

The Broadbeach runner was a late call-up to the Queensland Draft Combine, but finishing first in the vertical jump and 20m sprint showed he was far from making up the numbers. It did his draft chances no harm, though he still has areas from which to build on. His defensive pressure and courage in defence is good, but his consistency, particularly when it comes to four-quarter performance, can often be the question mark. In some games he can have huge quarters where he gets to the right positions and wins plenty of it, then others where he is barely sighted. As a player that teammates like getting the ball in the hands of and allowing him to run, he is someone that could definitely be more consistent on that front.

A strong Northern Academy series and great signs throughout the QAFL season indicated to clubs that he is someone willing to take risks and take the game on when required. As a predominantly outside player, Fyfe knows how to utilise his best assets, and he hits targets and covers ground from half-back to half-forward. If anything, his most potent position is at half-back, as he can read the ball better when behind it, and then take grass from there to go forward. Having had the odd quarter here or there forward, he has not had as much impact, nor on the wing where again he showed glimpses, but his most consistent play was at half-back. Overall, Fyfe has the traits to be a damaging player at the top level, it is just about ironing out the consistency and adding extra strings to his bow.

As a late call-up to the AFL Draft Combine, Fyfe is considered a rookie prospect. He is tied to the Gold Coast Academy and if picked, the Suns can take him prior to the draft. More likely considering list reductions, Fyfe would be one that has caught the eye of other clubs and some might be looking at him as a more physically readymade prospect to plonk at half-back once he has developed the areas of his game he needs to in order to compete at the next level.