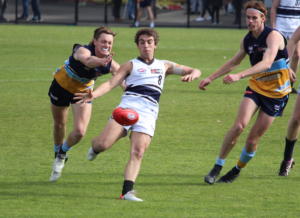 CONSISTENT as they come, Carafa is one of those reliable inside midfielders that you can throw into any onball brigade and know he will do a job. He does not have the athletic traits that other midfielders have, but is a workhorse around the stoppages with his contested numbers (51.6 per cent) and clearances (7.3) attesting to that. He is a fierce tackler who will always provide a contest. The Marcellin graduate also spent some time in the forward rotation while turning out for Vic Metro mid-year, and has previously shown his ability to find the ball up the other end as a half-back option. Carafa’s inside-oriented game did not restrict him in those secondary roles, with his presence brought to a raft of contests around the ground. But the engine room is where Carafa does his best work, and he can really take over at the stoppages with his positioning at the coalface and shrewd handballs out of traffic. In just 2019, Carafa has grown four centimetres and dropped five kilograms to be as fit and prepared as possible should he be given an opportunity at AFL level.