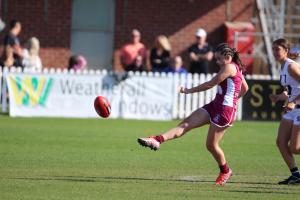 Abby Hewett is one of the more versatile players going around in the AFLW Draft crop, playing from forward, back or through the middle with consistent results.

Abby Hewett is a pocket rocket or someone who as been described as a “Fix It” player. She is capable of slotting into any role at any given time and having an impact, with the only question then coming as to what Hewett’s best position actually is, and the one she would play at the next level.

Standing at just 162cm, Hewett is not big, but she certainly has a lot to like about her game style. She is a clever player with ball-in-hand, able to use the ball well by hand or foot to distribute to her teammates on a consistent basis. Not normally a huge accumulator, Hewett certainly gave recruiters a taste of what she is capable of, picking up 16 disposals and eight clearances rolling through the midfield against Vic Country in the AFL Women’s Under 19 Championships.

With those kinds of numbers, Hewett’s impact is greatly increased, though she is just as classy around goals, such as when she kicked a couple of majors against Coorparoo in the Queensland Academy game. She has a nice burst, not afraid to win the contested ball, and can play on the outside as well.

When she can knuckle down a position where she can get some more continuity, as well as find more of the ball on a consistent basis, then her game can only improve from there. What she offers is a high-impact-per-possession style, able to keep within her limitations of using the ball with pinpoint sharp passes, whilst also able to extract from the clearances.

Going forward, Hewett has plenty of upside, and whilst she is shorter than a lot of the inside midfielders in the AFLW Draft crop, she has a lot of potential to slot into another role across the field, making her a unique talent with a point of difference for clubs.

“Unfortunately due to various lockdowns and COVID-19 scares, Queensland players have not been able to play as much representative football against the states as they would have liked, but one draft-eligible player who has impressed in the recent weeks has been Wilston Grange’s Hewett. The small, tough midfielder was fierce against Vic Country, clearly one of the standouts and racking up eight clearances, eight tackles and 16 disposals to be the premier clearance player on the day. What stands out with Hewett is her versatility, given that in the Queensland side’s win over Coorparoo, she played predominantly forward and showed great goal sense and footy nous to kick a couple of goals and then work hard up the ground at different times.” – Peter Williams via “2021 AFLW Draft eligible surprise packets”

“A hard at it and uncompromising midfielder, Hewett’s relentless attack and hunt of the ball, and ball carrier, caused some turnovers that had the potential to be really damaging had it not been for the work of the Country defense. Whilst not a massive clearance winner herself, she negates her opponents impact by getting the front position, allowing her to pounce on any opponent that may win the ball. She also displayed some good bursts of speed, running down a couple of opponents in open play, and occasionally backing that speed to go on runs herself. ” – Declan Reeve via “Top Performers – AFLW U19 Championships: Vic Country vs. Queensland”

“A nice little pocket rocket who slotted two goals on the day, with the first being a clever snap in the pocket midway through the second term, and another one from a clean kick on the run early in the fourth quarter. She worked hard up the ground to help run the ball out of defence later in the fourth quarter, and positioned herself well when the opposition was in possession.” – Peter Williams via “Top Performers: Queensland Under 19s vs. Coorparoo”