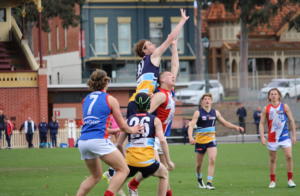 A long-term prospect who has been able to find his fair share of the ball, the lightly built 200cm Gundry has been a consistent performer in the ruck. He has spent time forward to kick the odd goal here and there, but his ground coverage is admirable for a ruck. Like most big men however, he is a handball-first player and that helps him because he is quite clean with ball-in-hand with 80 per cent efficiency in the area. Had 22 disposals in the Wildcard Round loss to the Knights, so can rack up the ball despite what his 12.6 disposal average might suggest. Gundry also wins a lot of his touches in contested situations, and with his mobility and ruck work key features of his game, along with an impressive 3.01-second 20m sprint, the Pioneers’ ruckman has a few more aspects to his game than just your traditional ruck.

DRAFT CENTRAL’S INTERVIEW WITH AARON GUNDRY AT THE 2019 ROOKIE ME DRAFT COMBINE: