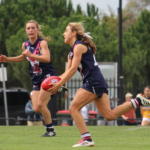 THE Sandringham Dragons have emerged victorious against the Gippsland Power by a thumping 52-point margin after a dominant first half display. Despite travelling to Morwell for the encounter, the Dragons looked right at home from the opening bounce and kept the Power scoreless for the entire first half.

The stoppage work of the Dragons was second-to-none as the visitors managed to get more numbers around the ball and attack with speed. The likes of Winnie Laing and Abbi Moloney proved to be potent goal threats in the early stages, with the latter finishing with five on the day. While the Power struggled to clear their defensive 50 at the best of times, any threat eventually making it toward Sandringham’s defence was dealt with by the poised Pia Staltari in the first term. However, it was the forward line pressure and midfield of the Dragons which was the highlight of the quarter. Bridie Hipwell was a key contributor for the visitors, with nimble footwork and penetrating use of the ball making her a threat.

In comparison, Gippsland lacked the same structure and at times were overwhelmed by Sandringham’s running power. A boundary thrown-in at the eight-minute mark of the term was emblematic of the quarter for the Power, as miscommunication allowed the Dragons three unmarked players surrounding the stoppage in the centre of the wing. Luckily, the dogmatic pressure of Gippsland’s Megan Fitzsimon saved the Power from another penetrating Dragons attack on this occasion. Fitzsimon continued this fighting spirit throughout the contest and finished with 23 touches and two goals in a valiant display in midfield. In combination with the dominant ruckwork of Matilda Van Berkel, Fitzsimon managed to provide the Power with almost their only forward movement of the half, with two impressive centre clearances early in the second term.

Yet these were easily repelled, as the Power were unable to lay a finger on the rebounding potency Sandringham again in the second stanza. At times it looked like circle work for the visitors as their midfield dominance was put on full display. Sandringham finished the term dominating in almost every statistic, including holding a 25 to six advantage in marks over the Power, outlining the control and time given to the Dragons midfield. Alice Burke started to impose herself on the contest during the quarter, with her damaging kicking being put to good use as she finished the match with three inside 50’s and four rebound 50’s along with 23 touches and 10 tackles. Eliza McNamara kicked both of her two majors in this quarter as she proved to be a handful for the Gippsland backline. Moloney was also the grateful recipient of some easy goals thanks to the work of Hipwell and Laing. The former impressively burst forward from the centre in early stages of the term and unleashed a damaging kick inside 50 into the waiting arms of Moloney. Laing’s highlights were more based around terrific tackling pressure up forward, creating chances for her teammates. At the main break, the Dragons held a crushing 53-point advantage.

In the second half, the Power were more competitive and managed to win the third quarter as the likes of Grace McRae and Sunday Brisbane stepped up to help the fighting efforts of Van Berkel and Fitzsimon. Fitzsimon received reward for her effort as she booted two goals in the half, while Van Berkel dominated the hitouts to give Gippsland a 35 to 12 advantage by the end of the match.

Despite being beaten in the third on the scoreboard by seven points, the Dragons still found some bright spots. Daisy Walker had 15 of her 22 touches for the match in the quarter and Sofia Hurley won some contested ball in midfield. In the fourth, Sandringham again showed their class to finish a more limited number of chances. Moloney capped off an excellent performance with her fifth major on the back of a strong mark up forward. Burke and Laing again spent much of the term proving themselves to be a class above, with Burke controlling stoppages with poise and Laing causing havoc up forward with pace and tenacity.

As the final siren sounded in Morwell, the Dragons had recorded 82 more disposals than the Power and controlled the tempo for most of the affair. Moloney’s five goals and 90 fantasy points make her appear as a likely contender for best-on-ground for the Dragons, yet many of her majors were relatively straightforward finishes. Burke’s game-high 23 touches puts her in contention, however, when the game was there to be won in the first term, Laing proved to be key in breaking the game open for the victorious Dragons, while Sarah Hartwig was busy once again across the ground.. Despite a crushing first half, a competitive second half will give Gippsland hope for the rest of the season.