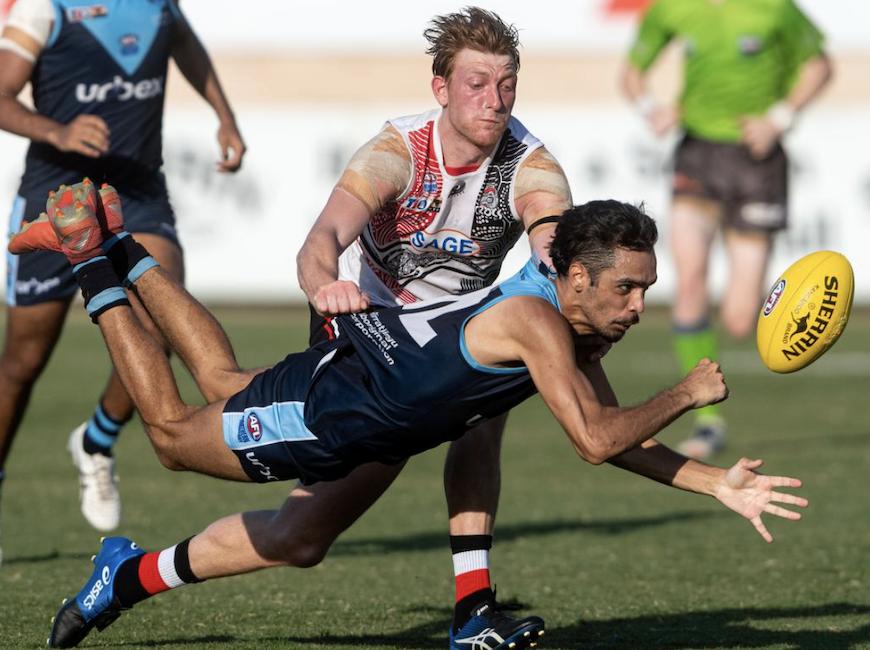 ROUND 2 of the Northern Territory Football League (NTFL) Men’s Premier League season saw its first draw between Darwin Buffaloes and Southern Districts, as reigning premiers Nightcliff bounced back, Palmerston Magpies picked up their first win, and St Mary’s was the only side on two victories after two rounds.

A mind-blowing seven goals to two second quarter set up St Mary’s to go it alone at the top of the 2021/22 NTFL Men’s Premier League table after two rounds, running away with an eight-goal win over Wanderers. Even at quarter time, the Saints booted 7.2 (44) from 14 inside 50s, and dominating the outside with run and carry picking up 21 extra uncontested possessions. Wanderers managed to stem the bleeding somewhat after that, kicking two goals to four, but could not get back into the contest, having 18 more rebound 50s, but being outplayed in disposals (plus-45 to St Mary’s), contested (plus-15) and uncontested possessions (plus-30), as well as handball receives (plus-12), ground ball gets (plus-15), clearances (plus-nine) and inside 50s (plus-22). In the end, the title contenders were just too good, picking up the 13.14 (92) to 6.8 (44) victory.

St Mary’s skipper Nathaniel Paredes backed up his Round 1 performance with another outstanding effort, slotting three goals from 29 touches, six marks, four clearances and four inside 50s. He teamed up well with Nicholas Yarran (22 disposals, three marks, 11 groundball gets, five inside 50s, one goal and three score assists), Lucas Jellyman-Tuner (22 disposals, four marks, six inside 50s and four rebound 50s) and Lachlan Taylor (20 disposals, six marks, five inside 50s and three rebound 50s) to win plenty of the ball. Nigel Lockyer Jnr booted a game-high four goals from eight touches, as Tyson Woods and Jackson Calder also slotted a couple of majors each for the Saints. Daniel Clee was the top ball-winner for the Wanderers, collecting 20 disposals, six marks, three inside 50s and kicking a goal, whilst Warwick Williams was a shining light in defence with 16 touches and 11 rebounds. Williams teamed up well with Mitchel Taylor (14 disposals, four marks and six rebound 50s), while up the other end, John Tipiloura booted two foals from eight touches as his side’s only multiple goalkicker.

Palmerston Magpies bounced back from their disappointing loss against Waratah last week to run out 15-point winners over reigning wooden spooners Tiwi Bombers. The Magpies peppered the goals for most of the match, and only booted the 13 goals from 31 scoring shots, but controlled play to dominate most of the key areas. The Bombers looked good in the first half, booting four goals to two and then five goals to three in the first two quarters, to lead by 18 points at half-time. That changed in the second half, with the Magpies piling on eight goals to three and running away 13.18 (96) to 12.9 (81) winners. The Magpies had plus-88 disposals, including 78 more uncontested possessions, 28 more marks, 19 more forward 50 marks, 57 more handball receives and eight more inside 50s. They did as they liked with their run-and-gun game and were able to pinpoint players across the field, lifting their kicking efficiency in the second half to 75 per cent – up from 67.5 per cent – as the Bombers efficiency dropped to just 56 per cent by foot in the last term.

Desmond Stafford slotted a massive six goals from 16 disposals and six marks for the Magpies, as Rudy Riddoch and Ryan Warfe also kicked two majors. Riddoch picked up a match-high 28 disposals, 13 marks and nine inside 50s, whilst also booting three behinds and having three scoring assists to make eight score involvements. Eric Guthrie (23 disposals, four marks, 10 groundball gets, seven clearances and five inside 50s), Christopher Williams (16 disposals, nine marks, five inside 50s and one goal) and Andrew Green (14 disposals, three marks, five one percenters and five rebounds) were also impressive in the match. With a defence under siege, Nicholas Hooker grabbed a match-high 11 rebounds for the Bombers, to go with his 22 disposals, two marks, two clearances, five tackles and two inside 50s. Up the other end, it was a two-man show as Kim Kantilla and Anthony Munkara slotted five goals apiece, while Patrick Heenan (11 disposals, three marks and four rebound 50s) and Shane Austral (nine disposals, four marks and five rebound 50s) also helped out in defence.

Reigning premiers Nightcliff showed it will be a force to be reckoned with yet, despite its Round 1 loss, knocking off Waratah by 35 points. The Tigers trailed by a point at quarter time, but booted four goals to one in the second term to double the Tahs’ score. Waratah hit back to cut the deficit to just two straight kicks heading into the final term, before a five goals to one onslaught in the last quarter resulted in Nightcliff securing the 12.12 (84) to 7.7 (49) victory. The Tigers dominated disposal, winning 47 more touches, of which 34 came in those second and third terms. They had 32 more contested, and 18 more uncontested possessions, as well as 31 more groundball gets and 19 more handball receives. The won the last quarter clearances by 10, with 14-4, 11-5 inside 50s and then a score of 4.5 to 1.0 to run out the game the far stronger side.

The NTFL’s first draw of the 2021/22 season has come early in the standalone Sunday clash between Darwin Buffaloes and Southern Districts. The Buffs seemed to have everything under control for the most part, racing out to an early lead and holding a 22-point advantage at the main break. They still led by 18 points heading into the final term and got out to a 30-point lead, before the Crocs booted the last five goals of the game to draw level and share the points in the clash, 13.6 (84) to 12.12 (84). Darwin statistically deserved to win, not only because they had five more scoring shots, but also 21 more disposals (including 22 more uncontested possessions), 18 more marks (10 more contested) 12 more hitouts and a massive 21 more clearances. In the first term, Darwin had 14 clearances to two such was their dominance, and then still 26-17 after the first break.