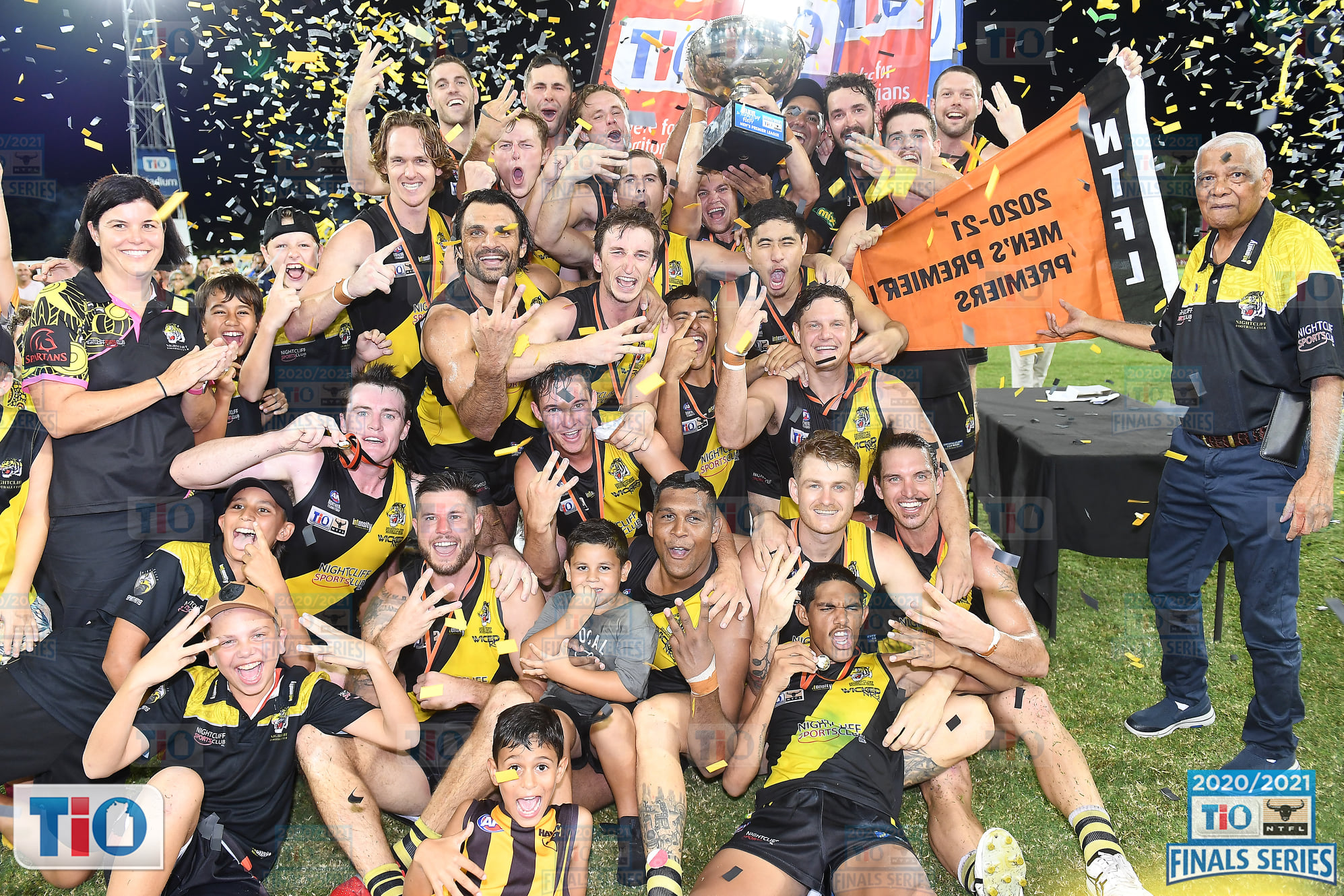 NIGHTCLIFF enters the 2021/22 Northern Territory Football League (NTFL) Men’s Premier League season as favourites, coming off back-to-back titles with eyes on a three-peat. The sleeping giant that was St Mary’s stormed up the ladder in the 2020/21 season to come within seven points over victory back in March, but the Tigers got up 16.14 (110) to 16.7 (103). The pair renew hostilities on Saturday night, to conclude the double-header at TIO Stadium that day, and the final match of the round.

The grand final rematch kicks off at 6:30pm local time, with the Tigers and Saints doing battle following the clash between Wanders and Southern Districts. The third placed Wanderers had a great season last year, finishing two wins off the pace of St Mary’s, whilst the Crocs were well back in sixth, though clear of the bottom two strugglers. After not getting a win on the board in season 2020/21, Tiwi Bombers will be hoping to start strong with a clash against Darwin Buffaloes at Gardens Oval earlier that day, following on from the Friday night clash between Waratah and Palmerston Magpies at the same venue.

Whilst official team lists are scarce, and fly-ins regular throughout the season, clubs have been working diligently behind the scenes to get the best possible start to the new season, and we will take a look at some of the top performers from last year. St Mary’s announced a new captain in ex-Gippsland Power talent and ball-winning midfielder Nathaniel Paredes taking over from Raphael Clarke and Shannon Rioli, whilst Jackson Calder and Kieren Parnell will take over as vice-captains. Paredes finished second overall in the disposal count for the regular season, averaging 24.2 disposals per game, with teammate Dylan Landt (23.5 disposals) also a natural ball-winner. Paredes also averaged the most clearances of any player with 5.5 per game. Calder slotted 29.19 for St Mary’s, with Jack Landt (29.25) and young gun Beau Tedcastle (25.20) all sharing the goals around, and ex-AFL talent Jackson Paine dominated with 21.12 in just six games.

They will need that inspiration if they are to topple Nightcliff, who were led by Nichols Medal winner Dominic Brew, and Brodie Filo through midfield, ranking first and third in total clearances for the season. Kyle Emery also proved huge up forward, slotting 56.32 for the season, whilst Cameron Ilett (32.16) and Trent Melville (27.17) also had strong years in the regular season. The Tigers were lead superbly after a massive season from Filo (22.3 disposals, 2.7 marks, 5.2 clearances and 6.3 inside 50s), as Brew (18.4 disposals, 7.3 tackles, 5.4 clearances and 3.7 inside 50s) and Ilett (16.9 disposals, 5.5 marks, 2.5 tackles and 3.2 inside 50s) were also lively up the ground.

Wanderers’ Brett Eddy won the goalkicking by 12 goals, slotting 68.30 in 17 games last season, averaging 4.8 marks in the process. No one found more of the ball than Eddy’s teammate Dane McFarlane either, with the Wanderers midfielder racking up 24.1 disposals, 5.3 marks, 3.4 clearances and 6.1 inside 50s last year. The defensive setup of the Wanderers was enormous with Brodie Newman also having a sensational debut season in the NTFL with 4.3 rebound 50s to go with 18.1 disposals and a whopping 7.1 marks. Then to add in Braedon McLean and Warwick Williams who averaged 6.8 and 6.3 rebound 50s per game to accompany more than 19 touches per match, they were strong in that area.

For Southern Districts, Luke Kiel averaged the 208. disposals, 5.2 marks, 3.2 clearances and 4.3 inside 50s, whilst James Tsitas unsurprisingly brought his VFL and SANFL experience to the NTFL for the Crocs, with an impressive 26.5 disposals, 5.2 marks, 3.1 tackles, 3.5 clearances, 3.5 inside 50s and almost a goal a game. He only managed the two games, but ex-AFL talent Michael Barlow was dominant with his 38 disposals, 8.5 marks and 4.5 clearances, won of many Crocs players to play five or less games. Dean Staunton and Michael Bowden were among the more consistent performers throughout the course of the season.

For Waratah Abe Ankers has long been a star of the NTFL and his 2020/21 season was no different, averaging 25.2 disposals across 10 matches. He and Robert Turnbull (22.4 disposals) were the biggest ball-winners whilst William and Dylan Collis, as well as Callum Searle and Brodie Carroll, were among the Warriors top players. Darwin also had an even contribution of players with Ryan Pendlebury, Lachlan McKenzie and Jarrod Stokes among their best talents once again, whilst Max Kennedy came in for 10 games and averaged 21.8 disposals, 4.7 marks and 4.7 inside 50s.

The two bottom teams had the two highest averaging rucks, with Palmerston star Matthew Dennis again dominating his peers on his way to 25.8 hitouts to go with 20.5 disposals, 5.9 marks, 3.9 clearances and 4.4 inside 50s. Jack Monigatti only played the 13 games, but averaged 23.4 hitouts per match, still finishing second for total hitouts (304) despite the less matches. Mason Dewit was a dominant defender for the Bombers, averaging 5.0 rebound 50s to go with 18.3 disposals and 4.0 marks, while youngster Tyrell Lui averaged the 16.5 disposals, 4.2 marks and 3.8 rebound 50s for the Magpies, and Ryan Warfe took out the Rising Star award.