THE Final Siren Podcast team returned this week for another pocket podcast edition, this time assessing the key position players available in this year’s draft. Chief Editor Peter Williams again took over the host chair to grill Draft Editor Michael Alvaro on some of the prime talls options, and why some are poised to feature at the pointy end. While the 2021 crop has been labelled a midfielder’s draft, there is again a strong core of tall options likely to feature within the first 15 picks; ranging from those who can play on every line, to specialist defenders and forwards. In the latest explainer, we highlight each player in said group, and run you through some of the key position depth attracting interest down the order. Podcast link: Click here!

Sam Darcy – A unanimous candidate for the title of being this year’s best tall prospect, Darcy is likely to be snapped up within the first three picks. Unfortunately for 17 other clubs, the versatile 204cm talent is tied to the Western Bulldogs through father-son eligibility and will inevitably see his bid matched incredibly quickly. Having initially caught the eye as an intercept marking defender who pinch-hit in the ruck, Darcy truly cemented his top status with a move forward while suiting up for Scotch College in the APS competition. He backed it up for Vic Metro and looms as another promising tall option for the Bulldogs to develop with terrific range, skill, and athleticism.

Josh Gibcus – The defender of this group, Gibcus’ strengths come aerially with his eye-catching intercept marking ability. The Greater Western Victoria talent boasts an elite vertical leap and uses that trait on-field to rise above the rest, clunking clean marks or chiming in with well timed spoils. He is steadily developing his ground level game and has shown signs of being a sound distributor by foot, with his overall rate of improvement this year a great sign of things to come. With a few clubs likely in for a key defender to develop, Gibcus seems destined to end up a top 10 selection.

Mac Andrew – The type of player you think of in the conversation of tall talents with upside, Andrew put in some seriously impressive performances this year to rocket into first round calculations. While he is tied to Melbourne as a Next Generation Academy (NGA) product, the 200cm ruck is almost certain to find another home within the first 20 picks. He remains quite light-on at 70kg and is raw overall, but Andrew boasts serious athleticism and is almost unlimited in terms of versatility. He leaps for high marks and has showcased an aptitude at either end of the ground, adding to his obvious ruck craft.

Jye Amiss – He may have been held goalless in his final two WAFL Colts outings, but that only came after a remarkable run of booting multiple goals in every other game this year. Amiss’ goalkicking record of 51.15 was something to marvel at across his 15 Colts games, showcasing incredible accuracy and reliability inside 50. While apt in the air and on the lead at 195cm, the West Australian has developed his ground level game to add more dynamic avenues to goal, while also gradually advancing further afield as a marking target. He may tempt clubs just within the top 10 and is one of the premier key forwards available. 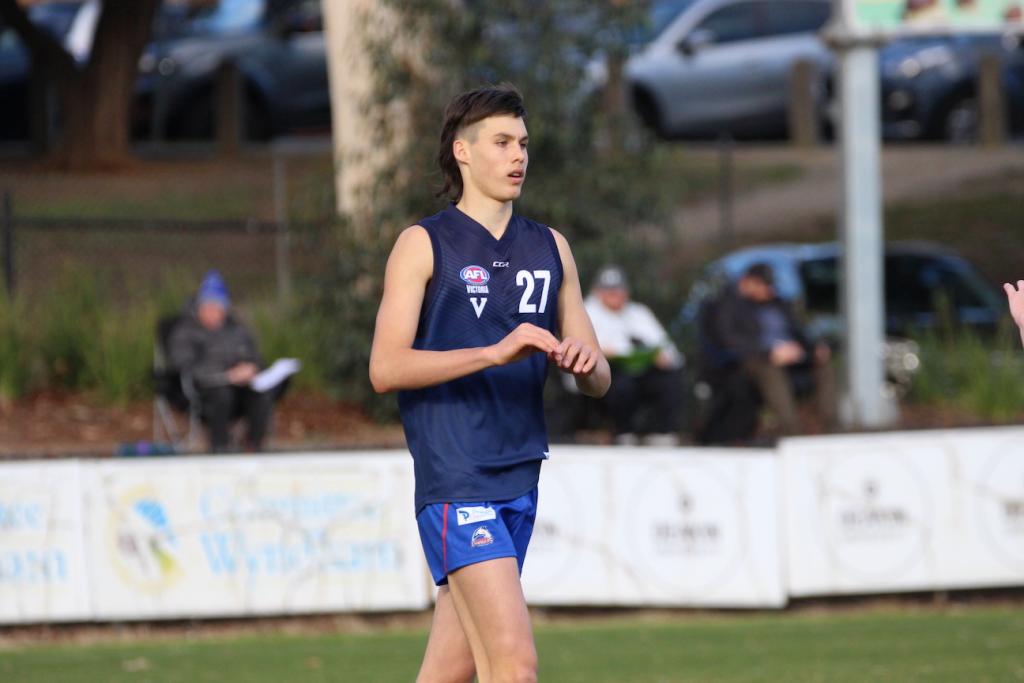 Sam Darcy is the leading tall in this year’s crop

While Amiss established himself as the forward spearhead, Western Australia has no shortage of key position options to call upon. It should show at the draft too, with many in contention to find a home at the elite level. East Fremantle forward-ruck Jack Williams kicked 37 goals in 14 Colts games to become an early second round contender, with Jacob Van Rooyen (30 goals in eight games) another highly touted forward who has also transferred his physical marking attributes to defence. Swan Districts’ Rhett Bazzo is another potential swingman, but looks most comfortable taking intercept marks in defence and was terrific in the last Under 19 representative bout. Along with the aforementioned names, Fremantle NGA talent Eric Benning has risen steeply of late to earn a national combine invite, with his athleticism and upside as a ruck-forward hard to deny. Speaking of, Josh Cripps – the brother of Carlton’s Patrick – has enjoyed an outstanding end to the year, while the likes of Subiaco’s Jake South and Peel Thunder’s Luke Polson have had solid seasons.

The latter pair have both climbed the WAFL grades in 2021 and were among 30 players added to the draft combine list. The top ruck option While the likes of Darcy, Andrew and Williams can all ruck, they boast the kind of versatility that will likely see them spend plenty of time up forward or down back. Should a club purely be in for a tall whose primary craft lies in the ruck role, Toby Conway is their man. The 204cm Geelong Falcons product was the AFL Academy and Vic Country first ruck, gaining a good amount of confidence in the role and steadily adding different elements to it. He developed his follow-up game and on the back of a solid running capacity, has upped his influence around the ground with contested marking. He looms as the prime pure ruckman, around the 20-30 mark. 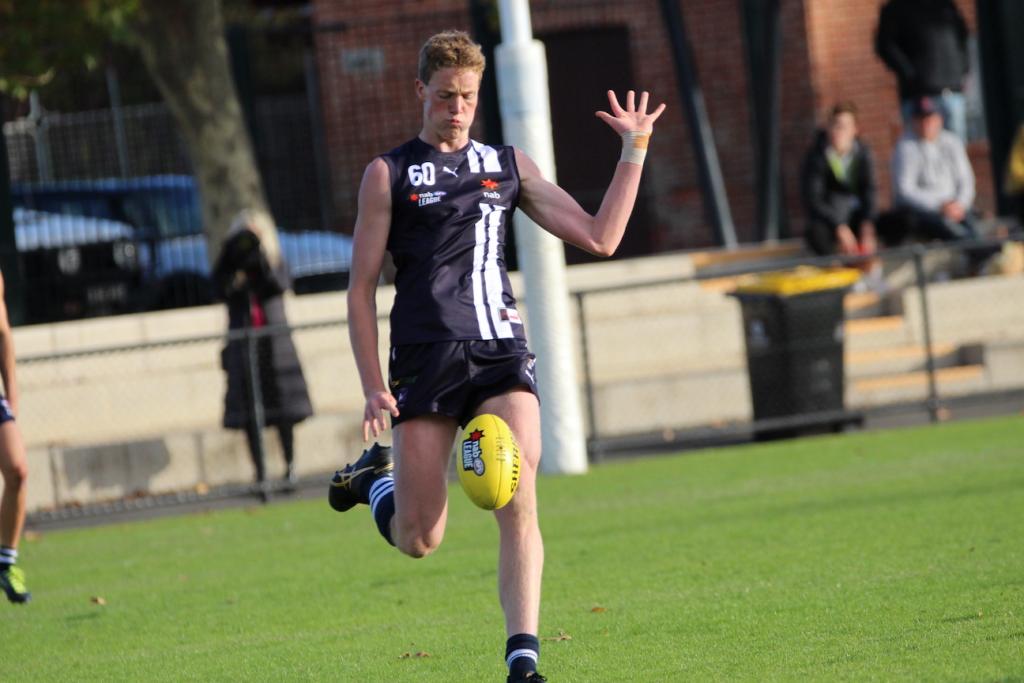 Toby Conway gets a kick away for Geelong Falcons

Three names would have stood out to many among the 120 draft combine invitees, as they are older than the typical top age (19). Arguably the leader of the lot is Leek Alleer, an ultra-athletic key defender out of Central District. Having cut his teeth on the wing and up forward in last year’s Under 18s competition, Alleer cracked the Bulldogs’ League side and has impressed with his aerial ability. His upside has him looming around the second round mark. Charlie Dean (Williamstown, VFL) and Noah Pegoraro (West Perth, WAFL) are others in the mix. Both have previously attended state combines and remain in contention having stood up at state league level. Dean, who played at both ends for Sandringham Dragons, seems to have settled down back and is a reliably hard worker. Pegoraro offers good versatility as a defender, and both players may now be ready to crack the bigtime. 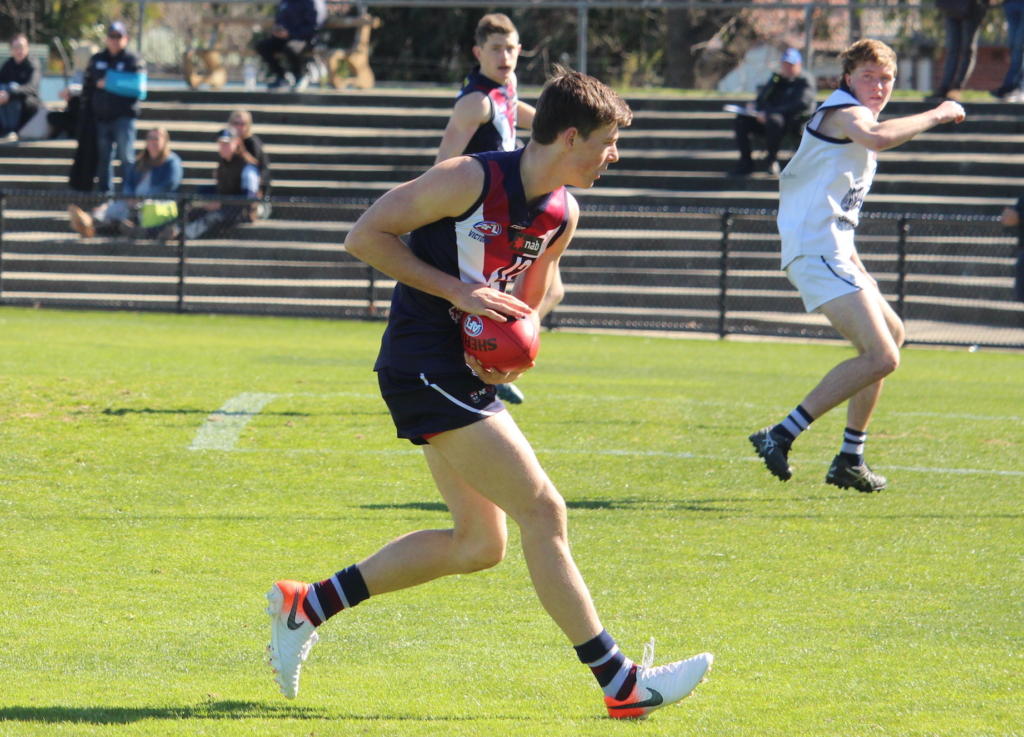 Charlie Dean in action for Sandringham Dragons in 2019