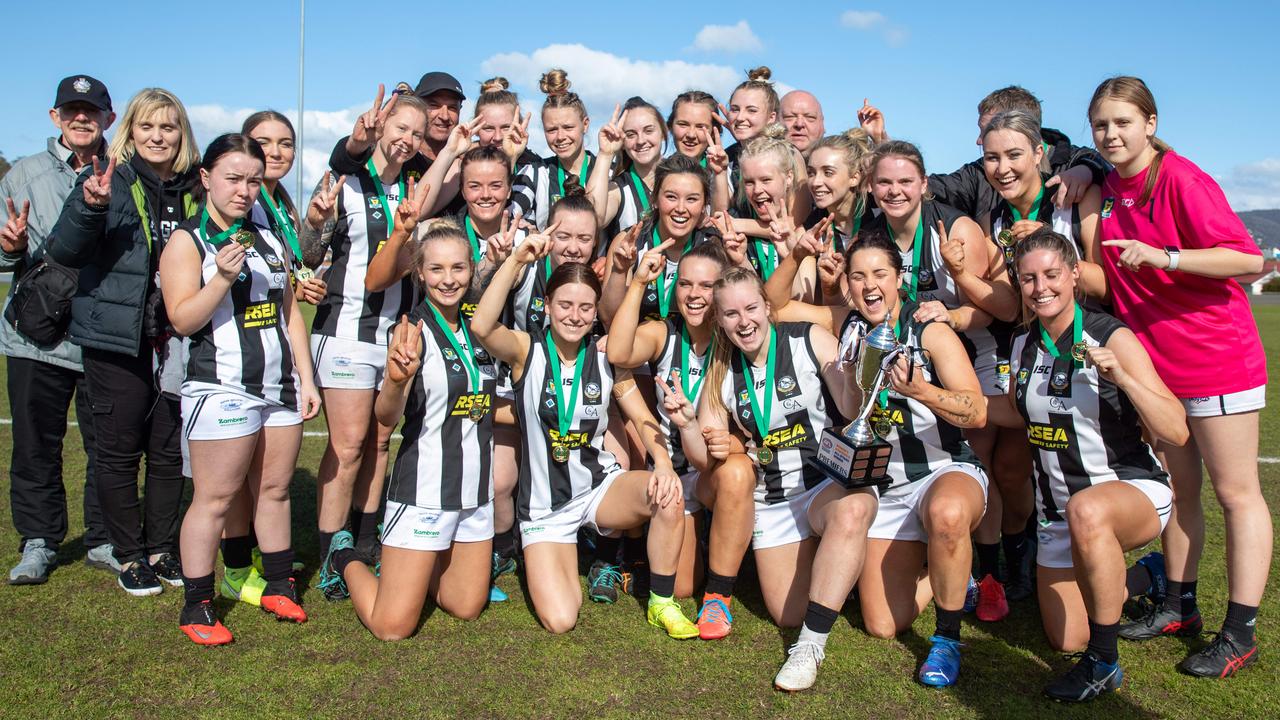 THE Glenorchy Magpies have claimed the inaugural 2021 Tasmanian Women’s Statewide premiership, defeating the Ulverstone Robins to the Tune of 13 points at North Hobart Oval. In what proved to be a low scoring affair – which was not helped by the strong wind blowing across the ground – Glenorchy maintained its undefeated record to claim the ultimate prize in Tasmanian women’s football. It was the first year the league introduced the format of the best side from each half of the state facing off in an all-star contest. The two sides competed in separate leagues, with the Robins claiming the North West Football League (NWFL) Women’s flag and the Magpies awarded the Southern Football League Women’s (SFLW) premiers. Both sides entered this match without a loss next to their name, and Glenorchy were able to prove themselves as the state’s strongest side.

The first quarter saw a hotly contested battle, with neither side able to claim ascendancy early in the match. Glenorchy’s Jemma Webster was busy in the opening minutes, finding plenty of the ball across half-back and the wing. It took until the 13 minute mark for a team to finally hit the scoreboard, which shows how hard the two sides were fighting to gain possession and territory. The first goal came through Ulverstone’s Hannah Martin, who doubled back to the goal square after the ball sailed over her head and soccered the ball through. It was reward for effort with the Robins dominating the five minutes leading up to this. At quarter time, the goal remained the solitary score for the contest, with Ulverstone taking the lead into the first break.

Glenorchy answered in the opening minutes of the second term, using the wind to their advantage to boot through a major courtesy of Molly Mitchell‘s shot on the run. The Magpies began to slightly grab control of the game, launching a number of attack’s inside-50 in the next 10 minutes of play. A heavy collision saw Robin Candice Belbin a little worse for wear, but she displayed bravery to play on, which drew a round of applause from not only the crowd, but also the Glenorchy players in a show of sportsmanship. The Magpies shortly after slotted their second goal through Tiarna Ford, and the game looked to be heading one way. A couple of errant shots on goal before half time saw Glenorchy take a nine point lead into the main break.

It did not take long for Glenorchy to extend this lead in the third term, with a cracking goal from Brooke Barwick coming in the opening minute of the quarter. Barwick gathered the ball at the 50m arc, evaded an attempted tackle, and booted the ball to the goal square where it bounced through for the goal of the day. On the shadows of three-quarter time, Ulverstone were able to kick one against the flow to give themselves a sniff heading into the final term, trailing by just nine points.

Glenorchy were not going to let this one get away, and they opened the last quarter with a goal through Sarah Skinner, who laid an excellent tackle to draw a free kick in front of goal, which she converted. The scoring dried up for the remainder of the term, returning to the contested play that was seen in the first quarter. The Robins got one back in the form of Libby Haines, who snapped a clever goal from a contest, but it was all too late, as Glenorchy walked away with the victory.

Glenorchy midfielder Georgia Clark was judged best afield, thanks to an outstanding match through the midfield. Her stoppage work was fantastic, and she set up many of her sides scoring opportunities. Barwick and Webster were also great for all four quarters.

The Robins were well serviced by Haines and Belbin, and can still be proud of their effort to claim the NWFL premiership.