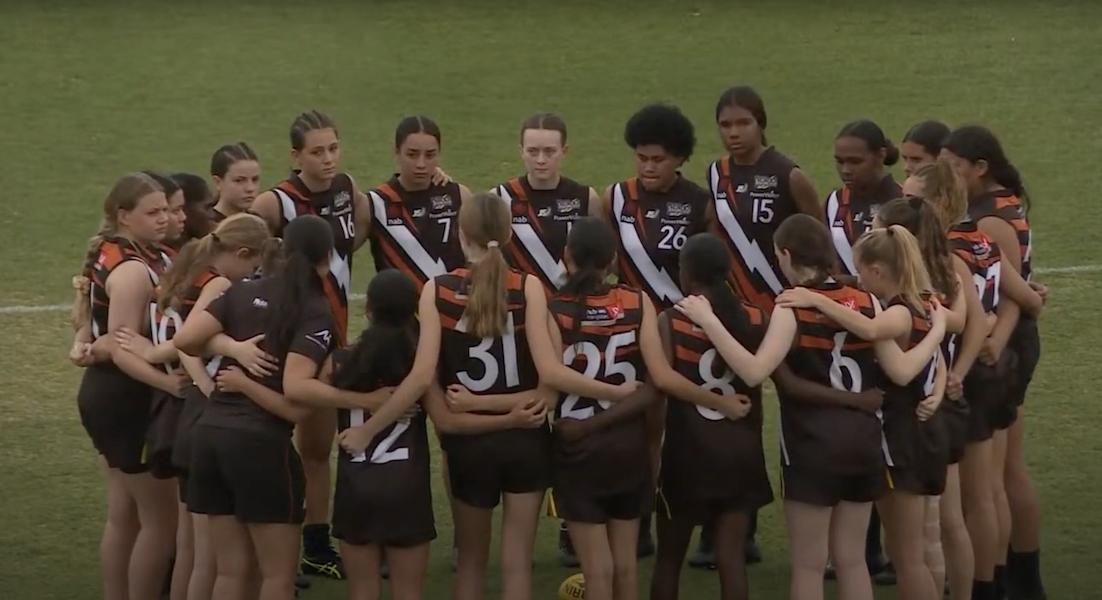 IN a grandstand finish fit for the representative football occasion, Team Baird took out the first game win over Team Ponter in the Northern Territory’s AFL Women’s Under 17 Championships clash. Whilst Baird won by a point – 7.7 (49) to 7.6 (48) – it was the impressive effort of 14-year-old Rania Shelford up forward for Ponter that caught the eye. Possessing some impressive athleticism, and equal measure of offensive and defensive traits, Shelford slotted three majors in the loss to try and drag her side over the line.

The 2007-born prospect kicked Ponter’s first goal of the game in response to one up the other end by Mikayla Baldwin, and then kicked back-to-back goals in the third term in different ways. Her second major came with a nice turn of speed one-on-one heading back to goal to slot it running in, and her third was from a run-down tackle inside forward 50 – in what was a third chasing effort after a handball chain from the opposition – to win a free kick and convert the set shot from 25m out.

While Shelford was certainly the most damaging up forward, talented Southern Districts prospect Grace Whittaker was arguably best on ground in a losing side, backing up her performance from a year before where she impressed with her athleticism and footy IQ. The 2005-born talent is only two days inside her year – as a December 30 birth – but looks the most readymade of any player in the game, with her move into the ruck in the second half a key component for Ponter.

It was neck-and-neck throughout the match, but Baird did a lot of the attacking in that first half, before the third term was dominated inside 50 by Ponter. Whittaker’s move into the ruck helped set up the goal-scoring prowess of Shelford, and the side peppered the goals, but kicked 2.3, and then Team Baird, through the likes of 2022 AFLW Draft-eligible Siniva Sa’anga who slotted two majors, kicked three goals from three scoring shots to open up a seven-point lead at the final break.

Not only did Whittaker’s move into the ruck prove crucial – and when she began to impact the game around the ground as well – but it helped somewhat nullify Parnell who to half-time was a standout performer and far too athletic in the ruck and clean at ground level around the stoppages. Like Whittaker, she is an 05-born talent and therefore a 2023 AFLW Draft hopeful. She spent most of the game in the ruck, against a multitude of opponents and impressed, then when Whittaker was moved back on the outside, she again took control.

It was fitting that Whittaker gave her side a chance of winning, kicking the only goal of the final term in the dying minutes to draw within a point, as Baird kicked just two behinds for the quarter. Ponter was constantly driving the ball forward and attacking, but ran out of time as the siren sounded with one point the difference between the sides. Another impressive performer on the goal front was Baird’s Kyanne Campbell (05-born) who slotted three goals – one in each of the first three quarters.

From the winners, Parnell was a standout most of the game and found plenty of it in the first half, with Campbell being the key goalkicker and future talent Emma Stark showing some impressive forward craft as an 06-born talent. Of the 2022 AFLW Draft eligible players, Erini Gikas and Sa’anga were both among the winners’ best. Ponter had the two clear standouts in Whittaker and Shelford, though the draft-eligible Hayley Maher showed some nice signs, and bottom-age talent Tsharni Graham was prominent adding to the impressive nature of the 2023 AFLW Draft class.

Whilst very raw as a whole cohort, the likes of Whittaker and Zerafa are two athletic talls who have a great foundation to build from and Campbell a forward threat, with Stark and Shelford among those to keep an eye on for even longer-term future years.