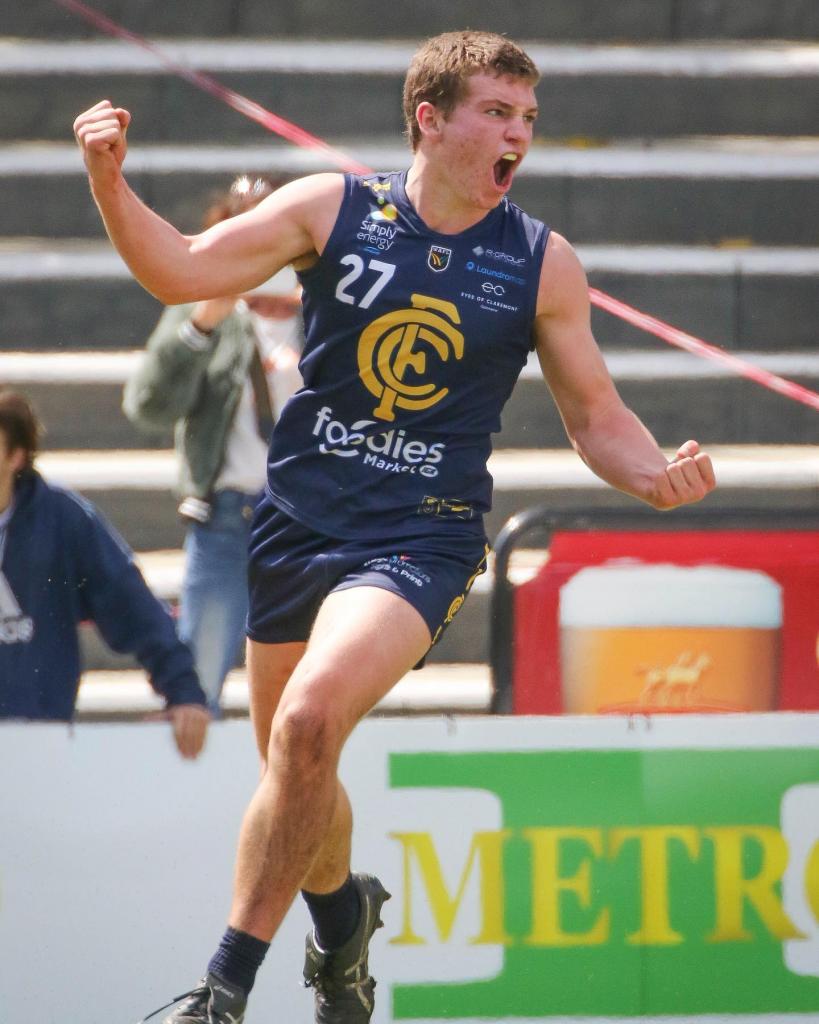 WEST AUSTRALIAN midfielder Angus Sheldrick has impressed across multiple levels throughout his 2021 campaign. Most of his appearances have come for Christ Church in the PSA, but Sheldrick has taken the step up to WAFL Colts and state representative level in his stride, consistently finishing amongst his sides’ highest accumulating players while providing high work-rate and pressure around the ground.

The 179cm inside midfielder put in an arguably best on ground display against East Perth in the recent start to the 2021 WAFL Colts finals series, winning plenty of ball for Claremont as the Tigers brought home a four-point victory.

Starting the game in the midfield, Sheldrick wouldn’t move from the role for the quarter as his constant work rate and pressure around the contest set the tone for Claremont around the ground. Sheldrick made an early impact with his tackling, causing a stoppage around the forward 50 before getting involved in the handball chain that Claremont would start from the clearance, where he managed to find teammates even when in traffic. His ability to find teammates wasn’t limited to his handballing either – he took the opportunities he had by foot to put the ball to the advantage of teammates inside 50. Unfortunately at times his teammates didn’t react quick enough and couldn’t take full advantage of it.

Claremont had difficulties with it conversion on goal, kicking five straight points to start the game before Sheldrick put the Tigers’ first goal through. With a stoppage inside 50, Sheldrick positioned well to get a backwards handball from his teammate, then tucking the ball under his arm and getting around a couple of opponents to snap it straight through.

Sheldrick’s positioning around the ground was arguably his biggest strength in the first quarter. Whether it was getting onto the end of some handball chains, holding up an opponent after they won the ball at a stoppage, or coming into a contest so he was at the front of a marking pack, he was largely unmatched in that regard throughout, so much so East Perth started giving him some extra attention around stoppages.

Whilst not accumulating as much of the ball in the second quarter, Sheldrick maintained his defensive and pressure work around the ground and in stoppages, keeping East Perth’s major ball winners honest and on their toes. He won a couple of clearances through sheer work-rate and ferocity at the contest, bumping opponents out of the way to get the ball and feed it off by hand to well-positioned teammates, typically looking to move the ball into the corridor.

Something that stood out more about Sheldrick’s game as the quarter went on was his defensive focus in all aspects of the game. In open play he’d work back hard to create a stoppage with his tackling or pressure, and around stoppages he’d often set up on the defensive side to stop opponents running straight through into their attacking 50.

Somewhat limited in how much he could impact due to getting a cut on his head that took some time to bandage up, Sheldrick still made the most of his opportunities in the third term and made sure his presence was felt. The theme of Sheldrick’s quarter was courage, putting himself into some uncomfortable situations and coming out on top. The most impressive example of this came late in the third, as the Royals looked to be getting a certain goal as they streamed forward, but Sheldrick put himself in front of a leading Jye Amiss, holding the mark as Amiss knocked a bit of wind out of him. Sheldrick got straight back to his feet and ran the ball out of defensive 50 before kicking into the middle.

Sheldrick continued to work defensively and apply pressure around the midfield, frustrating opposition players and copping heavy contact that should have seen him rewarded with some more free kicks.

Sheldrick played a big role in securing the victory for Claremont in the final term, winning a lot of ball and generally using it well by foot, looking to spread the play wide to teammates or kick it long to a pack for his tall forwards to crash. What was arguably most impressive about his last term in particular was how he started to present as a marking option around the ground, providing smart leads that weren’t overly dangerous but helped Claremont get a more open ground. Sheldrick also started getting more rewarded for his tackles, earning a couple of free kicks with his repeat efforts through the middle of the ground.

Sheldrick has made a name for himself as one of the premiere draft-eligible inside midfielders from WA and showed exactly why in the first final of the WAFL Colts season. Whilst Sheldrick doesn’t play a particularly flashy game, his work-rate and courage in his approach lifts his team with him and keeps his side in the contest regardless of the score. It’s obvious that opposition consider him a danger with the amount of attention and work that gets put in to him, in an attempt to negate his impact around stoppages.

As we approach the AFL Draft, don’t be surprised to hear more and more about Sheldrick with reliability and consistency during an interrupted season two big ticks alongside his name.