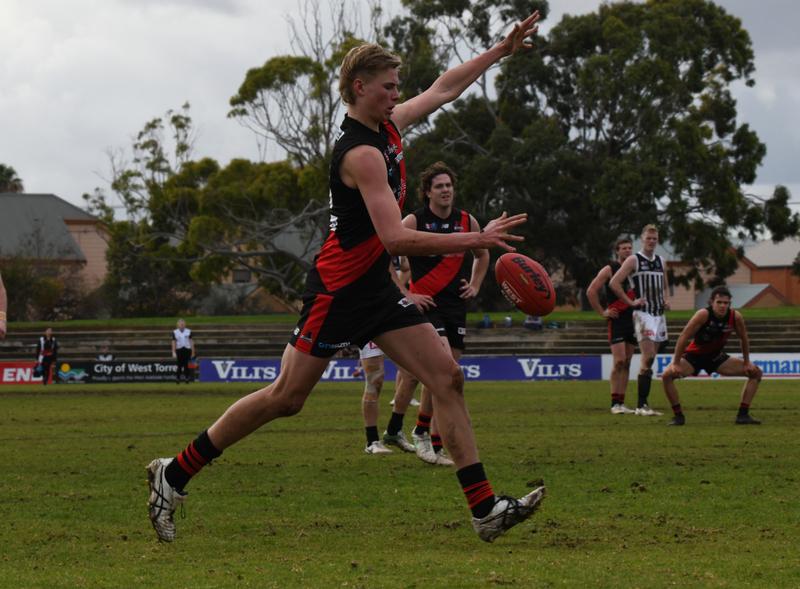 THE SENIOR SANFL grades roll into finals this weekend, with qualifying and elimination finals complementing a promising Under 18s preliminary matchup. There is a good scattering of junior talent looking to make an impact up the grades; from state Under 19 representatives, to AFL Draft Combine invitees, and bottom-agers on the rise.

With minor premier Glenelg getting the week off, Woodville-West Torrens (second) and Norwood (third) are the highest ranked sides in action during Sunday’s League fixtures. The Eagles, who defend their crown this finals series, have beaten the Redlegs twice in 2021 by a combined 83 points. Both sides should come in with a good deal of confidence though, having won in each of their last three outings.

State Under 19s representative Max Litster is in contention to keep his spot after debuting last week, named on the Eagles’ extended bench as skipper Luke Thompson and Daniel Menzel both return form injury. Small forward Henry Nelligan is a Norwood youngster to watch, along with rising defender Jack Heard. The Redlegs will also have their captain, Matthew Nunn, make a timely return.

North Adelaide and South Adelaide lock horns in the League elimination final, with both sides landing a game clear in the top five on the back of 10-win seasons. The two sides have met twice in 2021 for an even 1-1 ledger, though both are slightly out of form. The Panthers started hot but could only muster a 3-6 record in the back-end of the season, while the Roosters come in off two losses on the end of a six-game winning run.

All eyes will be on top draft pick contender Jason Horne-Francis after his magnificent performance last week, with the teenager primed to make a real impact on the big stage. Matthew Roberts has also been named on an extended interchange, as South brought in the likes of Matthew Broadbent. North has unfortunately lost a couple of players to injury, with former AFL-listed products Billy Hartung and Cameron Hewett sidelined.

A strong bunch of state Under 19 squad members are in line to hit the Reserves grade across both finals on Saturday, with Central Districts naming four for its elimination bout against West Adelaide. Speedy forwards Isaiah Dudley and Lachlan Grubb are in alongside tall midfielder Shay Linke and Luca Whitelum, who made a successful debut last week. Electric wingman Ronald Fejo Jnr also features for Westies after his combine inclusion.

In the qualifying final between Woodville-West Torrens and Sturt, state vice-captain Mani Liddy will look to continue his solid run of form. Defender Zac Becker will line up alongside him for the Double Blues, while Brayden Calvett and bottom-ager Adam D’Aloia are among both the two’s and Under 18s squads.

Speaking of the Under 18s, Woodville-West Torrens takes of West Adelaide for the chance to take on Glenelg in next week’s grand final. Both sides carry plenty of class across each line, fielding players across multiple age groups and a few each who will be in draft contention going forward.

Eagles skipper and recent combine addition Jordan Lukac lines up at full forward, looking to spearhead the attack with reliable goalkicker Lukas Cooke. The latter has been named at centre half-forward next to gun bottom-agers D’Aloia and Mattaes Phillipou, while Port Adelaide father-son candidate Jase Burgoyne starts out on the wing.

It’s land of the giants over at West Adelaide, with plenty of talls to choose from. Tom Scully and Oscar Steene take up the starting key forward posts, with Harry Barnett rotating from the ruck and Harry Lemmey another to choose from off the bench. 2005-born prospect Will Patton is one to watch up the other end, while bottom-agers Kobe Ryan and Tyson Coe compliment Cade Kennedy well in midfield.

Stay tuned to Draft Central over the next week, as we bring you Scouting Notes and Player Focus pieces on some of the weekend’s best performances, with the SANFL Under 18s Team of the Year also to be released mid-week.