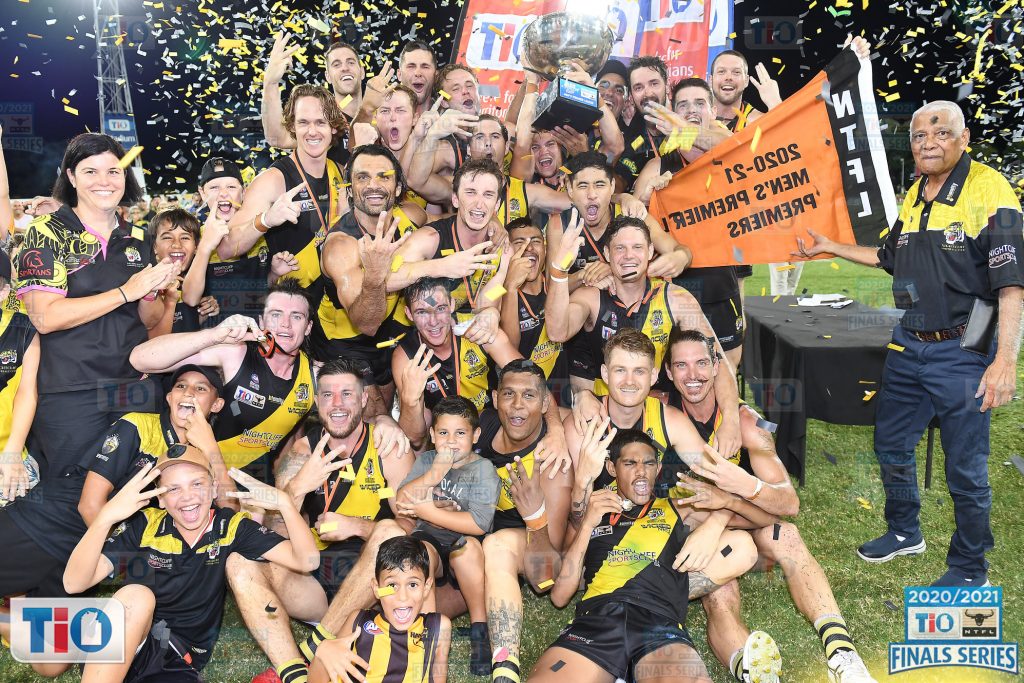 JUST 21 sleeps remain until the first bounce of the 2021/22 Northern Territory Football League (NTFL) Men’s Premier League, with a Friday night fixture kicking off on October 1. Waratah hosts Palmerston Magpies at Gardens Oval, before the remaining three games take place the next day. The NTFL Women’s Premier League also kicks off that weekend, with a triple header at TIO Stadium on Saturday October 2, before the Waratah-Palmerston clash at Gardens Oval on Sunday.

In 2021/22 the same eight sides will again contest the Men’s Premier League, with nine teams battling it out in the Women’s Premier League. Each round a women’s side will have the bye, with last year’s runners-up Darwin Buffettes having an extra week of preseason. Their first match will be all the way down on Sunday, October 10 taking on fellow finalists Southern Districts.

From a contenders perspective, Pint took home its inaugural Women’s Premier League premiership last season, and the Queen Ants will be keen to go back-to-back. Since the inaugural 2004/05 season, St Mary’s and Waratah have shared in 13 of the 17 flags, though Pint and Southern Districts have been the last two premiers. Nightcliff, Tracy Village and Wanderers are the only sides without a premiership title to their name in the women’s history.

In the men’s competition, four teams have collected the majority of flags, particularly dominated by St Mary’s (32) and Darwin Buffaloes (23), who have more than half a century worth of flags. St Mary’s record haul is made all the more impressive by the fact they entered the league after four of the current eight sides, in 1952. Every side in the league has won at least one title, with the newest team Tiwi Bombers – formed in 2007 – winning in 2011-12. The longest premiership drought belongs to Waratah who last won on the turn of the century in the 1999-2000 season.

Nightcliff is the team to beat though, winning the past three flags to take their tally to six, having not won one since 1964/65 prior to their 2018-21 three-peat. The reigning premiers will have the biggest challenge up first, taking on St Mary’s in a grand final rematch that promises to be massive at TIO Stadium. The Saturday night clash is the second in a double-header for the men’s competition, with Wanderers and Southern Districts kicking off that league from 4pm, and the second game at 6:30pm.

For the diehard fans, the triple header of the Women’s Premier League will start from 10am at TIO Stadium, meaning fans can watch from 10am until 9pm with five games taking place. Nightcliff hosts Tracey Village, Wanderers hosts St Mary’s and reigning premiers Pint locks horns with Southern Districts in what is anticipated to be a massive day of footballing action.

Round 1 is known as TIO Round, with Umpires Round (Round 3), Indigenous Round (Round 7), Road Safety Round (Round 8) and No More Round (Round 17) among the special initiative rounds. Both leagues will run for 18 rounds, with the final regular season of action taking place on Saturday, February 19. There will be a break over Christmas and New Year, with Round 12 competition concluding on Sunday, December 19, and Round 13 kicking off on Saturday, January 18.

Clubs will also have a break on Saturday, January 22 for NTFL representation weekend, whilst Waratah and Wanderers will battle it out on January 26 for their annual rivalry. With plenty of speculation around potential recruits to the league – including rumours of ex-Blue and Crow Eddie Betts taking part this year – expect the competition to be as big as ever.