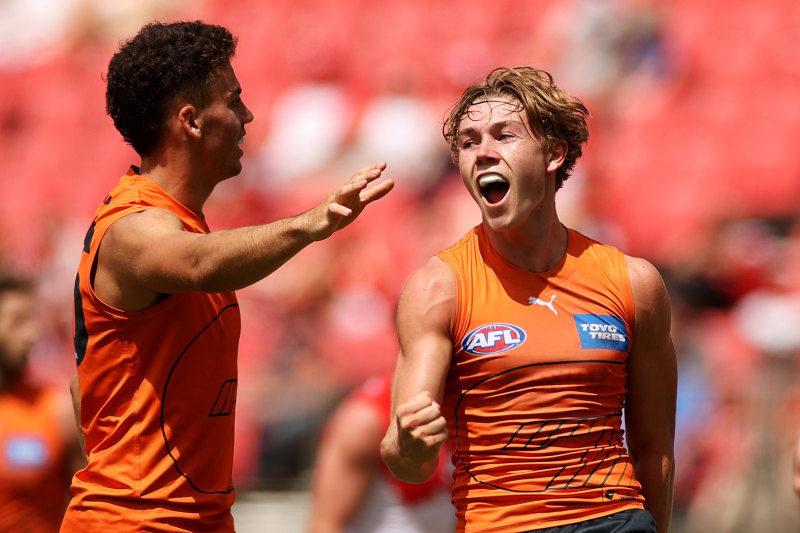 AHEAD of the 2021 AFL National Draft, we cast our eyes back 12 months ago to when the newest draftees had their names read out, and what they have accomplished since at the elite level. In the fifth piece of 2020 AFL Draft standouts (first chance at AFL level), we look at the 5th and 6th placed teams in GWS and Brisbane.

The GIANTS entered this draft following a disappointing season, with a goal of adding some high quality young talent to form the future of the club. Their first selection came in the form of Geelong Falcons midfielder Tanner Bruhn, who had showed at lower level his ability to read the play and win the contested ball. Bruhn made his debut in Round 1, finishing the contest with nine disposals, five contested possessions and three score involvements as his side fell to St Kilda by eight points. He would go on to play 13 out of a possible 25 games for the year. He racked up a career-high 14 disposals in the GIANTS’ win against Richmond, while his strongest all-around performance came in round 21 against Geelong, where Bruhn recorded 12 disposals, four marks, five tackles and a goal, proving to be a vital contributor in his side’s upset win over the Cats. The 19-year-old retained his spot through the GIANTS’ two finals and despite the semi-final loss, Bruhn looked lively when the ball entered his team’s forward 50. With plenty to build on, Bruhn can hold his head high after an impressive debut season.

The GIANTS’ next pick in the draft was used to select Conor Stone, a youngster who can play at either end of the field and had shown his decision-making and skill by foot. With the GIANTS losing rebounding defender Zac Williams to Carlton in the free agency period, the door opened for Stone to make his debut in Round 4, where he recorded 11 disposals, two marks, two tackles and two intercept possessions, playing off half-back as his side defeated Collingwood by five goals. He built on this performance with an impressive display the following week, gathering 13 touches (at 85 per cent efficiency), four marks, six contested possessions and five score involvements in the GIANTS’ two-point win over the Swans. He would finish off the season with five games played and some valuable experience under his belt.

The GIANTS’ three remaining draft picks would not feature in the 2021 season, but were able to develop in the Victorian Football League (VFL). Ryan Angwin, a classy left-footed defender/forward, averaged 15 disposals, while Jacob Wehr averaged an impressive 18 touches per game. Defender Cameron Fleeton was able to work on his defensive craft, playing on some of the VFL’s best forwards throughout the year.

The Lions had an excellent 2020 season, making the preliminary finals, but this caused them to enter the draft with a weaker hand than other clubs. The Lions’ first pick selected Blake Coleman, an electric small forward fresh off a QAFL premiership with Morningside. With his older brother Keidean finding himself in Brisbane’s best 22 as a defender throughout the season, the Lions had high hopes for the next Coleman. With Brisbane’s forward line stacked with the likes of Charlie Cameron and Lincoln McCarthy at AFL level, Coleman was forced to bide his time in the VFL, where he averaged 13 disposals and kicked six goals in 10 games.

The Lions then used their 43rd pick in the draft to select Harry Sharp, a running defender from the Greater Western Victoria (GWV) Rebels who had the ability to break into the Lions’ side almost immediately with his outstanding time trial numbers and professionalism. Sharp debuted in round one against the Swans, recording 11 disposals and laying three tackles in an eye-catching outing for the defender. Unfortunately, injuries prevented Sharp from continuity within the side, playing just two games for the senior side and four in the VFL. Sharp’s short stint was still able to impress fans with his gut-running, and the 19-year-old will be looking for a clean bill of health to help him break into the senior side in 2022.

The Lions’ final pick was used to take Henry Smith, a young ruckman from South Australia standing at a whopping 206cm. The club is hopeful he will take the mould of current ruckman Oscar McInerney, and while he did not feature at senior level, Smith averaged nine disposals a game in the VFL while booting 12 goals in eight matches.