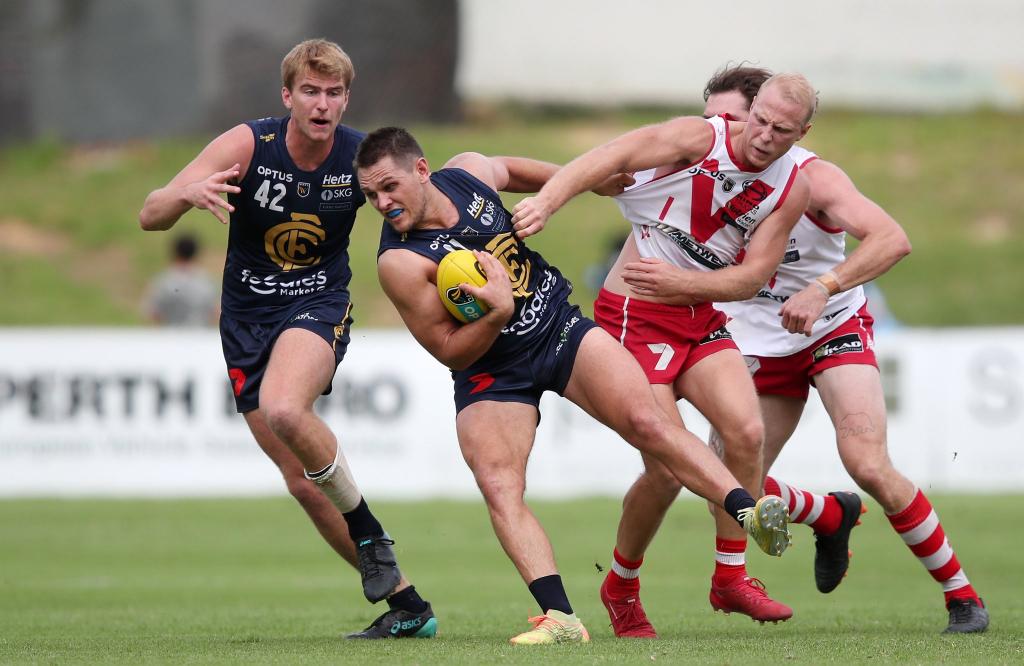 IT was a massive round of footy action with Launceston booking their place in the TSL Grand Final, Maroochydore setting up a meeting with Labrador in a QAFL preliminary final, and the home-and-away seasons wrapping up in South Australia and Western Australia. We recap all the action and big performances of the round in this week’s state leagues wrap.

Glenelg has fallen short of a spectacular 18-0 season after Port Adelaide came out six-goal winners in its final game of the season. Magpies forward Dylan Williams kicked three goals for the match, while Cam Sutcliffe and Boyd Woodcock had 27 disposals each. For the Tigers, Matthew Snook led all comers with 32 touches.

Sturt and Woodville-West Torrens both had big wins, with the Double Blues defeating the Roosters by 70 points, and the Eagles winning by 104 points against Central District. Tyson Stengle (four goals), Jack Hayes (four goals) and Kobe Mutch (three goals) were potent up forward for the Eagles, with Kai Pudney (31 disposals) racking up the most touches on the ground. Meanwhile, Sturt duo Abaina Davis (five goals) and James Battersby (36 disposals) were in fine form against the Roosters.

Elsewhere, Bryce Gibbs continued his form with another 32 disposals in the Panthers’ 12.17 (89) to 7.4 (46) win over the Bloods. Teammates Hayden Sampson (31 disposals) and Liam Fitt (four goals, 20 touches) were also dominant, while the highly touted Jason Horne-Francis (24 disposals, seven tackles) was impressive.

At Cooper Stadium, Norwood ended Adelaide’s season with a 43-point deficit as the Redlegs moved into third place and secured a double chance in the finals. Tristan Binder and Cole Gerloff both booted three majors for the home side, while Lachlan Gollant (2.5) had plenty of looks at goal for the Crows.

Launceston will face North Launceston in the big dance for the second year in a row after they were too strong for Clarence defeating them 13.11 (89) to 5.7 (37) in Sunday’s preliminary final. Cody Thorp (three goals) and Jay Blackberry (two goals) were multiple goal kickers for the Blues, while Jacques Barwick kicked two of his own for the Roos. The Blues have set up a mouth-watering final game of the TSL season, as the Northern Bombers will be seeking revenge after they went down in last season’s decider.

Broadbeach’s Jordan Moncrieff booted four goals as his side progressed straight into the QAFL Grand Final after a nail-biting contest with minor premiers Labrador. The two sides were separated by no more than 10 points at every break as the Tigers took a three-point advantage into three quarter time. It was the Cats who had the last laugh though, after Joshua Searl booted his first goal of the season in the final minutes to put Broadbeach ahead, before they held on to win by four points.

In the other match, Maroochydore’s dream finals run continues following their victory over Morningside. The game was evenly poised after the Roos shook off a four-point quarter time deficit to lead by seven points at half time. After kicking the final five goals of the match, the Roos stormed home to win 11.14 (80) to 6.10 (46) on the Panthers’ home turf. Roos forward Mitchell Scholard hit the scoreboard again with two goals, alongside teammate Lochie Laing who also kicked two. Benjamin Warren kicked two majors for the Panthers, but they were unable to stop the Roos who will now face Labrador for a chance to meet the Cats in the season decider.

The final round of the WAFL wrapped up with Subiaco claiming the minor premiership following their four-point win over Peel. The Thunder gave the league ladders a final term scare kicking four goals to one, but Subiaco managed to hold on. Leigh Kitchin, Gregory Clark, Ben Sokol, Brandon Matera, and Bailey Matera all kicked two goals for Subiaco, with Peel’s Jack Sears kicking three goals for the match.

Jye Bolton (32 disposals) and Bailey Rogers (30 disposals) found plenty of the footy for Claremont in their 22-point win over Swan Districts. Jack Buller and Alexander Manuel each booted three goals for the Tigers, while Christopher Jones kicked three majors for the Swans.

Elsewhere, Cody Ninyette kicked four goals for South Fremantle as West Coast’s season came to an end. The Bulldogs were too good for the Eagles coming out 45-point winners. Brayden Ainsworth finished his strong season with another 30 touches for the Eagles, while Nicholas Suban had 25 touches and 10 marks for the Bulldogs.

West Perth also looked strong heading into the finals series after they defeated Perth by 50 points. Trent Manzone (34 disposals) and Aaron Black (33 disposals) were ball magnets, while Sasha Kernutt led all comers with four goals. Perth’s Brady Grey had 26 disposals for the match with all of them coming off his boot.