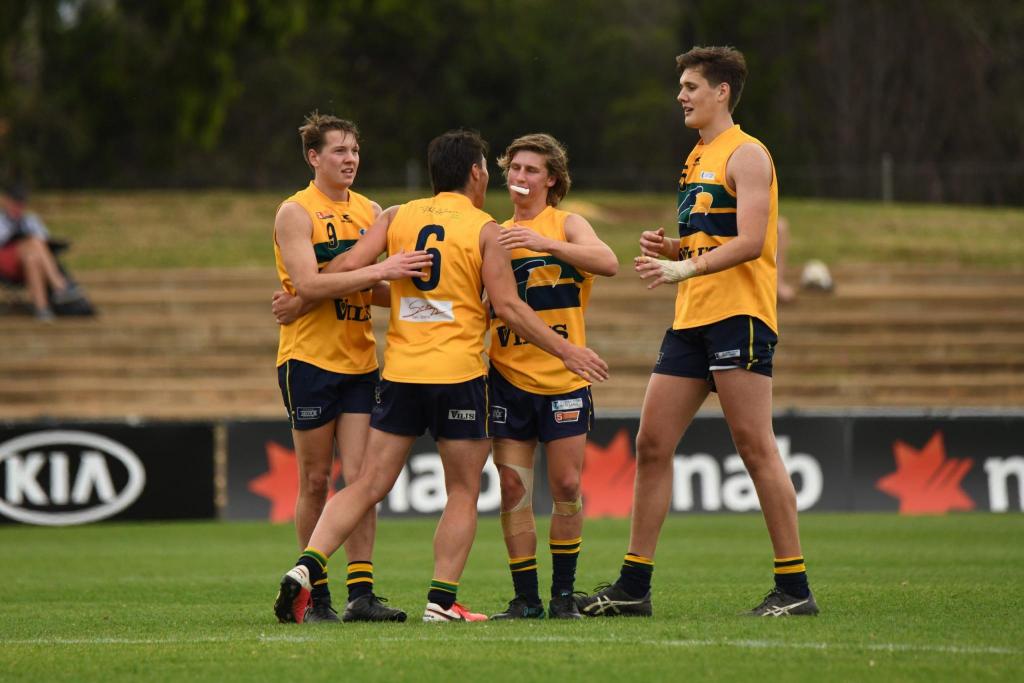 AFTER a solid season at Reserves level and a call up to the recent Under 19s championship match between Western Australia and South Australia, where he was one of SA’s best, Max Litster earned himself a late season League debut for the second placed Woodville-West Torrens.

The 2002-born defender ended his maiden senior outing as one of the top handful of ball winners for his side in the resounding 104-point victory as Woodville-West Torrens built confidence heading into their finals campaign, which begins next week against Norwood. Litster impressed most with his defensive focus through the game, and impressive speed with ball in hand.

Like most senior debutants, Litster started the game on the bench, having to wait until the six-minute mark to get on field. His first involvement in play saw him used in the corridor of the defensive 50 as he led into a smart spot for his teammate who was stuck up against the boundary line. Litster’s follow-up kick was penetrating to a teammate on the wing, who was able to continue the ball movement quickly given Litster put it in front of him so he didn’t lose momentum. As the quarter drew on, Litster got more involved with play from the defensive 50 and pushed up the ground, and whilst at times his ball use was below par, he never dropped his head and continued to present and try to get involved.

What was impressive about Litster was his defensive focus in open play, and ability to quickly transition and find his opponent, sticking with them and spoiling the ball before they could hold it. Litster also showed an ability to gut run defensively, at one point sprinting into the goal square to take a mark just before the goal line and move the ball on well by foot.

Coming out in the second term looking to have gained confidence, Litster’s ball use improved dramatically as he looked to use his run and carry more aggressively out of defensive 50, starting handball chains that led to inside 50s with some creative ball use. Litster showed off his leap a couple of times in the second quarter, taking an intercept mark in the middle of a pack by jumping above everyone else then using the ball well with his switch kick, and another time getting caught behind his opponent but making up the distance with his closing speed and again leaping to spoil his opponent.

Litster looked a lot more confident approaching contested situations or winning the ball under pressure in the second quarter, not being easily knocked around by opposition to get in good positions to win the ball. This was best demonstrated when there was a stoppage inside the Eagles defensive 50, Litster got the ball as it went over the top of the rovers, using his hips to block an opponent and quickly flicked it up to a teammate that was running past.

In a quieter quarter than his first two, Litster took some time to get involved in the game and have a meaningful impact, but came in strongly with a contested intercept mark just outside of forward 50, bombing long to create a contest for his forwards. Litster took a few marks around the ground with some smart positioning and his speed to beat opponents to the footy and hold it well. Unfortunately Litsters ball use dropped from where it was in the second quarter, missing teammates by foot when he was running straight at them, but looking good with his quick hands in close.

Litsters push up the ground was encouraging to see as he started to win more footy in the forward half and generally caused headaches for Central District as they tried to get the ball out of their defensive 50.

In a somewhat lacklustre end to the game, Litster didn’t get much of the ball, with the Eagles keeping the it in their forward half for the most of the quarter. When the opportunity was there for Litster to impact he took it with both hands, once again showing off his speed. One of his kicks was a nice highlight, chipping it over the top of a teammate so they could run onto the ball and then kick it long inside 50

Overall it was a promising senior debut from Litster following on from his impressive championship game against Western Australia, slotting into the Eagles’ backline seamlessly and looking like on of their more accountable defenders, focusing more on his opponent and cutting off opposition plays than being around the contest in hopes of getting an extra touch. His leap and speed allowed him to impact contests that he looked like he wouldn’t get to. The one thing Litster can improve on from this performance is to find more consistency with his ball use.