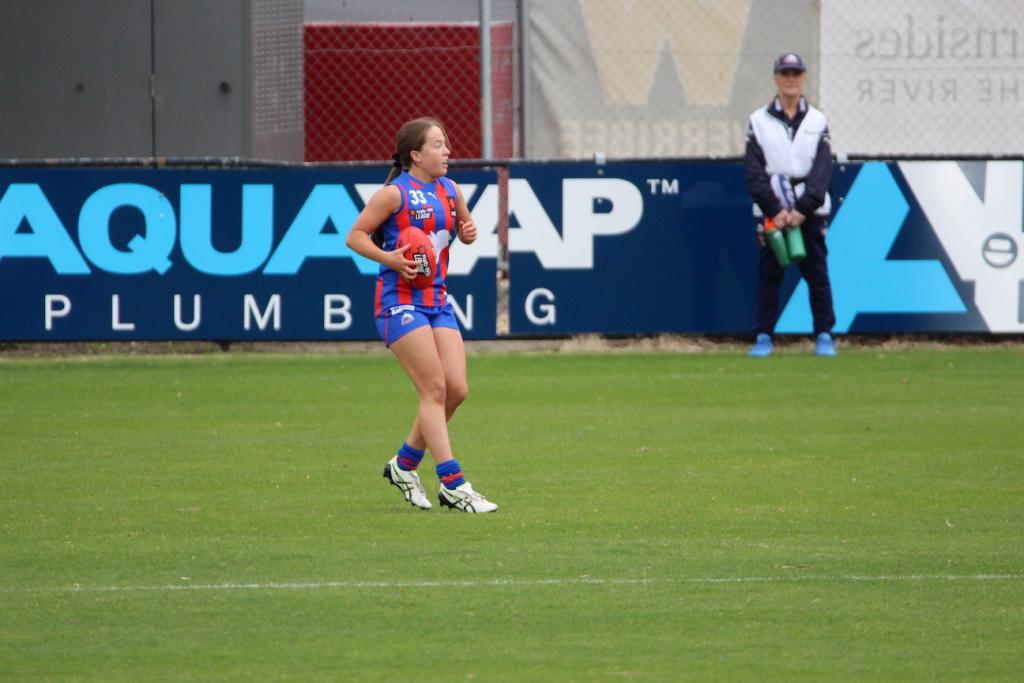 IN a new series looking towards the 2022 AFL Women’s Draft, we take a look at some teams that have outstanding prospects who showed plenty of promise in their bottom-age years to suggest the team might have plenty of potential for the next season. We continue with Oakleigh Chargers, who have plenty of depth and a number of players already experiencing Vic Metro duties through the Under 17s with a massive six players named, and another young star among the brightest prospects next year.

If you know, you know. Fleming only played the last three games of the season and won a flag for her troubles, but her talent is undeniable. The dual sportsperson who has also juggled her football with cricket – unsurprisingly following in her famous father Damien‘s footsteps (while her mother Wendy (nee O’Donnell) represented Australia Diamonds in netball at Under 21s) – looms as one of the best AFLW Draft prospects next season. She stands at 165cm, has already looked good as a midfielder or forward, and moves well, can hit the scoreboard and has class personified. Turning 17 in November, Fleming has enormous upside, and is the player that could take the competition by storm next season. She averaged 20 disposals, four tackles, 3.7 inside 50s and a goal a game from her three matches – two of them being finals against quality opposition – to really stamp her authority on the competition at just 16 years of age.

A tall midfielder who stands at 177cm, Taylor is a similar build to this year’s number one draft selection Charlie Rowbottom. Spending some time in defence where she averaged more than two rebound 50s per game, Taylor showed she will likely be a starting midfielder from Round 1 next season, and be tasked with the ability to get it out of congestion and forward. She caught the eye on a number of occasions moving the ball in transition, and she is a fierce tackler, averaging almost five tackles per game. Much like Fleming, Taylor has already tasted premiership glory, and played six games throughout the year after playing both in her Under 16s season.

A small midfielder who provides plenty of class and zip, Hart is the player who will receive the handball from congestion and take off to distribute down the field. She played all 11 games last season for the Chargers, becoming a rock solid option amongst some pretty talented players when running around. She averaged the 11.5 disposals and 3.2 tackles per game, with a round an inside 50 and rebound 50 per match as well, covering the ground. Hart is another of the Chargers’ brigade expected to lift as one of the more experienced members of the side. Also representing Vic Metro, Hart averaged eight disposals and 4.5 tackles at the Under 17 Championships.

Oakleigh Chargers had no shortage of players on top of the above trio, with another seven representatives all playing nine or more NAB League Girls matches in 2021. Charlotte Van Der Vlies and Mia Clift played predominantly midfield and defence respectively, running out in every match for the premiers, and earned Vic Metro honours. Jemma Rigoni and Jade McCormack (10 games each) were other defenders who finished with double-digit matches, as Ameille Smith booted seven goals in nine games. Ruby Vandenboom stands at 187cm and is a project ruck, playing three matches and was selected for Metro. Otherwise, Emily Tassiopoulous became a regular in the team as a bottom-ager playing 10 matches. Rianna Thiele, Grace Osborne and Gabriella Rawlings were 04-born talents who managed to taste NAB League Girls action with a couple of games each.