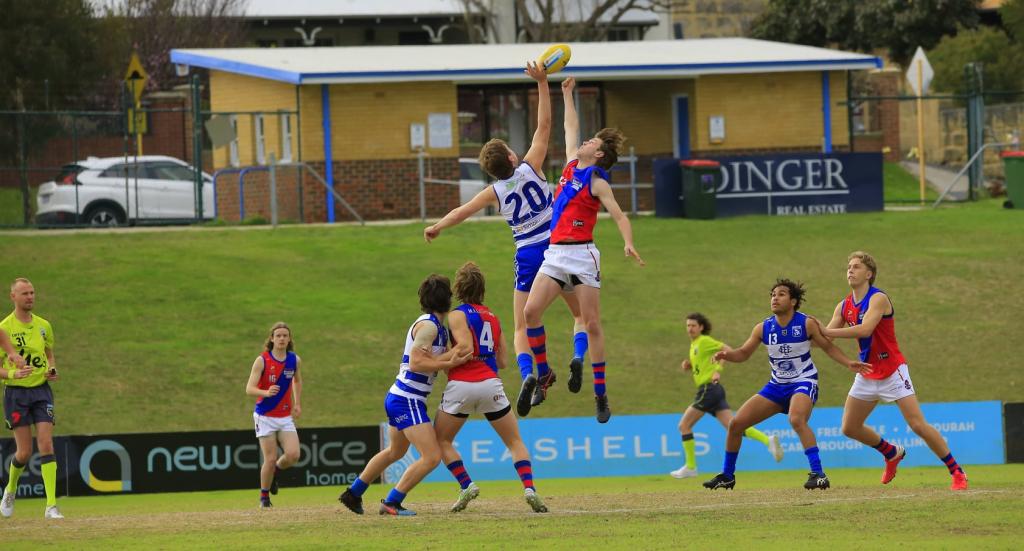 EAST Fremantle ruck-forward Joshua Cripps has struck a rich vein of form over the last three WAFL Colts rounds, with his latest effort yielding 20 disposals, five marks and three goals in the Sharks’ 21-point win over West Perth. Cripps, the brother of Carlton co-captain Patrick, has his sibling covered for height and was added to Western Australia’s Under 19 state squad after his Round 11 return from an ACL tear.

Having ultimately missed out on those representative duties on Saturday, the 199cm prospect sent a reminder of his talent and looms as a key figure in the Sharks’ upcoming finals campaign. We put Cripps’ Round 21 WAFL Colts performance under the Player Focus microscope this week, breaking down his game quarter-by-quarter.

Starting in the ruck, Cripps made a busy start to his Round 21 outing. He found plenty of ball across the opening 25 minutes, doing most of his work by hand with a total of three kicks and five handballs.

His first touch was a smart one, as he went up uncontested at a ball-up and had the presence of mind to take the ball before handing it off to a runner. He followed up his ruckwork and also got involved in general play, helping to keep East Fremantle moving forward under pressure.

While lumbering in his overall style, Cripps proved quite effective with his couple of short-mid-range kicks, but the third was a bomb inside 50 impacted by tackling pressure.

Again taking up the primary ruck duties before rotating forward, Cripps notched up a handful more touches and hit the scoreboard in term two with a nice bit of forward craft.

He brought his size and strong body to the contest and was trusted enough by his midfielders to be used as they moved the ball forward, playing within his limits and dishing off quickly.

His highlight for the term was the aforementioned goal, which he snared from a set shot 10m out. Cripps was stationed one-out deep inside 50 and did well to push off his opponent with one arm, while reeling the mark with the other. It capped off a solid half overall for the big man.

Leaning on the confidence gained from his mark and goal, Cripps got his marking game going a bit more with some better work around the ground, and neat disposal to go with it.

He positioned well behind the ball and after getting his hands to multiple contests, finally juggled a contested intercept mark at half-forward, before almost being caught as he wheeled around to kick.

He was also sighted working back into the defensive half to help East Fremantle move the ball forward, twice marking uncontested and delivering effective kicks to spread the play. In another solid term, Cripps added three kicks, two handballs and three marks.

With both sides evenly matched and battling for ascendancy all day, Cripps helped deliver a couple of daggers with a really promising final quarter. This time he started forward, stationed deep in hopes of utilising his one-on-one marking quality.

Cripps also took on the rucking duties inside 50 and formed a terrific partnership with Ed Curley, who he palmed down to twice at stoppages. He also got on the end of a Curley kick to mark and goal from 45m, extending the Sharks’ lead with his second major.

He booted another goal from about 15m out having been made to play on from a kick that didn’t travel the required distance, but he steadied and sold a bit of candy before finishing on his trusty left boot.

Ending the day with an equal game-high three goals on a day where they were hard to come by, Cripps had a big say in the final result and proved productive with 20 disposals, five marks, and 16 hitouts to go with his scoreboard impact.