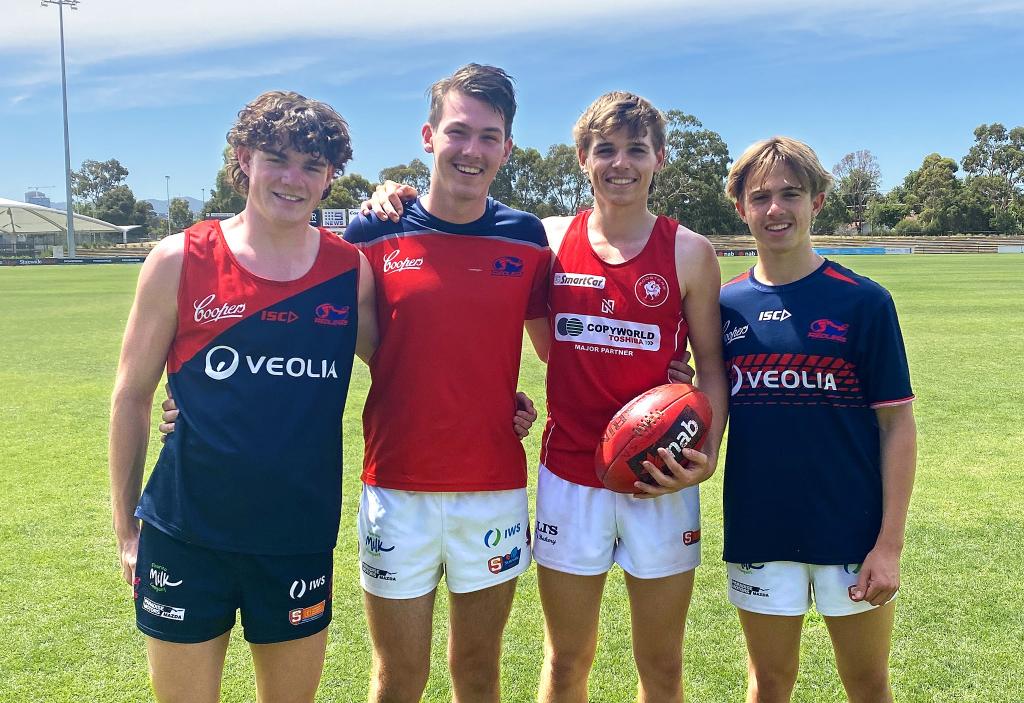 DASHING Norwood defender Alastair Lord made his return to SANFL Under 18s action in Round 18, marking his first outing in the grade since late-April. The 17-year-old notched 21 disposals and a goal on Saturday afternoon as his Redlegs fell comfortably to Glenelg, but marked a promising comeback with his usual run-and-gun passages.

Lord, a Rostrevor College student, missed a chunk of football due to injury this year and may well have been part of South Australia’s Under 19 squad on the weekend if not for that. He was selected in the initial Under 19 talent hub, and Phase 1 state side. We put Lord’s Round 18 SANFL Under 18s performance under the Player Focus microscope this week, breaking down his performance quarter-by-quarter.

Lord made a hot start in his return game, producing a highlight-reel moment and plenty of run. Initially stationed down back, he rolled up aggressively and was sighted all the way up at half-forward, looking for the release ball to set off and break the lines with his pace.

His first couple of touches came in quick succession; receiving inboard by hand and handballing again across the corridor, before getting the kick back and jetting inside 50 to register a scoring shot – which faded for a behind.

Lord rotated into the centre bounces after 11 minutes and made an immediate impact, collecting the ground ball and weaving into space with agility for the centre clearance to half-forward.

His highlight for the day came shortly after, as he took three running bounces from defensive wing to 45m out, showing serious speed to take on and burn opponents before finishing on his right boot.

Starting in defence once again, it didn’t take long for Lord to register a couple of quick touches. He came hard off the line at the first centre bounce to receive and hit a short kick, continuing his run to get the ball back and dish off a handball under tackling pressure.

Lord was a little quieter before his move into the middle at just over 10 minutes in, as Glenelg began to get on top. He looked to generate some momentum with a 1-2 play at the centre bounce but saw that play come unstuck. He was more successful later on with a two-bounce foray, which lead to a much-needed Norwood goal.

It was becoming evident that every time Lord was able to carry forward, the Redlegs would score. He capped off an exciting half by bringing his numbers tally up to five kicks, six handballs and a goal.

Having lit up the game with a couple of eye-catching runs in the first half, Lord found much less room to operate after the main break. He continued his quest for handball receives though, tracking the play well and mopping up at ground level.

His aggressive attacking intent continued to be evident when Norwood gained possession, as Lord would get an initial touch and continue to break forward in hopes of receiving back down the line.

He managed a couple of nice spurts of speed from defence, sweeping up and using his first few steps to manufacture a bit of time and space before disposing. He added a single kick along with five handballs and another minor score, which he notched 30m out on the run after steadying nicely.

Glenelg coasted home to a comfortable victory in term four, so there wasn’t too much fighting for the Redlegs left to do. In his usual defence-midfield rotation, Lord notched two kicks and two handballs across the final 26 minutes.

He found a bit of run on defensive wing, taking on an opponent before helping himself to a bounce and handballing off, again looking for a 1-2 passage. Lord also helped to sweep up across Norwood’s defensive 50, which saw plenty of ball throughout the day.

Overall it was a steady finish to a game where Lord was able to showcase some of his best traits and mark a positive return to SANFL Under 18s action.

It hardly takes long upon watching Lord to see what he does best. Particularly in the first half, he looked like Norwood’s most dangerous ball carrier and helped himself to many running-bounce passages which broke the play open. Whenever he was able to receive on the outer and jet into clear space, the Redlegs found ways to score. Having been eased into some midfield minutes from his usual defensive post, it is clear that Lord can work on the contested side of his game. He is more of a release outlet at the moment, but can contribute some more ground level ball winning and tackling efforts in addition to his line breaking strengths.