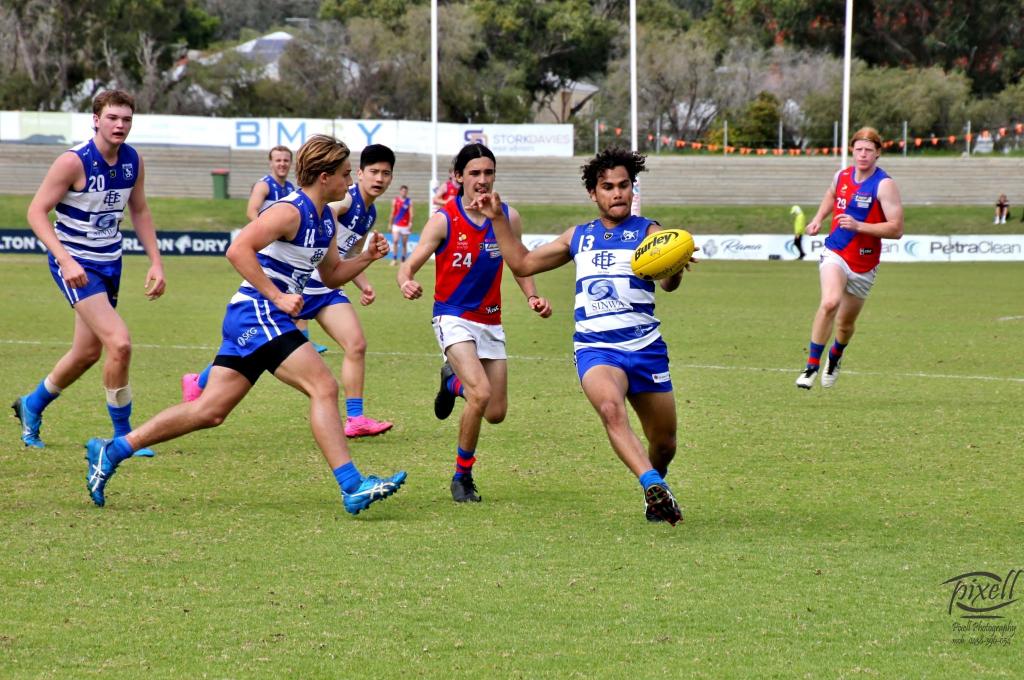 THE 2021 WAFL Colts top five has been locked in after Round 21 went down this past weekend, with Swan Districts officially crowned minor premier. East Perth secured third, while East Fremantle moved clear of West Perth in fourth with just one round of regular season fixtures to play out. After their National Championships dig on Saturday, state Under 19 squad members are also due to return. We recap all the action and outstanding performances in our weekly wrap.

Peel Thunder will play off for seventh spot against Subiaco next week, after jumping the Lions with a 38-point win over Perth on Friday night. The hosts posted a whopping 32 scoring shots to nine from 29 more inside 50s, running rampant with double Perth’s amount of handballs. After the 10.22 (82) to 7.2 (44) loss, the Demons are one more defeat away from a winless home-and-away campaign.

Luke Polson was a force to be reckoned back in his usual forward post, registering 3.6 from his 15 disposals and seven marks. Michael Sellwood lead all comers with 23 touches while also laying 14 tackles, as Ethan Donaghy (20 disposals, eight inside 50s) was another who got to work for the victors. Elsewhere, smalls Byron Finch and Scott Tuia proved productive, while bottom-age big man Jackson Broadbent returned to the grade after his three-game League venture.

East Perth secured third place on Saturday morning with a 51-point thumping of Subiaco, seeing the Lions fall to eighth. The Royals made better of possession, producing 16 more scoring shots from just four more inside 50s and while inaccurate at times, they came home strongly with four goals to one in term four. With one round left to play, East Perth needs to make up six per cent and hope Claremont loses to claim second spot.

Kalani Brooks was once again outstanding for the Royals, amassing a game-high 28 disposals, nine marks and two behinds in his side’s victory. Meanwhile, the likes of Jayden Peak (22 disposals) and Oscar Armstrong (21, one goal) extended their consistent runs of form in black and blue. For Subiaco, speedy small Richard Farmer proved a handy addition with his team-high 26 touches, seven inside 50s, and 1.3.

East Fremantle nabbed a crucial 21-point win over finals rivals West Perth on Saturday, moving a game clear of the Falcons in fourth with both sides now locked into the top five. West Perth lead by a point at the second and third breaks, but the hosts kicked away with 4.5 to 1.1 in the final quarter to finish with double the amount of scoring shots, and give Shark Park the right kind of send-off.

Minor premier Swan Districts again flexed its muscle on the eve of finals, notching a comprehensive 59-point win over South Fremantle on the road. Swans remarkably had less of the ball but made better use of it in advanced territory, requiring an average of just 9.6 disposals per scoring shot. While the victors are two games clear in top spot, South Fremantle ended its season with four-straight losses and will narrowly miss out on finals with a bye next week.

There were plenty of big performances for Swans, lead by the likes of Elijah Hewett (28 disposals, nine inside 50s, 3.2) and Tyrell Metcalf (15 disposals, 4.4). Noah Hannan and Ben Hewett were others to post good numbers, with state squad talent still to come back into the side. Caleb Stephens again put in a shift as the only Bulldog to notch over 20 touches, racking up 33 and seven inside 50s. Mitch Brown also fared well in just his second game back from injury, managing 18 disposals and seven marks.