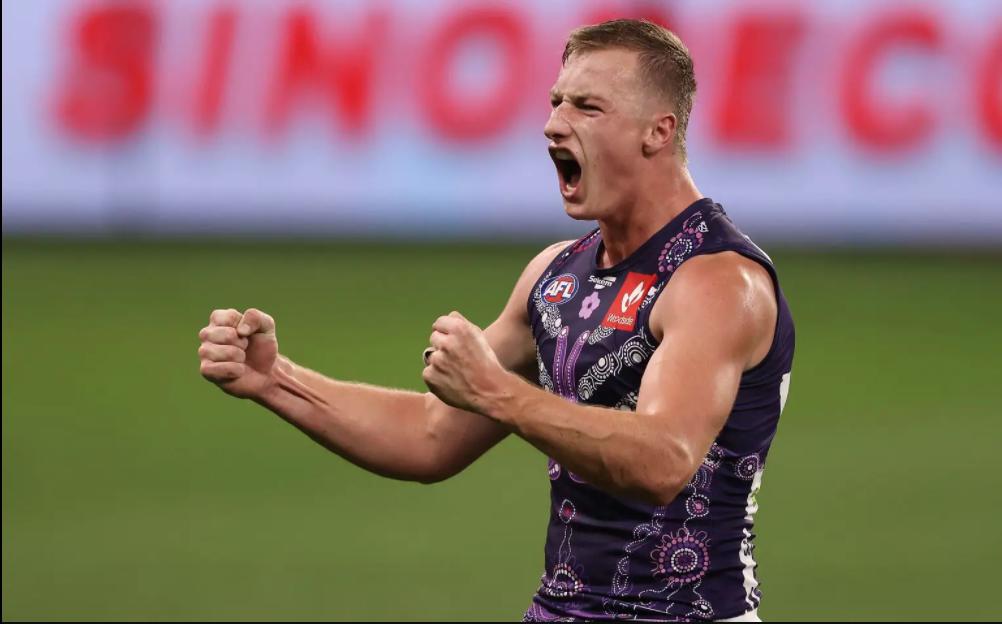 AHEAD of the 2021 AFL National Draft, we cast our eyes back 12 months ago to when the newest draftees had their names read out, and what they have accomplished since at the elite level. In the fourth piece of 2020 AFL Draft standouts (first chance at AFL level), we look at the 11th and 12th placed teams in Fremantle and Richmond.

Four out of five of Fremantle’s 2020 draftees made their debut this season, with Heath Chapman (six games), Brandon Walker (10 games), Joel Western (four games) and Josh Treacy (15 games) all featuring, while Nathan O’Driscoll played 13 games in the WAFL.

Treacy was the pick of the bunch, and the big man had an impressive first season bagging 13 goals in his 15 matches. The 193-centimetre forward nicknamed ‘The Big Cohuna’ has become a cult-figure across the league after being picked up from Cohuna, Victoria via Bendigo Pioneers in the rookie draft. Treacy showed this season that he wasn’t afraid to throw his weight around, crashing packs and attacking the ball on the ground, while he took some nice marks both contested and leading up at the footy. Treacy was a multiple goal kicker on three occasions with his best outing coming against the Bulldogs in Round 12 where he kicked three majors. He took a season-best four contested marks against Brisbane in Round 21. Treacy’s forward 50 pressure was very good averaging 1.2 tackles inside 50 (ranked above average) and 13.9 pressure acts (ranked elite). Overall, he averaged 7.7 disposals, 3.4 marks, 2.1 tackles and 0.7 goals in his first year.

Chapman played six games early in the season and looked to be gaining some momentum playing across the backline. At 193 centimetres, Chapman was a good intercept defender who also used the ball well off half-back. He had 18 disposals in Rounds 3 and 4, averaging 14.2 for the season. He also averaged 4.5 marks and 2.5 spoils before he suffered a season-ending shoulder dislocation which put his year to bed.

A similar player to Chapman was Walker who played 10 games, making his debut in Round 13. Walker loved to run off half back and he generally used the ball well. He often rebounded out of defence and followed up with his skills to find teammates inside forward 50. He averaged 1.8 inside 50s (above average) for the season, and his best form came towards the end of the year where he averaged 14 disposals across the last three rounds.

Speedy small forward Western played four games for the season and showed some good signs of what he could offer in the future. While he didn’t manage to kick a goal, Western showed his raw pace and athleticism during his time on the ground. Western also played 11 games for Peel in the WAFL averaging 17 disposals and 1.2 goals per game.

O’Driscoll did not feature for the Dockers this season but will be pushing for a debut in 2022 after a successful WAFL campaign where he averaged 14.8 disposals and four marks.

Rhyan Mansell played 13 games for the reigning premiers in his debut season after being picked up in the preseason draft from North Launceston. Playing across half back, Mansell showed that he was quite capable at AFL level, averaging 11.1 disposals, 2.7 marks and 2.2 tackles for the year. He stood out with his ball use going at 80.6 per cent disposal efficiency, and his defensive work was sound averaging 2.1 spoils per game (ranked above average). Mansell’s best form came towards the end of the season when he averaged 15 disposals across Rounds 17 through 21.

After playing nine games in the VFL averaging 11.3 disposals, 5.8 tackles and kicking 4.5 for the season, Maurice Rioli Jnr was given his chance in the big time, kicking a goal in each of his two matches. He is an exciting prospect for Tiger fans with his speed and pressure a big part of his game. Rioli had two tackles in both matches and 36 pressure acts (an average of 18, ranking him above average). Rioli has a great goal sense, and with his continual development he could turn into a very dangerous small forward quickly.

Big man Samson Ryan was Richmond’s first pick in the 2020 National Draft, coming from Sherwood in Queensland and a Brisbane Lions Academy graduate. He played one game this season in Round 15 against St Kilda, and while he did not have a disposal, there are some good things to look forward to with this young man. He may be 206 centimetres, but he is mobile and has shown good ruck craft in his VFL performances. He is also a capable forward having kicked 15.7 and averaged 4.5 marks for the Tigers reserves team.