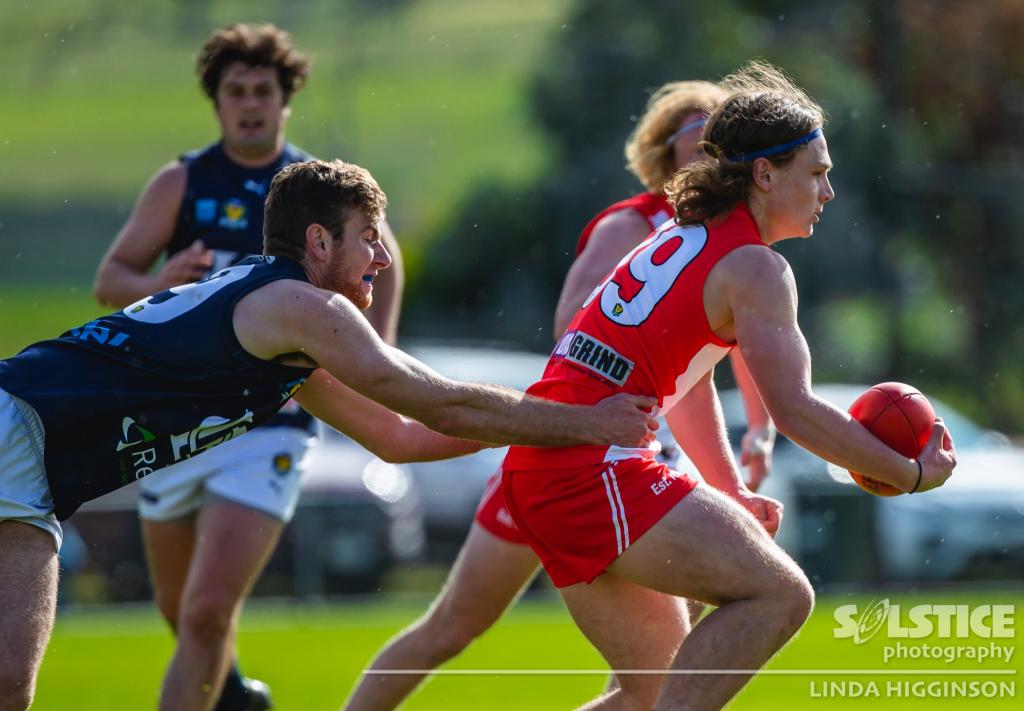 CLARENCE will face minor premier Launceston in a Tasmanian State League (TSL) preliminary final battle after they defeated the Tigers 8.12 (60) to 5.9 (39) in the semi-final on Sunday. Draft Central kept a close eye on the three exciting young Clarence players, during the Roos’ 21-point victory.

Holmes was the main ruckman for the Roos on Sunday, and he had a great battle with Tiger Marcus Gardner all day. The 195cm big man used his size and strength well when competing in both ruck and marking contests. A common theme during the game was Holmes’ ability to outmuscle opposition ruckman and take the ball straight out of the air where he would then be able to get the ball forward quickly by foot or handball to a teammate. His ruck craft is decent for a young player with a few nice hit-outs finding Roos players throughout the game.

The 18-year-old has a high work rate, often getting involved in open play and working hard to be in the right positions. He knows how to play to his strengths and one great example was in the later stages of the third term when a Tigers player kicked the ball long from a kick out, and Holmes was able use his strength to hold off Gardner with his right arm and juggle a mark in his left. He was a presence throughout the match, laying a couple of strong tackles and using his body in the contest. He is an exciting prospect to look forward to as he continues to develop his game.

Playing a mix of midfield and forward, Gardner had a solid game kicking one goal and finding a bit of the footy. He began the game in the middle and got busy quickly winning the first centre clearance and shortly after finding himself in some space where he marked then kicked long inside 50 where the Roos booted the first goal of the game. His trademark speed and evasiveness were on display right throughout the match often bursting away from a contest to dispose of the footy.

Gardner’s work rate continued in the second quarter, and he showed his capacity as a two-way runner. When he has the ball, he runs and uses his skills to get it forward and when he does not, he works hard to lay a tackle or pressure opponents into an error which often leads him to gaining possession.

He started the third term forward and had an impact straight away kicking the first goal of the second half. He positioned himself well and when the ball was spiked forward from a stoppage, he was able to gather it, burst away and kick the goal. It wasn’t his only chance either, with Gardner kicking another couple of behinds for the match. His pace and skillset were a worry for defenders, and his ability to get up the ground and drive the ball forward gave his teammates scoring chances too.

Overall, it was another good game from Gardner on Sunday, showing his ability to play as an inside or outside midfielder, but also a player that can go forward and be a cause of concern for the opposition team.

Smith might not have been the most impactful player on the ground, but he showed plenty of good signs for an 18-year-old tall looking to impress potential AFL suitors. He played most of this game up forward, with a couple of stints in the ruck and some forward 50 stoppage work. After starting on the bench, Smith came into the ruck and in his opening moments followed up a ruck contest with a strong tackle, setting the tone for his day.

While Smith was beaten on most occasions when going into the ruck, it was his second efforts and groundwork that stood out. As a forward, he competed well and did what big men are expect to do when they can’t mark it- make a contest and bring the ball to ground.

In the second half, Smith started to get busier, crumbing a pack and launching the ball inside 50 and laying a nice smother to ensure the ball remained in Clarence’s attacking half. While these actions are not typically associated with bigger men, the 194cm Smith is prepared to do the hard work, and while he did not kick a major, he was rewarded by getting on the end of a couple of nice marks, allowing him to get the ball inside 50 to create scoring chances. Smith is a promising young player and with a bit more development he could turn into a damaging forward/ruck at any level.