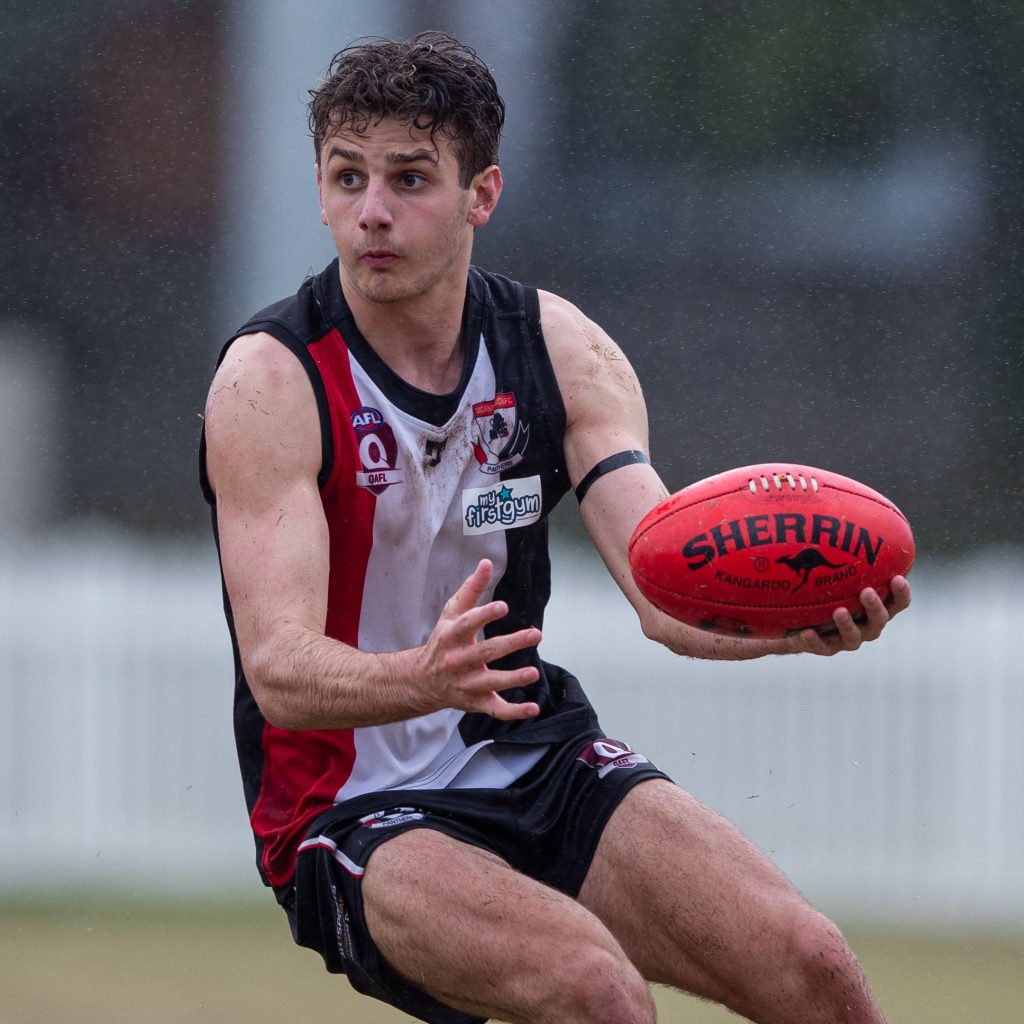 THE 2021 QAFL finals series kicked off this past weekend, with a pair of elimination finals seeing the two lower-ranked sides pull off memorable upsets. Those teams in question were Morningside and Maroochydore, who will now face off in Saturday’s second semi-final after their narrow victories.

As this year’s reigning premier, the Panthers have plenty of work to do to defend their crown from fifth, but started off their finals campaign strongly. They raced out to an early lead and were over 40 points in front at stages, before holding off a fast-finishing Surfers Paradise to come away six-point victors on the road.

Among Morningside’s squad was a couple of very handy inclusions, namely Brisbane Lions Academy products Saxon Crozier and Toby Triffett. Both made just their second QAFL appearances for the season after runs in the VFL, while Max Nelson lined up down back alongside bottom-ager Ben McCarthy.

Max Pescud made up the Gold Coast Academy representation for Surfers, rotating forward from the wing to be one of the better Demons afield. We take a look at how all five of the aforementioned northern academy prospects fared on the elimination final stage, in a special QAFL edition of Academy Watch.

One who appears to have gained a wealth of confidence and knowledge from his time in the VFL, Triffett was a dominant contested ball winner on Saturday. The blue-booted midfielder proved strong with his ability to fire away handballs under tackling pressure and even break a few, looking quite effective by hand. He did tend to hack his clearing kicks a touch, but had no trouble finding the ball with his wickedly clean hands and solid frame. In a tone-setting act, his lone major for the game came during Morningside’s opening term flurry, as he burrowed in to rip the ball free from a forward 50 pack and snapped it home. A top performance.

Returning to QAFL action alongside Triffett after his own VFL tenure, Crozier took up a very familiar role on the wing for Morningside. He proved a little scratchy with his very first touch, but fixed up quickly to level with the pace of the game. Crozier had some unlucky moments in the first half with free kicks against, but clunked a nice intercept mark and looked promising when released into space via hand. That trend continued as he worked into either arc and proved productive by foot, spearing the ball to teammates. He also hit the scoreboard in term three, tracking the ball well off a stoppage with gut-run inside 50 to get the spill and convert into an open goalsquare.

The sole bottom-ager in this lot, McCarthy has played 13 games for the Panthers’ senior side this year and looks a settled member of the lineup. He played in defence on Saturday but was sighted trailing his opponents all the way up to half-forward, ensuring they wouldn’t get an easy kick rolling up the ground. A touch light-on, McCarthy often knew to stay down as contests formed down the line, helping to mop up the spills and kick forward. He had a couple of nice moments in the third quarter, laying a holding the ball tackle and smothering his opponent under a minute later after he had turned the ball over.

Nelson was one of the Panthers’ most important players in their elimination final triumph, playing a key role down back with plenty of work to do. He was tasked with the kick-in duties and often roosted the ball well beyond defensive 50, while also providing a bit of dash on the rebound with a good amount of confidence to take on opponents. He looked to crash packs from behind if the ball came back his way and managed to chime in with some important intercept possessions, making for a really solid game across the defensive arc.

Having taken up a starting spot on the wing, Pescud made arguably his most profound impact up forward. He showed a good turn of speed and quick skills when stationed further afield, before bringing his overhead marking ability to the fore inside 50. Pescud produced a few key plays during term two upon his switch; cutting across a pack to mark inside 50, manufacturing a goal assist with his twists and turns, and splitting a 1v2 situation which lead to another major. While he looked to be unselfish when in possession near goal, Pescud nabbed a major of his own in term four to help sustain Surfers’ fightback. His tackling intent and pressure was also terrific throughout the game.