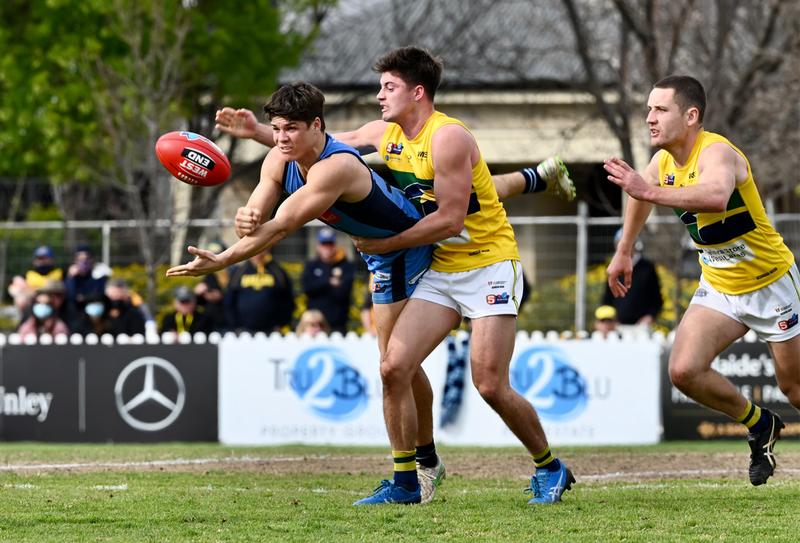 FINALS action got underway in the Tasmanian State League (TSL) this past weekend, with one grand finalist already booked after a major upset. Meanwhile, the race for top five spots will go down to the wire in South Australia, and the best handful of West Australian sides are set to duke it out for ascendancy on postseason’s eve. We take you through all the results and big performances in this week’s state league wrap.

The penultimate regular season round of SANFL action was completed on Friday and Saturday, with three games drawing the competition even closer to finals. Kicking off proceedings on Friday night, Glenelg moved one win away from completing an undefeated home-and-away campaign after downing West Adelaide by an even six goals. Leading from the get-go, the Bays got their handball game going and were strong around the ball.

Brett Turner lead all-comers for the Bays, notching 35 disposals and seven clearances to go with 12 tackles in a mammoth effort. Matthew Allen also ticked up to 30 touches, while Darcy Bailey notched a game-high three goals. Thomas Keough matched that feat for the Bloods, whose top ball winner was Kaine Stevens (23 disposals, seven marks).

A couple of close encounters on Saturday had big repercussions on the top five. Among them, Woodville-West Torrens dealt a blow to Sturt’s finals hopes by beating the Double Blues 11.6 (72) to 9.8 (62). In one fell swoop, the Eagles locked in second spot and kept Sturt a game outside the five.

James Tsitas racked up 12 more touches than any other player with 42 for the Eagles, whose eight individual goalkickers included Riley Knight, Tyson Stengle, and Daniel Menzel. For Sturt, James Battersby contributed seven marks and six clearances among his 30 touches, as Abe Davis (25 disposals, 3.2) again proved impactful.

Norwood rounded out the weekend’s action with an important win over North Adelaide, locking the Redlegs into finals at a 10-7 record – equal with the Roosters – with a round to play. Richard Douglas was at his reliable best with a game-high 29 disposals and nine marks, with the likes of Declan Hamilton and Nikolaus Rokahr following his ball winning lead. Meanwhile Campbell Combe (26 disposals, 10 tackles) brought his usual two-way presence for the Roosters, along with Harrison Wigg (25 and five).

The 2021 TSL finals series got underway on the weekend, with a pair of semi-finals split over Saturday and Sunday. In the first-versus-second qualifier, North Launceston upset minor premier Launceston, while Clarence eliminated Tigers the following day. The Northern Bombers secured a grand final spot by besting Launceston to the tune of nine points, coming home strong after trailing at every break.

Captain Jay Foon and coach Brad Cox-Goodyer both hit the scoreboard to be among the best Bombers alongside Alexander Lee and Nathan Pearce (three goals). Meanwhile, Jake Hinds was outstanding for the Blues with a game-high four majors as his side prepares to bounce back against Clarence in next week’s preliminary final.

The Roos will be buoyed after downing Tigers on Sunday, winning their first final since 2013 in a physical affair. They also lead at every break, booting six of their eight goals at one end to come away 21-point victors.

Zac Buechner lead from the front for Clarence, while Noah Holmes fared well in an epic ruck duel and Colin Garland snared an equal game-high two goals. First year Tigers skipper Lachlan Clifford was terrific in his side’s final game for the season, along with Marcus Davies.

The WAFL returned to a full five-game allotment in Round 21, with the top five sides locked in ahead of the next week’s final regular season weekend. Subiaco remains in the box seat to secure a sixth minor premiership in seven years, among the weekend’s winners.

The Lions knocked off East Perth by 14 points, ensuring the Royals will finish this season in eighth spot. Lachlan Delahunty (28 disposals, seven marks, 21 hitouts) and Chad Harris (25 disposals, one goal) were prominent for the victors, as Ben Sokol snared 2.3. Angus Scott lead all comers with 34 touches for East Perth, while Aidan Lynch and Christian Ameduri both kicked two goals from just under 30 disposals each.

South Fremantle and Claremont remain in the hunt for top spot, but will rely on big a Subiaco loss and sizeable percentage boosts of their own to stand any chance. The Bulldogs held on to beat Swan Districts by five points, while the Tigers thumped West Coast by 96 points with plenty of dominant performances.

Elsewhere, East Fremantle capped off its season with a remarkably accurate 20.3 (123) effort in the face of West Perth’s 9.23 (77), with the Falcons’ fate in fourth effectively sealed as the Sharks miss finals. Hugh Dixon’s formidable form continued, as he booted five goals from 14 disposals and nine marks for the winners.

Peel Thunder jumped into seventh spot after defeating Perth by 43 points in a remarkable comeback effort. The Demons skipped six goals ahead at quarter time, but were kept goalless in the second and third terms as Peel skipped ahead. The Demons are still a chance to be relegated to wooden spoon position, depending on next week’s results.