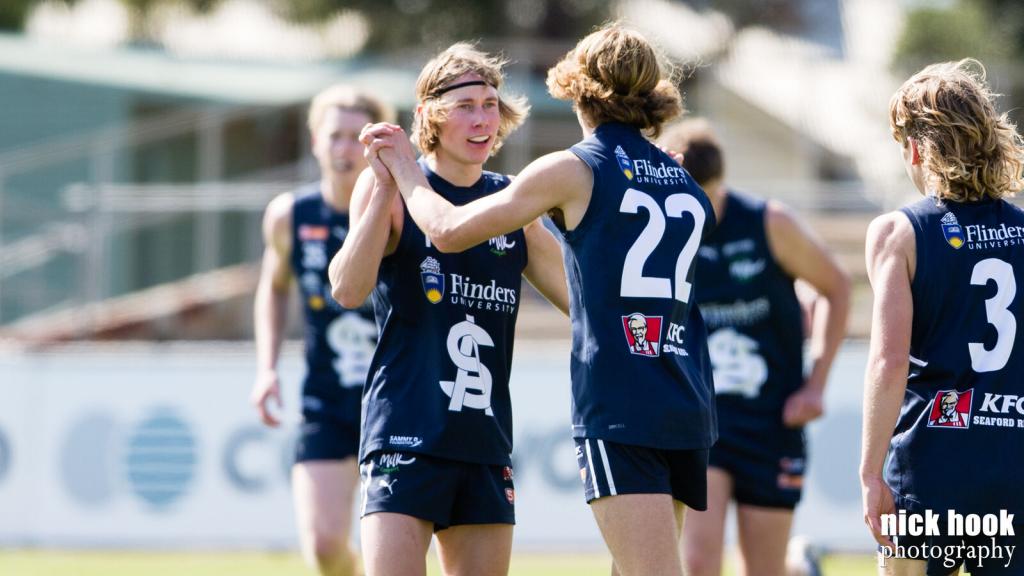 AS South Australia’s Under 19 team jetted off to Perth to face Western Australia, the final round of the SANFL Under 18 competition took place across metropolitan Adelaide on Saturday. Glenelg collected the minor premiership, winning 15 of their 18 matches to sit three games clear of second-placed Woodville-West Torrens. After finishing on the bottom of the ladder with just one win to their name last season, West Adelaide jumped to third spot with 12 minor round victories. Meanwhile, South Adelaide won eight of its last 11 matches to round out the top four ahead of the SANFL Under 18 finals series.

North Adelaide bounced back from a lacklustre first term to claim a 27-point win over Sturt at Prospect Oval. Talented utility Adam Heath booted the opening goal of the game at the 11-minute mark of the first term, before unanswered goals to Sturt’s Tom Gibson, Luca Slade, Cormac Dwyer and Hugo Kittel gave Sturt the strong start they were after. Roosters key forward Isaac Keeler kick-started a strong second term from the home side with an early goal, before Max Blacker and William Dowling booted goals and Heath nailed his second. The game would ebb and flow until the final siren, with both sides finishing their respective seasons in attacking fashion.

Despite the Double Blues providing a close contest, the Roosters proved too strong, led by midfielder Harvey Harrison. Named as an emergency for the state game, Harrison gathered 34 disposals, seven marks and 10 clearances to lead North to victory. Heath finished with three goals from 27 disposals, while Dowling booted 1.3 from his 30 touches. Hughen Wissman sent the ball inside 50 on a game-high 13 occasions from 29 disposals and eight marks. For the Double Blues, Alex Holt gathered 26 disposals, six marks, five inside 50s and 10 rebounds, while Kade Harvey was solid in defence, managing 20 touches and 10 rebounds. Jake Aish, Declan Hortle and Tom Gibson each finished with two goals to their name.

A slow start condemned Central District to a hefty defeat at the hands of a strong Woodville-West Torrens outfit. The Bulldogs appeared helpless as the Eagles added seven first term goals to race away to a 39-point lead at the opening break. Tall swingman Jonte Hunter-Price added two goals and five Eagles booted singles in the opening term at X Convenience Oval. The Eagles proved a class above in the second term, with their talented midfield getting on top. The Bulldogs stemmed the flow after the main change, with key talls Cody Gilchrist and Brodie Tuck hitting the scoreboard, but ultimately fell by 68-points.

Eagles ball magnet Dustin Launer continued his rich vein of form with another outstanding performance. The midfielder collected 26 disposals, eight marks, five clearances and six inside 50s to go with his three goals from the engine room. The ever-reliable Brock Thomson had another strong game, ending up with 28 disposals and eight marks, while Jay Watson managed 27 disposals, nine marks and a goal. Hunter-Price and fellow forward Will Pearce finished with three goals for the visitors, with Charlie Blair and Ben Schwartz adding two apiece. For the Bulldogs, Thomas Clements was strong down back, collecting 36 disposals, 11 marks and eight rebounds. After leading Sacred Heart to victory in the All Schools Cup during the week, Luca Whitelum gathered 25 disposals and seven marks for Central District, while fellow Barossa product Austin McDonald collected 21 touches and four clearances.

An eight-goal second term propelled minor premier Glenelg to victory over the defending champion, Norwood at Coopers Stadium. Two goals in as many minutes to clever small forward Harry Tunkin gave the Tigers the early ascendancy before goals to Alastair Lord and Benjamin Belperio evened things up heading into quarter time. After Redleg Jack Ianniello booted an early goal to start the second term, the Bays kicked seven unanswered goals to race out to a lead. The sides both added two goals in an even third quarter, but Glenelg’s dour defence held Norwood goalless in the final term to run out 48-point victors.

Despite missing defensive duo Oscar Adams and Cooper Beecken, speedster Lewis Rayson, midfield bull Hugh Stagg, classy wingman Nasiah Wanganeen-Milera, and outside ball winner Jacob Owens to state commitments, the Bays showcased their tremendous depth to take care of business away from home. Darcy Gluyas stood tall in the midfield, accumulating a game-high 38 possessions, six marks, five tackles and five clearances in a best-on-ground performance. Lachie Burtt and William Wiseman both nailed three goals for the match, with key forward Jack Harding adding a couple. Shouldering the bulk of the ruckwork for the Redlegs, Ned Carey won 23 hit-outs and kicked a goal from his 10 touches. Jayden Gale collected 21 disposals, five marks and a goal and the returning Alastair Lord finished with 21 touches of his own.

West Adelaide will commence its finals campaign in winning form after claiming a three-goal win over South Adelaide in a seesawing affair at Hisense Stadium. The Panthers kicked the first four goals of the match to take a healthy lead into the first break before Westies hit back with a four-goal-to-zero second quarter to take a slim two-point lead into half-time. Despite some wayward accuracy in-front of goal, the Bloods kicked on after the break to secure their twelfth win of the 2021 season.

Talented bottom-aged midfielder Kobe Ryan was the star of the show for the victors, booting three goals and collecting 24 touches for the home side. He was well supported in the middle by schoolmate Tyson Coe, who won seven clearances in his 21 disposals, and the consistent Jesse Thackeray, who accumulated 22 possessions, seven marks and five tackles. Rebounding defender Charlie Pridham notched 23 disposals and managed seven rebounds. The forwardline combination of Luke Young and Tom Scully proved effective, with the former booting three goals and taking nine marks and the latter adding 2.4 in-front of goal. Lachlan Hayes played an important role down back for South, gathering 31 possessions and 12 rebounds, while midfielders Cooper Rogers, Angus Bradley and Luke Mitton each won plenty of the ball. Star forward Jack Delean was well-held by the Bloods’ defence, booting just one goal for the match to finish the home and away season with a remarkable 32 majors in just 12 games. Bottom-ager Koby Cockshell proved a handful though, taking three contested marks on his way to kicking four goals.