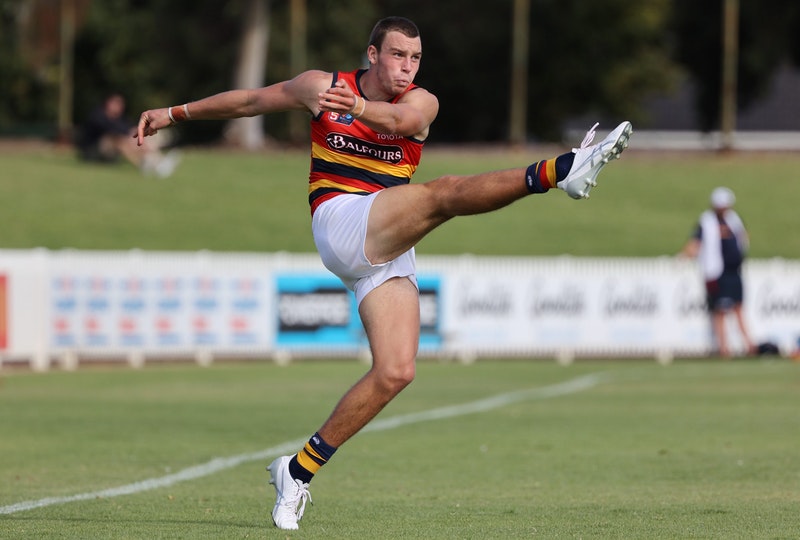 AHEAD of the 2021 AFL National Draft, we cast our eyes back 12 months ago to when the newest draftees had their names read out, and what they have accomplished since at the elite level. In the second piece of 2020 AFL Draft standouts (first chance at AFL level), we look at the 15th and 16th placed teams in Gold Coast and Adelaide.

The Gold Coast did not blood any 2020 draftees until Joel Jeffrey made his debut in Round 20 on the back of a nine-goal effort in the VFL against Aspley the previous week. Jeffrey played the last four games of the season and kicked 2.4. He showed in the VFL that he can play at either end of the ground, and in his few AFL games, his athleticism and versatility were a highlight, something that could make him a handy asset for the Suns.

Alex Davies played in the final round of the season after averaging 15.5 disposals and 5.0 tackles in 11 games of VFL action. The inside midfielder attended 14 of 30 centre bounces and had 16 disposals, 14 contested possessions and six tackles (including two inside forward 50) in an impressive debut match. He is 191 centimetres tall with good agility, and he has already shown glimpses in his first match that he can win the footy on both the inside and outside and evade opponents, he also took a strong contested mark in the final quarter.

The Suns’ first pick in the 2020 National Draft, Elijah Hollands, did not make his AFL debut this season, instead he was eased back through the VFL after recovering from an anterior cruciate ligament (ACL) injury suffered prior to being drafted. He played four games and recorded 19 disposals in his most recent outing against Aspley. He has a lot of potential as a classy midfielder/forward and will be one to watch in 2022.

Aiden Fyfe and Rhys Nicholls joined Hollands in the Suns’ VFL team this season, playing eight and five games each. Both players like to run off half-back or play on the wing and use their skills moving forward. Fyfe averaged 16.4 disposals and 5.1 marks, while Nicholls averaged 11.2 disposals and 3.0 marks per game.

Adelaide climbed three spots on the ladder this year following last season’s wooden spoon, and with the team improvement came the development of some promising young talents including Riley Thilthorpe, Sam Berry and James Rowe.

Thilthorpe, the second pick in the 2020 National Draft, stunned everyone on his debut in round six, kicking five goals and showing his ability in the air against the Hawthorn defence. Thilthorpe, who kicked 18.10 from his 14 matches, was the hero in Round 13 against St. Kilda after a miraculous kick over his head completed a stunning comeback win in Cairns. He averaged 10.9 disposals and 3.1 marks and showed his agility as a big man averaging 3.7 ground ball gets per game, ranked elite across the competition.

Hard-nut Berry was another impressive youngster in 2021 playing 17 games for the year. He played across the midfield and down forward, where he kicked five goals for the season. Berry attacked every contest with intent, and he never shied away from bigger, more experienced opponents. After averaging 9.1 disposals for the season, it was his contested work that stood out, as he averaged 5.2 contested possessions (rated above average), 4.1 tackles (rated elite) and 20.2 pressure acts (rated elite).

Playing as a lively small forward Rowe booted 15 goals in his 19 matches. He was a multiple goal kicker on four occasions, including in his first match where he kicked two goals and had 16 disposals. Standing at 173 centimetres, Rowe is an energetic small, who averaged 12.7 touches per game, pushing up the ground often to help transition the ball from the defensive 50 to the forward 50. As a small forward pressure is always a key element and he was ranked above average for tackles inside 50 with 1.1 per game.