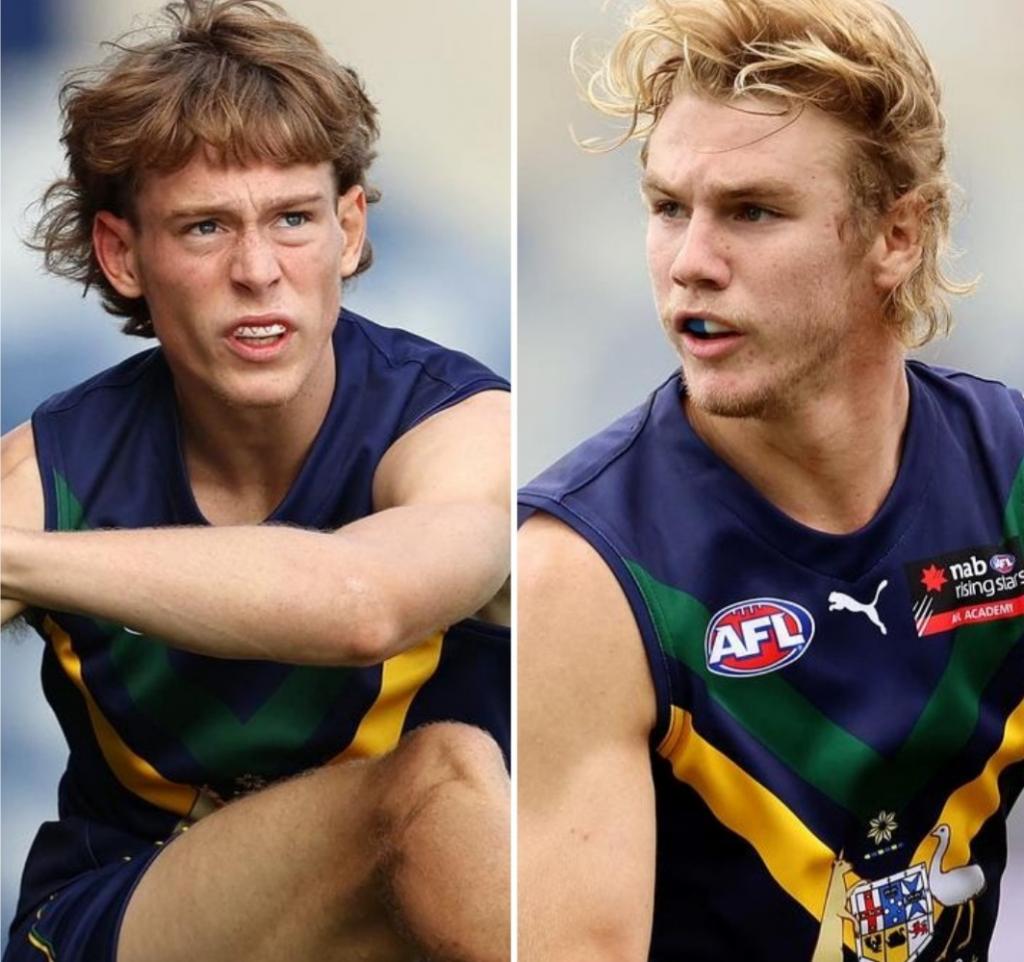 THE 2021 AFL Under 19 National Championships are poised to go ahead in some form on Saturday afternoon, as Western Australia hosts South Australia at Mineral Resources Oval. While the clash, originally scheduled for Sunday, was postponed in the wake of state border closures, eased restrictions will allow the South Australian squad to travel without the need to quarantine.

With extended squads already announced for both states and plenty of stars among them, keen draft watchers will already have a good idea of who to watch in the highly-anticipated fixture. With those players in mind, we take a look at where the game will likely be won, and a few of the marquee match-ups poised to light up the big stage. Stay tuned, as both sides will be revealed tomorrow.

Both engine rooms match up quite well, with some of the premier players from either side set to feature at the centre bounces. All eyes will be on pick one candidate Jason Horne-Francis, who skippers the South Australian squad and will likely anchor the Croweaters’ midfield alongside top-age deputy, Mani Liddy. Add Matthew Roberts into the starting mix, and SA has a strong, reliable mix of ball winners.

That trio is matched well by WA’s likely lot, set to feature Subiaco pair Neil Erasmus and Matthew Johnson along with East Perth battering ram, Kade Dittmar. The trio has some serious size about it, measuring up at an average of 188cm compared to the 183cm stature of SA’s group. That may be levelled out by the physicality of Horne-Francis and Liddy, with Roberts and Johnson the types who will respectively look to thrive off that inside battle.

In terms of depth, both teams bat pretty deep. SA will look to rotate recent League debutant and top 10 prospect Arlo Draper from the front six, along with Glenelg bull Hugh Stagg. Classy Port Adelaide father-son candidate Jase Burgoyne is another viable option from half-back, along with the likes of Hugh Jackson, Cade Kennedy, and Shay Linke off the bench. On the outside are a couple of pure wingmen in Nasiah Wanganeen-Milera and Isaac Birt, who provide some class and running power to further the team’s balance.

Western Australia’s depth is equally formidable. Corey Warner, the brother of Sydney’s Chad, and East Fremantle teammate Josh Browne would fancy starting spots, with the former also a capable wingman. The strong-bodied Angus Sheldrick has proved his worth as a mid-forward rotation piece, while James Tunstill is another East Perth ball winner who may feature, and Melbourne father-son hopeful Taj Woewodin can chip in from half-back. On the outer, Max Chipper is a running machine, while Brady Hough and Lochlan Paton have the versatility to contribute in multiple roles.

With a handy balance of inside grunt, class, and outside run, both midfields will be quite obviously central to their sides’ fortunes. WA’s representatives have already gotten a taste of how they may work together in a number of trial games, and while the SA squad will share plenty of familiarity, they may have some catching up to do. Having two leaders at the source certainly helps, though.

Plenty has been made about Western Australia’s array of tall forward options, with the Black Ducks boasting a true embarrassment of riches in said department. Leading WAFL Colts goalkicker Jye Amiss is an absolute deadeye and doesn’t need too many opportunities to impact with multiple goals, while versatile East Fremantle tall Jack Williams thrives aerially and looks a likely centre half-forward/ruck candidate.

Having been thrown into defence during WA’s trial games, Jacob van Rooyen booted 11.5 in his last two Colts outings, while Claremont teammate Eric Benning has also shown his developing forward craft of late and could pinch-hit from the ruck. The Black Ducks are not as strong at the other end of the ground, but Swan Districts standout Rhett Bazzo is a classy intercept-marker who should organise the fort well and Jack Avery can play above his 190cm standing. 195cm bottom-ager Jedd Busslinger may also feature.

South Australia’s starting key defenders, Zac Becker and Oscar Adams will certainly have their hands full. The former reads the play well and is built nicely at 92kg, but the latter will have plenty to do aerially at 198cm, while Cooper Beecken (191cm) may have to play slightly above his size. The Croweaters have some height and power of their own at the other end, with Jordan Lukac and Morgan Ferres strong starting pair supported by Lukas Cooke and Luca Whitelum off the bench.

We may well see some big bags of goals kicked given how well both sides stack up in attack compared to defence, at least in the tall department. With 2021 looming as largely a midfielder’s draft at the top end, opportunity awaits for the talls who can step up on the big stage and potentially shoot into top 15 contention.

With so many bigmen taking the field, the smalls will be equally important in helping capitalise on contest spills in attack or mopping up down back. South Australia will gain a good mix of speed and smarts from Central District pair Lachlan Grubb and Isaiah Dudley up forward, while the likes of Blayne O’Loughlin and Lewis Rayson are serious rebounders in defence. Rayson may also roll up to a wing, while O’Loughlin can play forward or impact in midfield at 171cm.

WA has some dangerous small forwards to watch, headlined by Fremantle NGA prospect Jesse Motlop. Along with Claremont’s Jahmal Stretch and East Fremantle’s Kaden Harbour, there is some serious skill, speed and smarts at the feet of WA’s talls. Down back, Swan Districts defender Bryce Watson has impressed of late, while Finn Gorringe would provide some physicality to go with the class of fellow Sharks, Jed Hagan and Judd McVee.

Whichever set of smalls can better capitalise on the work of their talls will contribute greatly to opening the game up and releasing a bit of pressure off the bigmen. With such a focus on the talls and midfielders, these are the types who may pop up in important moments or have an impact after flying under the radar.