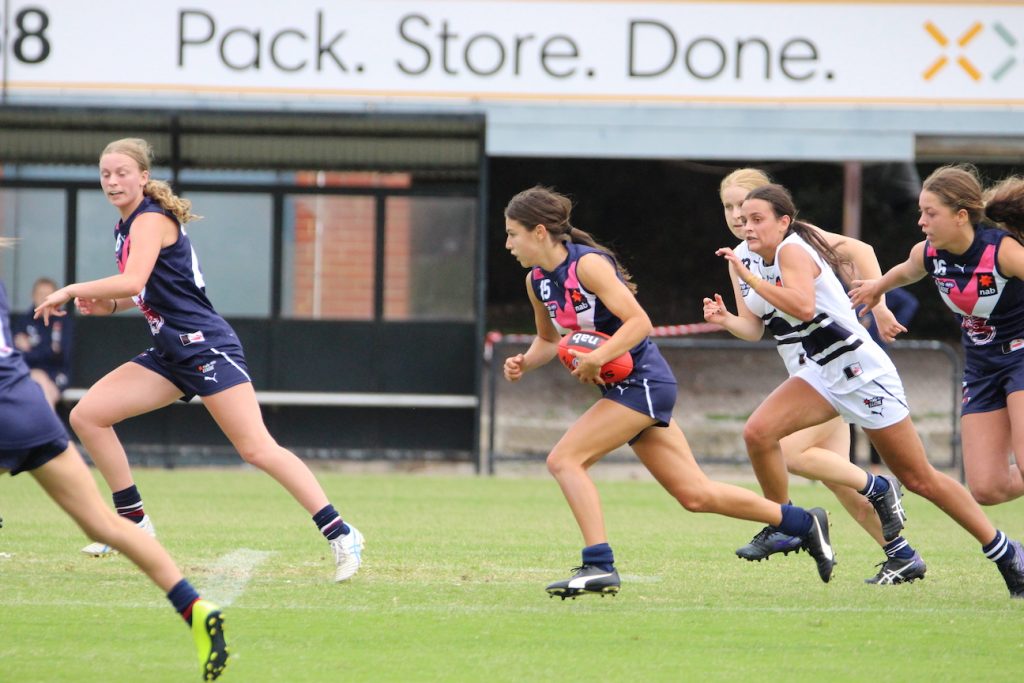 IN a new series looking towards the 2022 AFL Women’s Draft, we take a look at some teams that have outstanding prospects who showed plenty of promise in their bottom-age years to suggest the team might have plenty of potential for the next season. We continue with Sandringham Dragons, who have plenty of depth and a number of players already experiencing Vic Metro duties through both the Under 17s and Under 19s scenes.

One of the more eye-catching talents in the 2022 AFL Women’s draft crop is the smooth-moving Dragons midfielder, Hurley. She had a huge season in 2021, averaging 18.1 disposals, 4.7 tackles, 3.9 inside 50s and 3.0 rebound 50s in what was a real consistent effort across the board. A player who can do a lot of damage by hand or foot, Hurley is able to extract the ball from the stoppage both from first and second possession wins, and her evasion skills and quick burst, allow her to find the exit and create separation on her opponents. Not only can she win it in close, but she can win it around the ground, able to create run and carry down the ground time and time again. As the standout Dragons player in her bottom-age year – winning the best and fairest award – Hurley earned Vic Metro representation where after and Under 17s game – of 17 disposals, seven clearances and six inside 50s – she stepped up to the Under 19s team where she was solid with 11 touches, three tackles, three inside 50s and two clearances.

Starting the NAB League Girls season on fire in the opening round, unfortunately her standout game was cut short by an ankle injury that would see her ruled out for many weeks. She returned to the competition to play six games for the season, averaging 12.5 disposals, 3.2 tackles and 2.7 inside 50s. Continually developing her consistency, Hipwell’s size of 174cm on the inside is able to provide a bigger, stronger body in there, and she is able to get her hands free above her head to dish off the ball to teammates. She also tires to provide some good run and carry out of stoppages and going forward in transition, and can play in various positions as well. She is a player who leads by example, and whilst the ankle injury did impact the first half of the year, Hipwell also earned a spot in both the Under 17s and Under 19s Vic Metro squads. She had the 15 disposals, three marks, two clearances and four inside 50s and Under 17s level, before not being afraid against the older opponents, laying five tackles from six touches.

Hailing from the Northern Territory, Anderson represented the Allies at the Under 19s carnival and showed some promising signs further afield after progressing throughout the season for the Dragons in the NAB League Girls. Anderson averaged the 10 disposals, three marks, three tackles and two inside 50s at the AFL Women’s Under 19 Championships, and despite only playing four games at NAB League Girls level, dabbled in some of her eye-catching traits such as evasion which caught the eye. She also provided some good forward pressure with 3.8 tackles to accompany her 9.3 disposals, and was able to win the ball both on the lead and at ground level and look dangerous when inside 50. Anderson looms as one of the top NT prospects in 2022, and no doubt one to keep an eye on for the Dragons in the NAB League Girls competition.

Two other players represented the Under 17s Vic Metro squad in Keely Coyne and Tayla Jones, both of whom have shown some promising signs in the midfield. Coyne had an outstanding opening game of the season, and then was a consistent force in what was effectively her debut season after not being able to play a game in 2020. Coyne averaged 14.1 disposals and 4.7 tackles in 2021, providing the movement in transition to go from the middle third inside 50. Jones had a few less touches, but is one who can do nice things with ball-in-hand, averaging the 9.1 disposals and 2.1 tackles for the Dragons last season. Stepping up to Vic Metro she had similar numbers, showing she can rise to the occasion regardless of the level. Some other 2004-born regulars in the Dragons side include Lucy Mitchell (eight), Sascha Pribil (seven games), Amelia Luca (six), Ella Sciberras (five), Jasmine Betts (five) and Georgia Foran (five). For the 2023 AFLW Draft eligible players, Cameron Millias (five) and Mia Zielinski (three) caught the eye in their multiple games, whilst Lucia Marin and twins Jemma and Carly Witts each made their debuts.