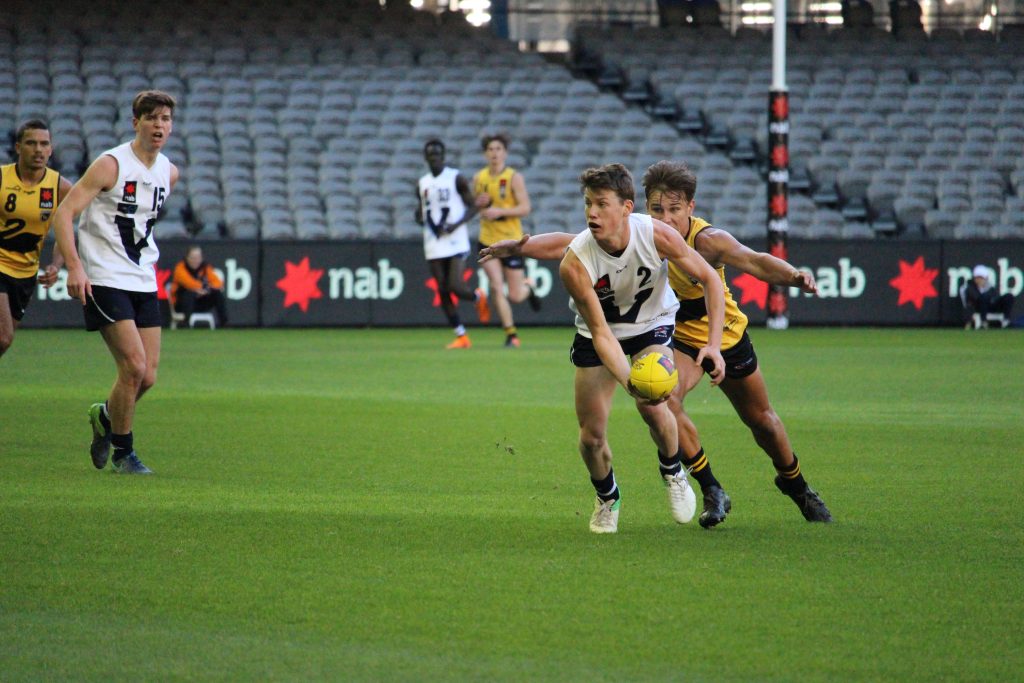 VOID of an Under 18 National Championships for the past two seasons and with fading hope of some competition next month, keen draft watchers have been itching to see the nation’s best prospects in one place. While interstate action is on the back burner for the time being, we can always reflect on what greatness we’ve seen and just why the annual carnival is so special.

One of the most important reasons for the championships is granting prospects the opportunity to play at the highest level possible, locking horns with others striving just as hard for the same dream. It’s true the cream always rises to the top, and the top is often marked by who earns the Larke Medal – awarded to the best player in each year’s Division 1 championship.

The recipient is immediately marked as a player to watch among generation next and while the award dates all the way back to 1976, there have been many more hits over the last decade or so. Since 300-game Carlton champion Marc Murphy won the award in 2005, nine Larke Medallists have been taken with the first or second National Draft selections.

Even more recently, Sam Walsh and Deven Robertson set new benchmarks with their respective disposal hauls at the championships, with the latter’s 30-touch average surpassing the former’s total disposal record, set just a year earlier. While Walsh was long viewed as the top pick in 2018’s crop, Robertson’s feats boosted his stocks massively in 2019.

Still, three of the last four Larke Medallists, including Robertson, have been taken outside the top 20 picks. They have shown their quality nonetheless, with 2017 winner Oscar Allen currently one of the competition’s most exciting young key position players, while 2016 recipient Jack Graham could not find a home until pick 53, but has gone on to win two AFL premierships with Richmond and looks a future captain.

Should we achieve some form of a championship this year, there are a bunch of top talents who would be worthy of such honours. Vic Metro’s Nick Daicos has proven a level above his peers in each game, so would be a hypothetical favourite, while fellow top pick contender Jason Horne would give him a great run in midfield for South Australia. Vic Country ball winner Ben Hobbs is another you could see taking over, while Western Australia’s Neil Erasmus always puts up eye-catching numbers.

Imagine Western Bulldogs father-son prospect Sam Darcy kicking bags for Vic Metro, or one of WA’s many key forwards like Jye Amiss or Jack Williams stamping their claims with massive goal tallies. Then there’s someone like Finn Callaghan, who could cement his rise to top five contention, while Under 16 carnival MVP Josh Rachele has the mercurial talent to shine again.

As was the case last year, we may not get a Larke Medal winner in 2021, but we can dream. With or without, the game’s future is in good hands with the next crop of draftees and there are many of them who would likely make themselves worthy of such credit should the opportunity present.