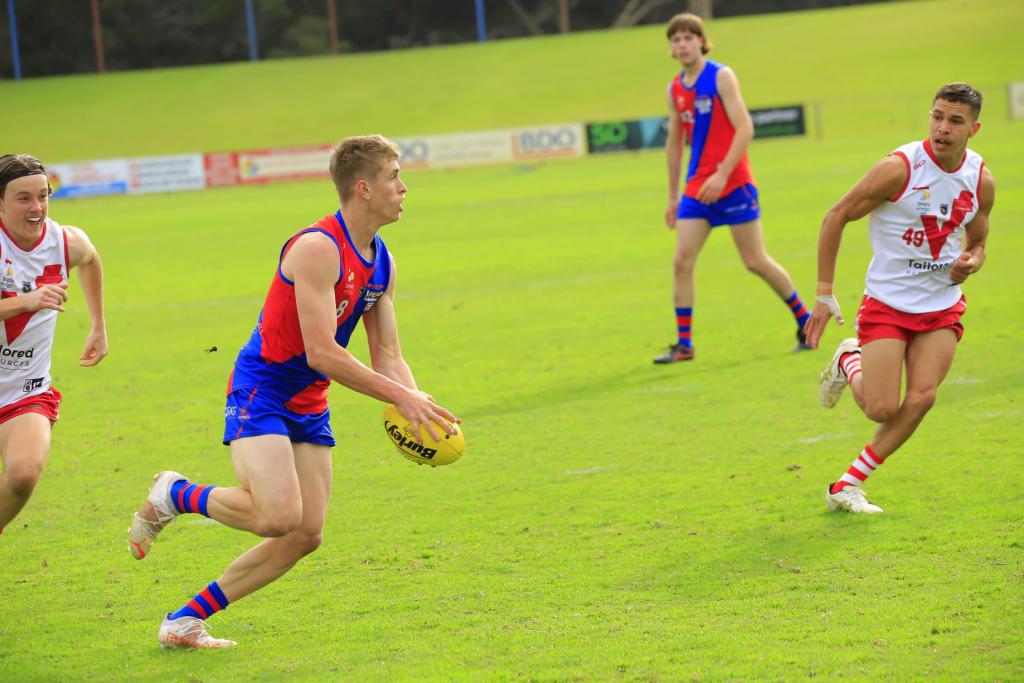 WEST Perth solidified its top five spot on Sunday morning, beating South Fremantle by 47 points to move a game clear of the sixth-ranked side. In what was the lone WAFL Colts fixture for Round 20, the Falcons kicked away with six goals to one in the opening quarter and despite South’s efforts to bridge the gap, skipped away again in term three to lead by 50 points at the last break. In the end, they were a class above in the 14.9 (93) to 6.10 (46) result. We take a look at a few of the top performers from either side in our Scouting Notes.

One of the many promising West Perth bottom-agers, Michael got involved in his side’s positive ball movement from defence and was aggressive in his forays further afield. He timed his runs well to either receive and run through the corridor, or push right up as a marking outlet to go inside attacking 50 by foot. 13 of his 16 disposals were kicks, including five inside 50s, and nine came from marks, exemplifying Michael’s style of play as an effective rebounder.

While not his best outing in the way of skill efficiency, Paton still managed to get the ball in dangerous areas as he played almost exclusively off half-forward. The state Under 19s squad member again worked hard up the ground and looked to use his class on the way back, while contributing his usual tackling efforts with five overall. He displayed smooth movement in possession, finishing with 19 touches and six inside 50s in the Falcons’ win.

Dixon was everywhere at times in the first half and started like a house on fire, booting two goals in the first 15 minutes. He brought great energy to the contest with his power and turn of speed, creating some positive run and explosive feats around the ground – including an outstanding overhead mark for his first major. The 19-year-old midfielder-forward continued to drive West Perth forward after half time but as a touch more patchy compared to his grand opening, ending up with 15 disposals and 2.2.

Along with fellow bottom-ager Michael in defence, Julian was a solid member of the back six. He showed nice bits of poise on the ball to find targets in tight spots when roaming up the ground, while also proving strong back in defensive 50. In a solid performance which yielded 21 disposals and six marks, Julian moved the ball on quickly and took full advantage of a 50m penalty to hit the scoreboard in term two.

Having been utilised as more of a key position outlet at either end of the ground, the 192cm Bevan has moved into midfield of late and continues to thrive. The state Under 17s squad member racked up a game-high 27 disposals, including seven marks, and six inside 50s. He used his big frame around the contest to bustle away and roll would-be tacklers off his back, while showcasing his clean hands both at the coalface and in a string of impressive overhead marks during term three. He snuck forward before half time to claim a goal, making for a well-rounded outing.

West Perth’s fourth state Under 17s squad member, Scaife is one for Fremantle fans to watch as yet another Dockers NGA prospect. The 195cm ruck/forward was primarily stationed in attack and showed some promising signs, moving well for his size with ball in hand. He notched the game’s first goal with a confidently struck set shot from 50m, before adding a couple of minor scores among his 11 touches for the day.

In his first game back from injury since Round 4, Brown was eased into things as he started the game in attack. He began brightly too, presenting well at half-forward and sneaking on the end of a lovely passage to put through South Fremantle’s first goal of the game. He was then shifted into midfield after quarter time where he managed to register 13 disposals and five tackles in what was a solid return game for the 18-year-old, who was a state Under 16 representative in 2019.

A regular ball winner for South Fremantle, Drage went about his usual business with 22 disposals and a goal on Sunday. The solidly-built midfielder put his frame over the ball and was typically effective by hand, helping release to the outer while also working back when South lost the initial midfield battle. Drage’s goal came in the second quarter, as he received on the move and waltzed into about 40m, steadying nicely before converting his shot.

Stephens has been one to stand up week-after-week for South Fremantle, and did so once again with a team-high 26 disposals in Round 20. He started in midfield for the first and third terms but also spent plenty of time in defence, where he would fight to win the ball back and move it quickly on the rebound. Stephens was relatively effective with the ball and pulled down a strong contested mark in the third quarter, capping off another solid outing for the 18-year-old.

A great point of difference in South Fremantle’s midfield with his speed, Bourne provided some much-needed spark for the Bulldogs. The 2005-born prospect did everything on the move and kept moving after each touch, chaining together a few handy passages to break the lines going forward. With 19 disposals, five tackles and five inside 50s, Bourne wasn’t afraid to show a bit of cheek and backed his flair up with impactful play.