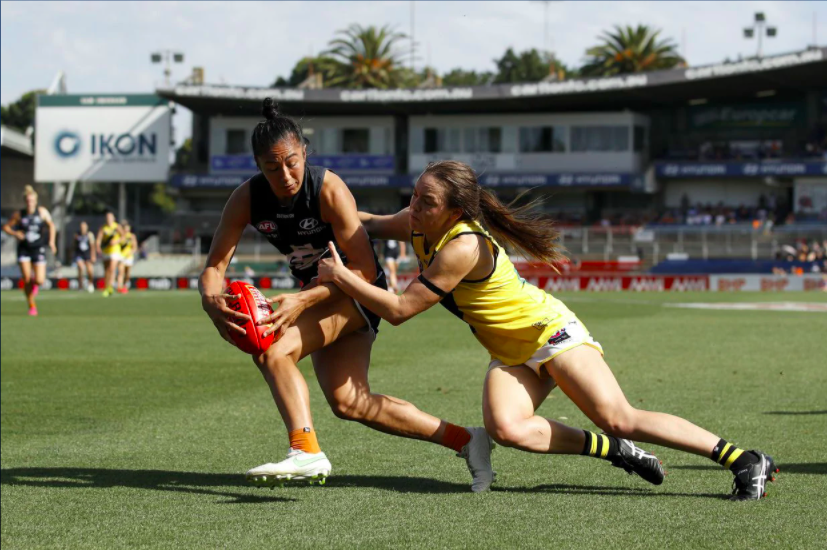 IN an early look at the upcoming AFL Women’s 2021-22 season, Draft Central checks out each of the 14 clubs over the next three weeks ahead of preseason commencing. Next up is Carlton, a side that missed out on finals with the five wins from nine matches.

Carlton provided plenty of highlights throughout the 2021 AFL Women’s season, scoring the second most points of any side, and the only other team with Adelaide to surpass 400 points (415). Their percentage was far superior to any of the bottom seven sides, but only picking up the five wins hurt, falling a win and percentage outside the top six sides. Despite bringing in some more experience such as Elise O’Dea, the Blues could not quite get going, losing their first two games and being 3-4 until making a bolt late to win their final two matches, only to fall short.

Carlton will head into season 2021-22 with one of the youngest lists, bringing in a quartet of teenagers following a busy off-season. Four best 21 Blues all found new homes, with Chloe Dalton and Katie Loynes heading to the GIANTS in exchange for Jess Dal Pos who will provide some stability and leadership across the field. Tayla Harris was one of the most talked about players leading into the off-season and managed to land at Melbourne, whilst a last minute deadline deal resulted in Jess Hosking heading to Tigerland to join twin sister Sarah. With three others delisted – including ruck Alison Downie who went to Collingwood – the Blues needed to restock at the draft. They picked up talented defenders Annie Lee and Brooke Vickers, with slick midfielder Keeley Sherar and athletic key position talent Imogen Milford – who finished second in the VFLW goalkicking – all recruited to the club. With and additional selection, the Blues picked up Sturt’s Jess Good to help the ruck stocks, with the dual code player – also a superb basketball – making the jump up to the AFLW.

Carlton has no troubles scoring, it showed that by being the second highest scoring side, and Darcy Vescio winding back the clock with a sensational season. With plenty of talent through the midfield, Carlton is always a threat for the title. They are a fair bit younger than in previous title challenges, but with Daniel Harford at the helm, anything is possible. They recruited to cover positions in the back half of the ground, as well as key position options, and if the playing list can remain fit, i is hard not to see them in the conversation for finals.