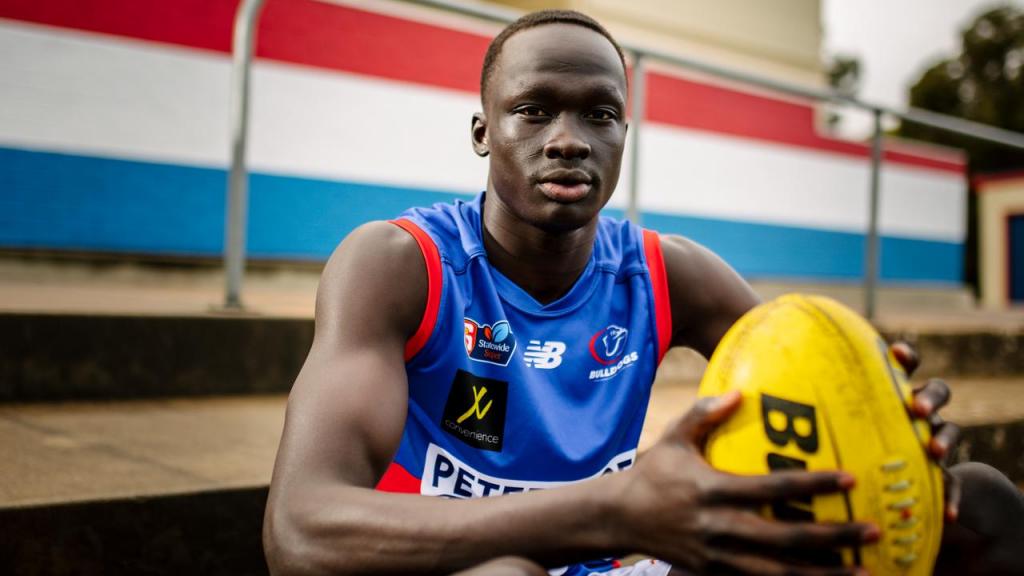 FAST-DEVELOPING Central District key defender Leek Alleer has caught the eye in 2021, playing 10 SANFL League games since making his debut in Round 7. The 20-year-old recently earned an AFL Draft Combine invite and was the sole ‘mature’ age player to do so, having shown plenty of promise with his raw athleticism and intercept marking prowess at 195cm.

He was part of Centrals’ 33-point League win over Adelaide on Saturday, collecting a career-high 14 disposals and marking senior-listed Crows youngsters like Nick Murray and Tariek Newchurch in his defensive duties. We put Alleer’s Round 18 SANFL League performance under the Player Focus microscope this week, breaking down his performance quarter-by-quarter.

With Central District getting off to a hot start, Alleer did not have all that much to do in defence but still managed to get involved. He pressed a high line among the defensive set-up and looked to force intercepts on long Adelaide kicks to contests.

He often took back position and trailed his opponents to get more effective runs at the ball in flight, but did not manage to clunk any marks throughout the opening term.

Alleer’s second efforts were impressive though, landing like a cat once he had contested in the air to apply pressure at ground level. One instance saw him fly in a defensive 50 pack and put enough contact on Fischer McAsey to impact the Crows swingman’s shot on goal.

Overall, it was a promising start as Alleer navigated his way to many contests and impacted them well. He notched two kicks, one handball, and one inside 50 for the term.

The Bulldogs continued to control the contest in term two, which contributed to Alleer’s least impactful quarter in terms of pure numbers. He still managed to provide presence without the ball, proving difficult to beat in the air or on the lead with his pace and power.

Alleer’s best moment for the quarter was a four-grab intercept mark on the wing, where he pushed off his direct opponent at the last minute and juggled the ball to his chest en route to hitting the deck. Most of his other work was done flying at aerial balls and getting a hand in to spoil his opponent, proving effective when competing from behind.

He finished off the half with a single kick and handball, plus his first mark for the day. Numbers aside, the 20-year-old had his moments throughout another promising period with Centrals on top.

Alleer had his hands full to start the second half, as Adelaide’s Nick Murray shifted forward to provide a tough match-up for the youngster. He fared well, spoiling any long ball which came their way and holding his ground in jostles for position.

He continued to leap at the ball in eye-catching fashion, using all of his allotted runway to impact a ball inside defensive 50, and latter attacking the contest well to clunk an intercept mark at half-back.

Generally playing within his limits in possession but breaking them in the air, Alleer notched three kicks and two marks in the third term to carry on his steady first half momentum.

While Centrals looking to slow the game down and see out their lead, Alleer saw a bit more of the ball in term four and capped off his performance strongly in defence.

He used the ball efficiently by foot, helping Centrals stretch the ground by either switching inboard or kicking wide to spark some sort of transition. Alleer also added a handball in the mix, dishing off after marking strongly in the hole at the top of the goalsquare.

His numbers in the fourth quarter were the best for the day, notching another four kicks, one handball, and three marks in a solid period to round out the Bulldogs’ big win.

Having recently earned a National Combine invite, there is clear AFL interest in Alleer. As a key defender who has previously played up on a wing and in the forwardline, his versatility and upside are exceptional. The 20-year-old has shown a strong rate of improvement over the last couple of seasons, and is a developable key position prospect who clubs can look to mould to their system in time. His strengths are obvious and eye-catching, with plenty of value to be had in a super-athletic talent who intercepts with such confidence. He remains quite raw and there are still areas to tweak, but Alleer is building nicely at League level.